Analytics and trading signals for beginners. How to trade the EUR/USD currency pair on November 9? Analysis of Friday's deals. 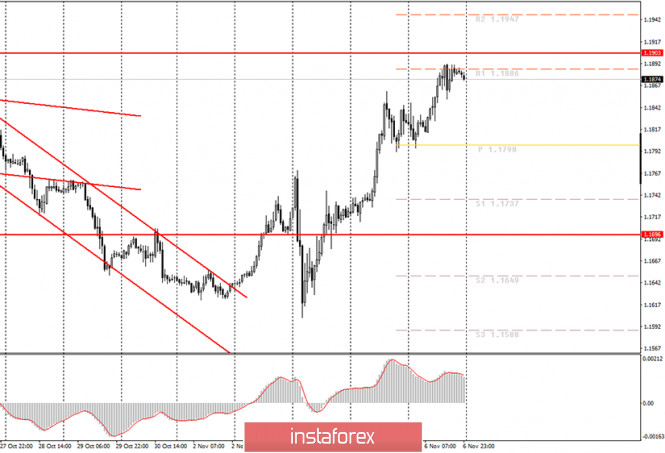 The EUR/USD currency pair continued to trade very actively on Friday, November 6. By the end of the trading day, it reached the upper line of the side channel of 1.1700-1.1900, which has been very active in recent months. Naturally, the movement of recent days was caused only by the US election process, as well as further counting of votes, and not by the technical picture and other factors. Therefore, the main thing now is for the markets to calm down, and the pair's movement to become familiar again, every day so to speak. As for the prospects for the near future. Novice traders still do not have a trend line or a trend channel at their disposal. Thus, you need to start now either from important levels or from fortune-telling on coffee grounds. It is impossible to predict where the pair will move at the beginning of next week. Moreover, at the moment, the name of the winner of the election has not yet been announced. The chances are kept by both candidates, so what the reaction of the markets will be if, for example, the winner in the end is not the one on whom the majority bet, again, it is impossible to predict. One thing is now more or less certain. If the quotes fail to overcome the level of 1.1903, then the decline will begin within the correction. Moreover, this correction has been brewing for several days.

Vote counting continued in the United States on Friday, but there are still no final results. We can conclude that the fall in the US currency in recent days is due to political confusion, which is already there and which will continue to be. We remind novice traders that this year is a special US presidential election. Donald Trump is a very odious person and will not leave his post just like that. Also, the current President is constantly distinguished by unsubstantiated statements and discouraging actions. For example, on November 4, Trump declared himself the winner of the election. Even though there are no final results yet. Not surprisingly, since November 5, Trump has consistently accused Biden and his team of rigging the vote. He did this until November 3. Now all of America is preparing for a victory for Joe Biden, who is far ahead in the polls, but also preparing for legal proceedings, because Trump is determined to review the results of the voting in several states. In addition to this extremely important topic, important macroeconomic reports were published in America on Friday. First, this Nonfarm Payrolls, which shows the number of new jobs created outside of agriculture and is considered an extremely important indicator of the state of the labor market. The actual value was equal to 638 thousand with a forecast of 600 thousand. The unemployment rate also turned out to be stronger than expected – 6.9% in October against a forecast of 7.9%. However, this data did not help the dollar in any way, as the markets were completely focused on the US elections.

On November 9, the following scenarios are possible:

1) Purchases of the EUR/USD pair continue to be relevant. However, at this time, the movement is very strong, the MACD indicator does not have time to discharge to form new strong buy signals, and there is no trend line or channel. In general, clear signals are now extremely difficult to get, the fundamental background is extremely strong, and the situation for trading for novice traders is not the most favorable. We expect a correction on Monday.

2) Trading for a fall is not relevant at this time, although it is a new drop in the quotes that now has more chances and probability. Theoretically, novice traders can try to work out a new sell signal from the MACD with targets of 1.1798 and 1.1737, but do not forget about stop loss. We recommend that novice traders wait for the markets to calm down.

Price support and resistance levels – levels that are targeted when opening purchases or sales. You can place Take Profit levels near them.

MACD indicator(14,22,3) – a histogram and a signal line, the intersection of which is a signal to enter the market. It is recommended to use it in combination with trend lines (channels, trend lines).

Interesting? Write a comment below.
 #Analytics and trading signals for beginners. How to trade the EUR/USD currency pair on November 9? Analysis of Friday's deals.
Forward 
Backward 