The AUD/USD pair failed to consolidate within the 73rd figure. Yesterday's strengthening of the US dollar, as well as the ongoing conflict between Canberra and Beijing, did not allow the Australian one to stay on the reached highs. This suggests that the prospects for the growth of the AUD/USD pair primarily depend on the condition of the US dollar, which, in turn, is trading amid a conflicting fundamental background. This is further complicated by the fact that the "Aussie" is at the borders of a wide price range of 0.70-0.73. The last time the indicated currency pair tried to reach 0.73 was at the end of August this year. However, buyers only managed to consolidate in this price area for a few days, followed by a decline. Looking at the wider time range, we see that the pair traded above the level of 0.73 for the last time in 2018 (up to and including September). Since then, the bulls of the AUD/USD pair failed not only to rise to the 0.74 price level, but also to consolidate within the level of 0.73.

This "historical digression" suggests that the buyers of the pair are now facing a difficult task: they are located near the limits of quite strong resistance levels, while the fundamental background does not contribute to the impulse growth of the AUD. As mentioned above, the upward prospects for the AUD/USD pair depend only on the weakness of the US currency, which is not in a hurry to give up its positions without rising. 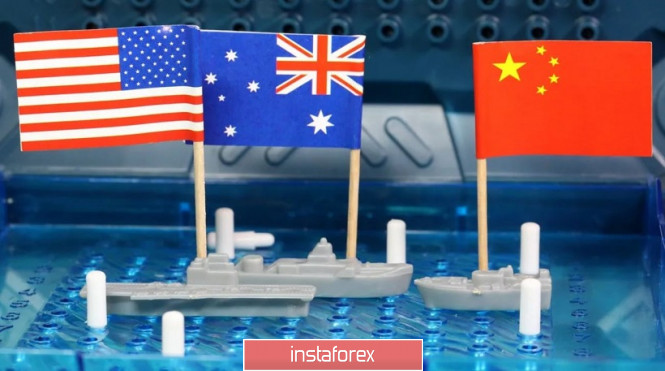 The US dollar is currently trading amid conflicting fundamental backgrounds. On the one hand, there are political events in the US, where Trump expressed his intention to prolong the election by recounting votes. On the other hand, there is positive news regarding COVID-19. One of the vaccines under development showed a good result in the third phase of trials, which surprised the markets yesterday. The dollar rose, together with the stock and oil market. But as a rule, such emotional fundamental factors are only temporary. Therefore, some dollar pairs (in particular USD/JPY and USD/CAD) are showing a price pullback today.

In this regard, the Australian dollar showed an "early" result: The AUD/USD pair returned to the level of 0.72 yesterday from the reached high at 0.7341. An additional pressure on the pair was the publication in the Chinese English-language edition "China Daily". Here, the author of the article warns that Australia must make a choice as soon as possible: either Canberra stays away from the conflict between the US and China, or the Australian economy will suffer continuously. It should be noted that the publication of the resonant article was preceded by joint naval exercises of Australia, India and the United States. This is the first such exercise in the past 13 years. According to some experts, this publication is a warning on the part of Beijing. China Daily is an influential and largest (circulation of almost 700 thousand) newspaper, which is oriented "for export". Therefore, such material can be viewed through the spectrum of recent events, including those of sanctions.

You should recall that steel mills in China received an official verbal notification of the termination of imports of Australian coal in early October, which led to a price decline for marine coking coal. According to the specialized media, Mongolia replaced Australia as the leading supplier of coking coal to China. Moreover, an anonymous Chinese source told the Reuters news agency that imports of some Australian goods have now virtually ceased and the same could happen with other products. It is rumored that China will discourage imports of Australian cotton, wine, beef and barley. At the same time, wheat, copper concentrate and iron ore are also in question. Media reports said that this is not an official ban, but technical barriers. For example, new import tariffs or new sanitary standards. By the way, there are already the first "victims" of this Chinese policy. It became known recently that several tons of Australian lobsters rotted at Chinese customs.

However, China does not officially admit that it is in a state of trade war with Australia. All customs barriers are explained either by technical reasons – the workload of port warehouses or by regulatory innovations (new sanitary rules, etc.). The true reasons for such trends are announced informally, including through the Chinese media. Therefore, the Australian-Chinese conflict exerts background pressure on the AUD only: the Australian dollar is not able to organize its own offensive, but it may well dominate the AUD/USD pair if the US currency weakens.

All this suggests that the pair retains the likelihood of retesting the resistance level of 0.7350 (two-month price high). If this price area is reached, it is suggested to close the purchase, simultaneously considering the option of short positions with the goal of 0.7210 (the upper limit of the Kumo cloud on the daily chart).