Chaos should be expected in the United States. Overview of USD, CAD, JPY

A day before the election, Biden had an 80% chance of winning. Yesterday, the situation completely turned in Trump's favor, but as night time came, there was a reversal in favor of Biden. Due to this, Trump accused the Democrats of casting votes and demanded a recount. It is highly likely that the new US president, whoever wins, will have incomplete legitimacy, and the country will be in chaos caused by the decentralization of government.

Following Trump's victory in several states, there were strange changes in the vote count. In Virginia, 100 thousand extra votes were allegedly mistakenly added to Biden's vote, while in Wisconsin, the chances of Democrats' victory remained purely mathematical, but in Michigan, there is no doubt that it will go down in history. 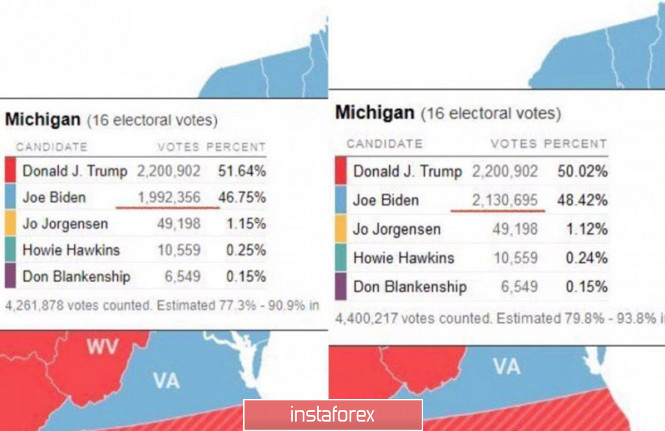 As a result, a recount in several states is inevitable. This recount may drag on, and it is quite possible that the Supreme Court, in which the Republicans have a majority, will decide whether it is correct or not.

It should also be noted that the Democrats failed to take control of the Senate. The predicted "blue wave" scenario did not take place, so the victory of Biden or Trump will not give a decisive advantage on either side, which means that the uncertainty period will continue for a long time.

The CAD net short position is still significant, as there are only small weekly changes. The fair price is significantly higher than the spot price, but so far, financial flows are neutral and do not show directions. 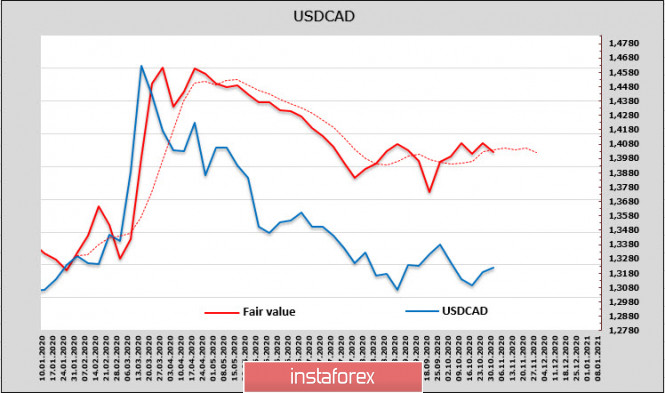 The demand for CAD directly depends on the election results, and the high level of uncertainty does not allow us to form a reasonable forecast. Against this background, the USD/CAD pair is likely to return to the level of 1.34.

The situation in the futures market of the yen is immediately changing. The previous report showed a significant reduction in the long position, which suggested changes in investor sentiment in favor of the dollar, but the latest report is exactly the opposite – in the election week, the net long position for the yen increased by 462 million to 2.142 billion. As a result, the estimated price declined again. 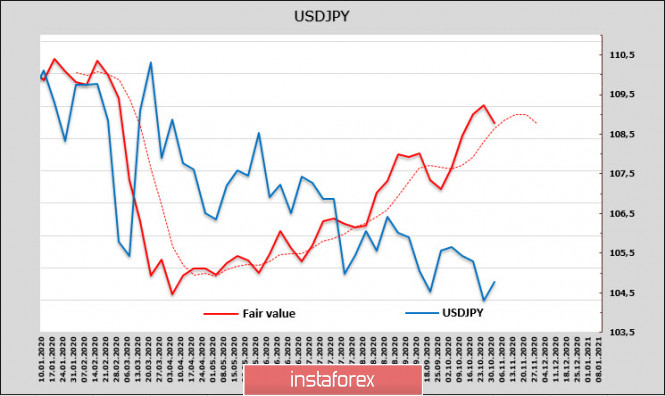 If the issue regarding the US election persists, the yen will be in demand as a protective asset, no matter how the domestic economic situation will help it to strengthen. Meanwhile, things are frankly bad – exporters are almost not buying yen, since export volumes have not recovered. The manufacturing sector did not also enter the growth zone. According to Jibun Bank, PMI amounted to 47.7p in October, while the composite index including the services sector amounted to 48p. 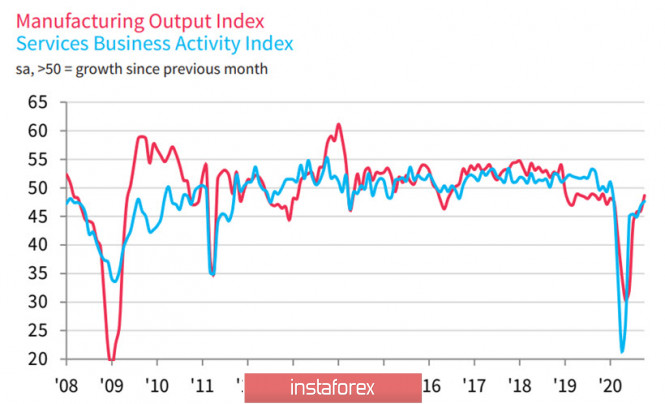 Tomorrow, there will be a published report on the dynamics of average wages and household expenditures for September, from which deterioration is expected. An additional reserve of 10 trillion yen was planned in Japan's budget, and it was expected that this would be enough until recently. However, after Abe leaves, it turns out that the government is preparing another additional item of expenditure in the amount of 10 to 15 trillion yen, which will be used for two purposes – for subsidies for employment, which will begin to be used after December and the Japanese version of import substitution – companies will be encouraged to relocate their entire production and supply chain to Japan.

These measures will help lower the quotes of yen. To sum up, we can assume the following: Both the Cabinet of Ministers and the Bank of Japan will soon make efforts to weaken the yen, which is possible if external demand increases. This will be primarily associated with a possible victory of Trump. Biden's victory, in turn, will lead to a sell-off of defensive assets, so the yen is likely to weaken as a result. The transition of the confrontation to the court will lead to increased uncertainty, and in this case, yen's price will be forced to increase.

Technically, the support zone 104.00/20 can still hold, although everything seems that it is preparing to be broken. The Bank of Japan will hold its rate through interventions. So in case that this support breaks down, buying will be considered with the goal of returning to the levels of 105.00/50.

Interesting? Write a comment below.
 #Chaos should be expected in the United States. Overview of USD, CAD, JPY
Forward 
Backward 