Demand for risk rose due to the US elections. Overview of USD, EUR, and GBP

The US dollar is weakening after Biden won the necessary 270 electoral votes, while the CFTC report on the dynamics of futures and options gives the opposite picture – investors clearly reduced their short position on the dollar right after the elections. It seems that they assumed that the Democratic Party will either not win or would be completely unconvincing, which will prevent them to launch the expected "blue wave" scenario. 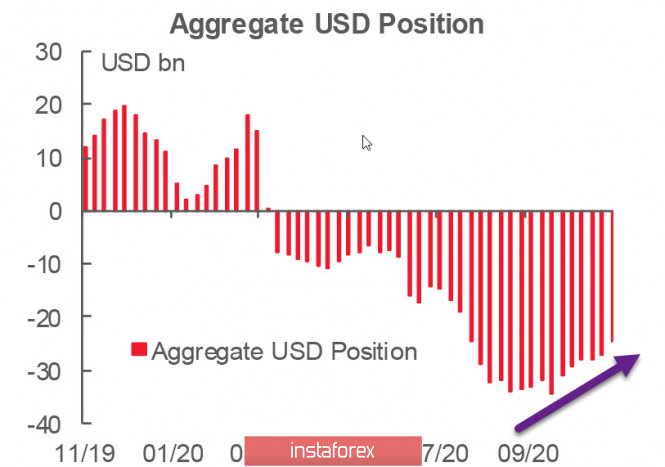 The situation with the US elections does not look obvious at all, even though Biden was already been announced as the winner and some, especially impatient leaders of other countries, have already managed to congratulate him. Trump, in turn, intends to move the confrontation into Judicial Court, since it was mentioned earlier that there has been some falsification in the results.

There is currently a high possibility that Biden will not receive the necessary legitimacy by the time Trump's term is done. The only way to get out of the confrontation is by colluding with the elites, that is, by agreeing with the Republicans to "merge with Trump" and prevent the case from being sent to the Supreme court.

In this regard, risky assets will be in favor this week, as oil prices are likely to resume and the stock market is likely to grow. A strong market report does not give reason to expect Fed's new monetary stimulus in the near term, but collusion will allow a new aid package to pass through Congress, which will distract attention from the election.

The euro's net long position sharply declined again, this time by 2.384 billion to 20.552 billion. The euro is steadily rising after Biden declared himself the winner, but apparently, traders did not expect Democrats to win.

Given the fact that ECB gave a clear signal about preparing for the introduction of another support package at the meeting in December, due to a sharp increase in COVID-19 cases, which forces new restrictions to be introduced, the euro does not have an internal driver for continued growth, but the results of the US elections are still in the leading edge.

The EUR/USD pair broke through the resistance level of 1.1878, but the momentum is weak and more emotional.

On the other hand, the Sentix confidence indicator will be published today, while the ZEW index will be released on Tuesday. Rising fears are expected due to new restrictions, which will put pressure on the euro. We assume that the growth to 1.20 will not take place. It will be stopped in the 1.19750/70 zone and the euro will decline again to the unfulfilled goal at 1.15.

Although GBP short positions rose by 373 million to 916 million over the pre-election week, the pound feels more confident than before the elections and is likely to continue rising. The pound's fair price is still much lower than the spot price, but we should expect an upward turn, since with Biden's victory, the most convenient scenario for the Johnson Cabinet in negotiations with the EU is being implemented. 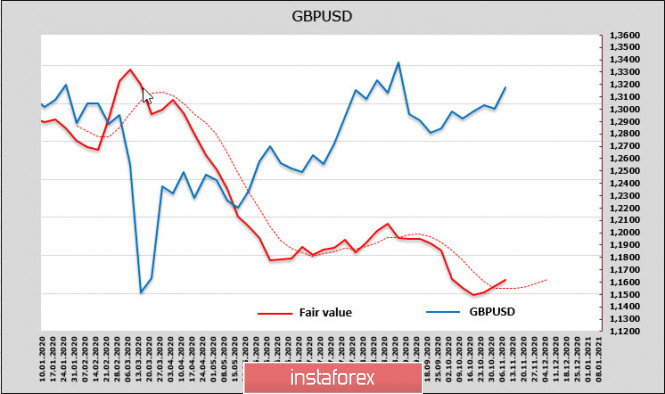 Against this background, Biden's victory for Britain is disadvantageous, as Democrats have repeatedly stated that the trade agreement between the US and UK will not be ratified if the latter's dispute with the EU over Northern Ireland is not resolved. However, Johnson has now a reason to make formal concessions on the Northern Ireland issue in order to get trade preferences with both the US and the EU, and for the sake of such a result, Britain delayed negotiations in order to act simultaneously with the US. Trade talks are due to be completed at the EU summit on November 15, and there is a high likelihood of a deal.

There will be a lot of macroeconomic data that will be released this week, on the basis of which an assessment of the future actions of the Bank of England will be made, which indirectly recognized the need for more active support for the economy, raising the asset purchase program above forecasts.

Technically, the pound will start the week positively. It is very likely that it will consolidate above the resistance level of 1.3177. The goal is resistance zone 1.3250/70.

Interesting? Write a comment below.
 #Demand for risk rose due to the US elections. Overview of USD, and GBP, EUR
Forward 
Backward 