EUR/USD. The battlefield is the courtroom. US elections still set the tone for trading

Biden or Trump? This question has been plaguing the minds of traders over the past week. The dollar index, in turn, followed the (still) current President. Immediately after the voting period, the greenback strengthened its position throughout the market but then began to gradually dive down, especially after the Democrat took the lead in key states Over the weekend, it became clear that Joe Biden is almost one hundred percent likely to become the 46th President of the United States. Therefore, the market opened with a fall in the Dollar. The dollar index collapsed to two-month lows (92.198), showing a downward movement. If this trend continues, the index may also update 7-month lows if it collapses in the area of the 91st figure. All prerequisites for this outcome are already there.

During the election campaign, the Dollar was used by the market as a protective tool. Numerous experts have voiced worrying post-election scenarios, especially if the main candidates get about the same number of electoral votes. During the first day after the vote, this scenario seemed the most realistic: Biden led by a minimal margin, while Trump showed unexpected strong results in many states. Therefore, the day after the election, the Dollar strengthened its position as much as possible, reacting to a possible political clinch. In particular, the EUR/USD pair fell to the bottom of the 16th figure which meant 4-month lows. As soon as the pendulum swung in Biden's favor, the Dollar was hit by a wave a big sell-off, amid increased interest in risk. Over the weekend, it became known that Biden still pulled out a victory in Pennsylvania, thanks to which he gained the necessary 270 electoral votes to win. 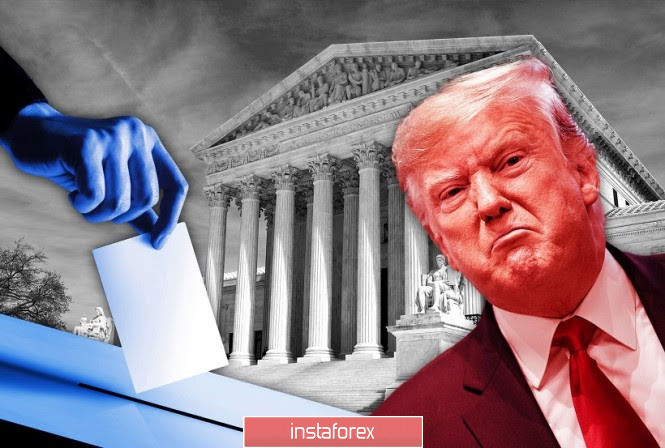 At the opening of trading, the dollar index continued its southern rally and the EUR/USD pair, respectively, headed towards the 19th figure. In my opinion, this trend is not due to the fact that the elections have ended but to the fact that they are de jure continuing.

According to Reuters, Trump does not plan to concede. In the coming days, he will implement a legal strategy for the fight. Representatives of the Republican's staff have already filed numerous lawsuits over alleged election violations. Some judges (in particular, in Georgia, Michigan and Nevada) rejected the relevant claims, refusing to open legal proceedings. However, in Pennsylvania, for example, the justices sided with the Republicans and ordered the postponement of some preliminary ballots and gave Republican observers greater access to the vote count.

We are talking about those votes that came in the mail after election day. The postal votes are the ones to be investigated by Donald Trump's lawyers. The head of the White House insisted that the imperfect remote voting mechanism will allow his opponents to falsify the election results. Now, Trump is trying to convince the judges that his assumptions are confirmed According to the lawyer of the American leader Rudolph Giuliani, representatives of the US President may file up to ten lawsuits in the coming days concerning the elections in the country and the recount of votes. In particular, Giuliani is pushing for a recount of the votes that were cast in the States of Pennsylvania and Michigan. Trump's team wants to prove that hundreds of thousands of ballots can be invalid.

If last week, dollar pairs reacted to news streams from polling stations, this week, the focus will be on the US district courts. If the judges consistently refuse to consider Trump's claims, the Dollar will continue to lose its position and vice versa. If the will of hundreds of thousands of Americans is questioned, anti-risk sentiment in the market will increase again. 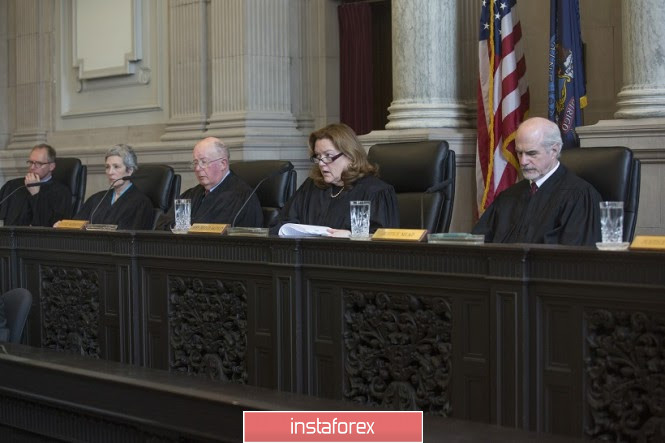 Despite Trump's formidable speeches, as well as the belligerent intentions of his lawyers, most experts doubt that he can turn the tide in his favor. Although all analysts recognize the fact that the Republican team uses all possible legal levers. At first they will protest vote by mail in the courts of the individual States, and then reach the Supreme court. Most American experts agree that all these lawsuits will not help change the results of the vote. A number of states may have a recount but this will not change the result of the election.

If we talk directly about the Euro-Dollar pair, any more or less large-scale decline in the price should be used to open long positions. The nearest target of the upward movement is 1.1920 which is the upper line of the BB indicator on the daily chart. The main target is located slightly higher at 1.2000. In this price area, it is advisable to cover purchases, as a negative reaction from the European Central Bank is likely to happen. ECB representatives have repeatedly criticized the overvalued Euro exchange rate so the approach of EUR/USD to the psychologically important target will be another reason for the corresponding verbal pressure on the single currency.

Interesting? Write a comment below.
 #EUR/USD. The battlefield is the courtroom. US elections still set the tone for trading
Forward 
Backward 