EUR/USD: plan for the European session on November 2. COT reports. Euro buyers under pressure. Bulls have nothing to catch

The euro was under pressure after buyers made several unsuccessful attempts to turn the market over to their side due to the good fundamental data on the European economy. However, the new quarantine measures in the eurozone countries are likely to dash all hopes for a faster economic recovery, which could be observed in the third quarter of this year.

Before talking about today's prospects for the pair's movement, let's look at the situation in the futures market, where the positive delta has been contracting for the fifth consecutive week. This once confirms the fact that the pair is in a downward trend, especially after the news about the partial lockdown of Germany and France. Great Britain joined the same countries over the weekend. The future prospects for the recovery of the European economy are now clouded due to the second wave of Covid-19, and no one knows how much the service sector will sink, which forces traders, if not to sell the euro, then clearly choose a wait-and-see attitude, especially against the background of the start of the presidential elections in the United States. The Commitment of Traders (COT) report for October 27 showed a reduction in both long and short positions. Despite this, buyers of risky assets believe that the bull market will continue and so they prefer to act with caution. Thus, long non-commercial positions fell from 229,878 to 217,443, while short non-commercial positions also fell to 61,888 from 63,935. The total non-commercial net position decreased to 155,555 from 165,943 a week earlier. However, the bullish sentiments for the euro remains rather high in the medium term. The more the euro will decline against the US dollar at the end of this year, the more attractive it will be for new investors, especially following the US presidential elections, when additional pressure on the market on this issue eases.

Buyers of the euro have one task today, which is to regain control of the resistance at 1.1651, which will not be easy. Even with good data on the manufacturing sector of the eurozone countries, it is unlikely that the euro will be able to demonstrate large growth. Getting the pair to settle above 1.1651 and testing it from top to bottom will be a signal to open long positions in order to restore EUR/USD to the resistance area of 1.1701, where the moving averages play on the side of buyers. In this case, trading may move to a horizontal channel. If the bulls rise above 1.1701, the target of the bulls will be the high of 1.1754, where I recommend taking profits. If the euro is still under pressure, which is most likely, you can consider buying EUR/USD but only on condition of a false breakout at the 1.1617 level. In case of bad macroeconomic data, I recommend postponing long positions until we have tested the next low in the 1.1585 region, counting on a correction of 15-20 points within the day.

Sellers need to form a false breakout in the resistance area of 1.1651, which will be another signal to open short positions in continuing the emerging trend. The first target will be a low of 1.1617, but I recommend that you only take profit after the pair reaches support at 1.1585. If the data on production activity manages to surprise traders, and the bears are not active in the resistance area of 1.1651, it is best to postpone sell positions until we have tested Friday's high at 1.1701, or open short positions immediately on a rebound from resistance at 1.1754, counting on a correction of 15-20 points within the day. 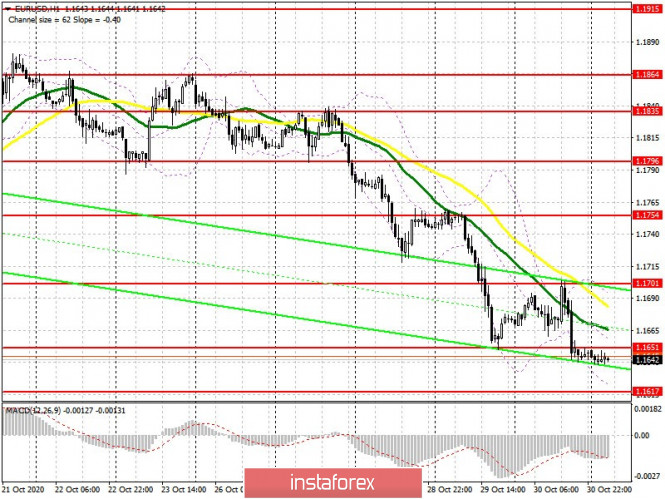 Trading is carried out below 30 and 50 moving averages, which indicates the continued pressure on the pair.

A breakout of the lower border of the indicator around 1.1617 will increase pressure on the euro. The breakout of the upper border in the 1.1701 area will lead to another attempt to strengthen the pair.

Interesting? Write a comment below.
 #EUR/USD: plan for the European session on November 2. COT reports. Euro buyers under pressure. Bulls have nothing to catch
Forward 
Backward 