Selling the euro below 1.1797 yesterday, which I mentioned in my afternoon forecast, did not bring much profit, although there were all preconditions for a succeeding decline. If you look at the 5-minute chart and remember yesterday's forecast, you will see that after a failed attempt to fall below the 1.1797 level, the bulls managed to reclaim this range. Settling on it and testing it from top to bottom formed a signal to buy the euro (I marked the area on the chart), but the upward movement was also not unidirectional, which made it possible to take no more than 20 profit points from the market. 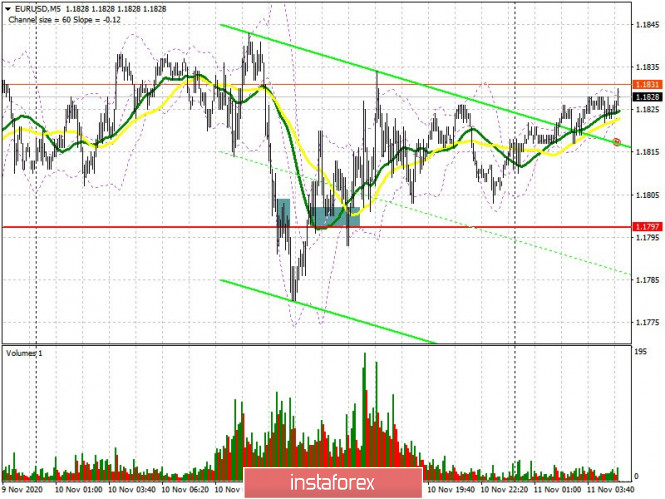 From a technical point of view, nothing has changed for euro buyers. They will also focus on protecting support at 1.1797 in the morning, which was updated yesterday for the second time this week. Bulls will be able to protect the 1.1797 level considering that we do not have any fundamental data today, we only have European Central Bank Christine Lagarde's speech. Forming a false breakout at this level will be a signal to open long positions in hopes to bring back the bullish trend that we saw last week. An equally important goal is a breakout and being able to settle above the resistance of 1.1860, just below which there are moving averages playing on the side of the bears. Getting the pair to settle at this level forms a signal to open long positions in hopes to recover to a high of 1.1915 and its renewal in the 1.1964 area, where I recommend taking profits. If bulls are not active at the 1.1797 level, it is possible that the downward correction will continue. Therefore, in case the price falls below this level, I recommend opening new long positions after updating support at 1.1743, or for a rebound from the 1.1701 level, counting on a rebound of 15-20 points within the day.

Most likely, Lagarde will not talk about any important changes in monetary policy at the end of the year, so volatility is expected to be quite low today since the United States is celebrating Veterans Day. Markets will also be closed in some European cities, but for their own reasons. Sellers need to form a false breakout in the resistance area of 1.1860 today, which will be a signal to open short positions in hopes of completing the bull market and forming the downward correction. The first target in this scenario will be the low of 1.1797, which could not be broken through yesterday, even against the background of weak eurozone fundamental reports. However, it is possible to sell below this range, but only when the price has settled and this area has been tested from the bottom up (similar to yesterday's sale, which I analyzed above). In this case, the downward wave will reach a larger low at 1.1743, and the bears' farthest target in the middle of the week will be support at 1.1701, where I recommend taking profits. If bears are not active in the 1.1860 resistance area, it is best to postpone short positions until yesterday's high at 1.1915 has been tested, or sell EUR /USD immediately on a rebound from the 1.1964 resistance counting on a 15-20 point correction within the day. 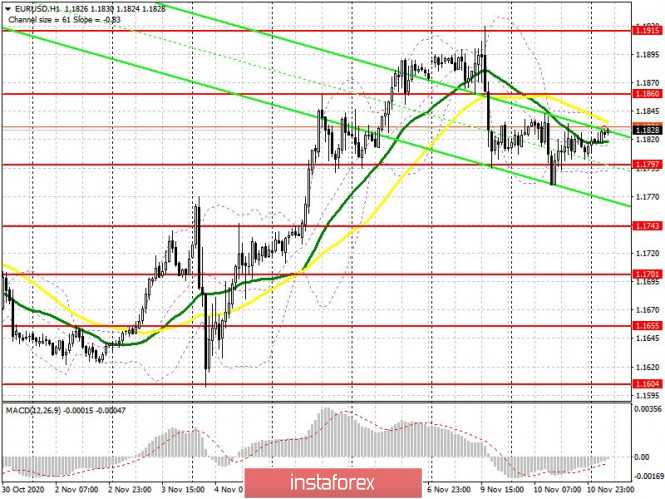 Trading is carried out just below the 30 and 50 moving averages, which indicates the likelihood of further downward correction of the euro.

A breakout of the upper border of the indicator around 1.1834 will lead to a new wave of euro growth. A break of the lower border at 1.1797 will increase pressure on the euro.