Selling the euro below the 1.1797 level, which I mentioned in yesterday's morning forecast, brought a good result, since the bears managed to get to the next target level of 1.1743 in the US session. If you look at the 5-minute chart and remember yesterday's forecast, you will see that a good signal to sell the euro appeared after forming a breakout and getting the pair to settle below the 1.1797 level, followed by its test from the bottom up, which then pulled down the pair to a low of 1.1743. By the way, I advised you to open long positions immediately on a rebound from this level in the afternoon, which also made it possible to take additional 20-30 points of profit from the market. 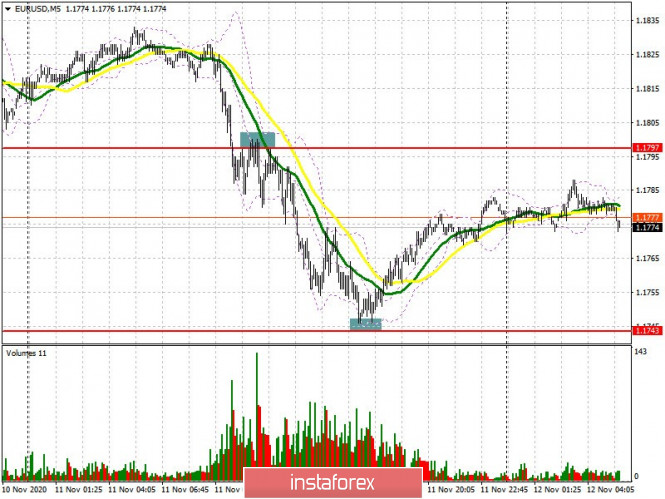 Buyers of the euro will most likely focus on protecting support at 1.1743 in the morning, which they defended in yesterday's US session. However, I recommend opening long positions from it only when a false breakout is formed there and also when yesterday's low has been updated, which will be confirmed by the divergence on the MACD indicator that is gradually emerging. In case bulls are not active amid weak data, and today we have quite interesting reports on German inflation and the volume of industrial production in the eurozone, I recommend completely postponing long positions until the low of 1.1701 has been tested, where you can buy the euro immediately on a rebound. An equally important task for the bulls is to return the 1.1797 level, the area which is where the moving averages are now playing on the side of sellers. Going beyond and testing this level from top to bottom produces a convenient entry point to long positions with the goal of restoring the euro's growth, which will lead to resistance at 1.1860. The next goal will be a high of 1.1915, where I recommend taking profits.

The sellers' initial task is to protect resistance at 1.1797, which they managed to win back yesterday afternoon and from which they built a rather large downward trend. As long as trading is carried out below this range, we can expect the downward trend to continue. An unsuccessful attempt to rise above 1.1797 after we receive data on the eurozone economy also forms an additional signal to open short positions in EUR/USD. In this case, the nearest target will be a low of 1.1743. Going beyond this area will increase pressure on the pair and quickly pull it down to a low of 1.1701, where I recommend taking profits. If the bulls turn out to be stronger and they manage to bring back the 1.1797 area in the first half of the day, then it is best not to rush to sell, but to postpone new short positions until the resistance of 1.1860 has been renewed. I also recommend selling EUR/USD immediately on a rebound from a high of 1.1915, counting on a correction of 15-20 points within the day. 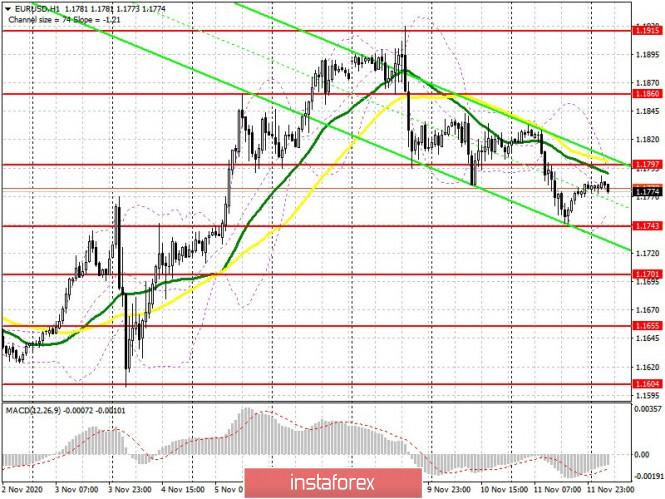 Trading is carried out below 30 and 50 moving averages, which indicates the likelihood of further downward correction of the euro.

A breakout of the upper border of the indicator around 1.1797 will lead to a new wave of euro growth. A break of the lower border at 1.1755 will increase pressure on the euro.