It seems that everyone is stuck at the 1.1797 level, which is where we have been all week. Taking one or the other, there is no effective direction for any of the parties. A signal to buy the euro appeared after being able to settle above the 1.1797 level yesterday afternoon, but it was "on the thin side", so those who were outside the market did not lose anything. If you look at the 5-minute chart, you will see that the bulls failed to keep the pair higher after initially returning to the 1.1797 level. An increase in long positions could be observed forming a false breakout in this range, but it had low profitability. 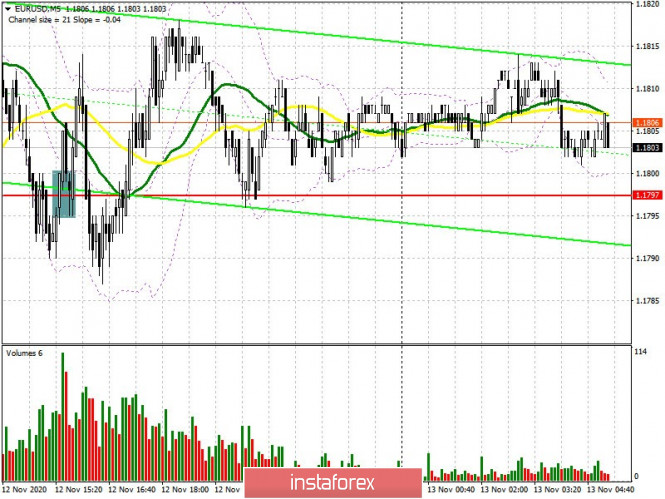 Nothing has changed from a technical point of view. Focus for the first half of the day will shift to important data on the European economy, since it may return the pressure on the euro. If buyers of the euro still manage to protect support at 1.1797, then forming the next false breakout there will be a good entry point into long positions, in hopes of moving to the resistance area of 1.1860, where I recommend taking profit. The next goal is the weekly high at 1.1915. If bulls are not that active, and the data turns out to be much worse than economists' forecasts, then it is possible for EUR/USD to return to the area below 1.1797. In this case, buyers will focus on protecting support at 1.1743 for the first half of the day. However, it is possible to open long positions from it on its initial test, counting on a correction of 15-20 points within the day. A larger reversal in favor of buyers will occur if they manage to form a false breakout at 1.1743.

Sellers should return the 1.1797 level to themselves, which they missed yesterday morning and they also failed to do so after the release of weak fundamental statistics on US inflation. Getting the pair to settle below 1.1797 and testing it from the bottom up forms a more convenient entry point in order to sustain the downward trend. In this case, the nearest target of the bears will be the low of 1.1743. Testing this level will indicate the emergence of a new bear market for EUR/USD. However, only a breakout of this area can increase the pressure on the pair and will quickly pull it down to the 1.1701 low, where I recommend taking profits. If the bulls turn out to be stronger and continue to push the pair up after the release of data on the eurozone GDP and the unemployment rate, then it is best not to rush to sell, but instead you should wait until a larger resistance at 1.1860 has been updated. I recommend selling EUR/USD immediately on a rebound from a high of 1.1915 counting on a correction of 15-20 points within the day. 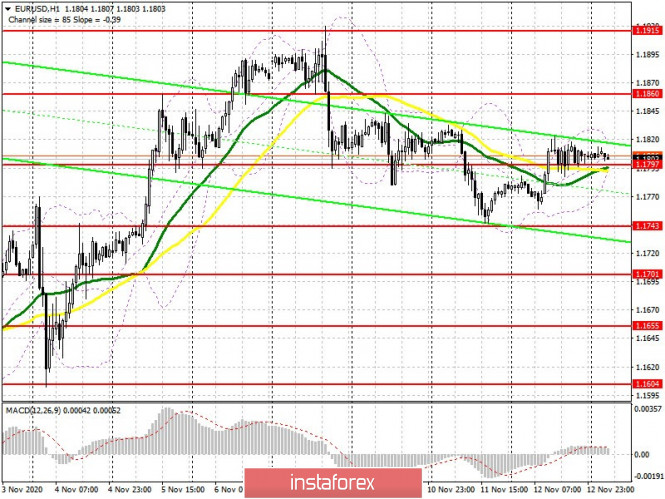 Trading is carried out just above 30 and 50 moving averages, which indicates the likelihood of the euro's succeeding growth.

Volatility has decreased, which does not provide signals to enter the market based on this indicator.