I mentioned placing buy positions above 1.1814 and selling from a large high yesterday afternoon, which is what happened. Let's take a look at the 5-minute chart and break down the entry points. After the pair began to slowly exert pressure on the 1.1814 level in the afternoon, its breakdown took place, which caused EUR/USD to rise by 60 points. We had the same signal in the morning after the breakout of 1.1765. Short positions immediately on the rebound from the resistance of 1.1864 were also absolutely correct. But the pair was just a couple of points short of reaching this high, so I personally missed this deal.

Buyers are currently focused on going beyond the 1.1842 high and there are plenty of reasons for that today. The intrigue of winning the US presidential election remains, but Biden has an advantage, so a breakout and getting the pair to settle above 1.1842 is a signal to open long positions in hopes of reaching highs of 1.1878 and 1.1915, where I recommend taking profits. The US labor market report will be released in the afternoon, which could return the demand for the US dollar. Therefore, in case the pair falls, a false breakout in the support area of 1.1797, where the moving averages pass playing on the side of buyers, will be a signal to open long positions. I advise you to buy EUR/USD immediately on a rebound only from a low of 1.1757, counting on a rebound of 15-20 points within a day.

Sellers need to protect resistance at 1.1842, as well as the larger level of 1.1878, when tested, a divergence may form on the MACD indicator, which will lead to forming a downward correction for the pair. Forming a false breakout at 1.1842 will also be a signal to open short positions. A more important task for euro sellers is to go beyond and settle below support at 1.1797. Testing it from the other side forms a fairly good sell signal in hopes to fall to a low of 1.1757. Support at 1.1701 will be the next goal, which is where I recommend taking profit. Many important fundamental reports will be released today, including the data that everyone is waiting for - the results of the US elections, so volatility promises to be very large. So don't forget to place stop orders. 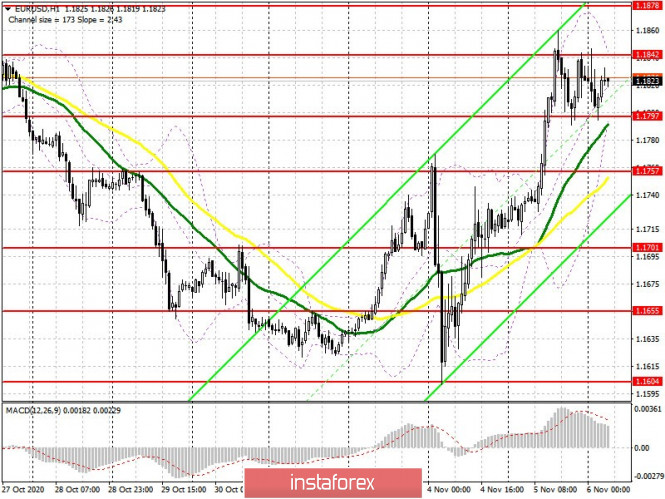 Trading is carried out above 30 and 50 moving averages, which indicates continued growth in the euro.