EUR/USD: plan for the European session on November 4. COT reports. Trump is not as simple as everyone thought. US dollar

In yesterday's afternoon forecast, I drew attention to buying the euro in the support area of 1.1701, the breakdown of which took place in the middle of the day. If you look at the 5-minute chart, you will see how buyers confirmed their presence with several more false breakouts, afterwards the euro went up further, just barely reaching the resistance of 1.1754. However, the bullish momentum did not continue and after the first results of voting in different states appeared, it became clear that Biden's victory would not be so easy, if at all. According to the results of the first polls, 14 states voted for Donald Trump, against 12, which prefer to see Joe Biden as the new president. Accordingly, the market reaction was not long in coming and the US dollar regained all its positions, renewing its monthly lows against the euro. 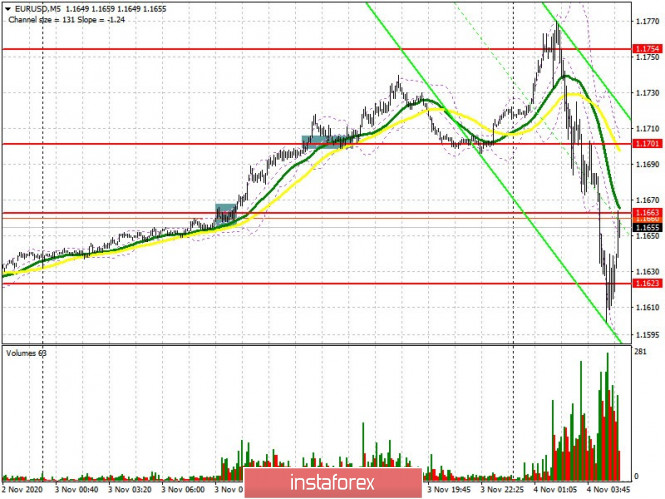 At the moment, it is better not to rush to enter the market at such volatility, since we are not certain whether we can reach such large levels today, since no one knows which direction the market will prefer. One thing is clear, the bulls need to settle above the resistance of 1.1663, which will push the pair up to the high of 1.1701. However, I recommend building up long positions after settling above this range with the goal of reaching the 1.1765 level, from which the entire fall began today. In case the pair falls, forming a false breakout in the support area of 1.1604 will keep buyers optimistic. The absence of bulls' activity in that area will pull down the pair to a low of 1.1541, where we can watch the downward movement stop and an upward correction of 15-20 points. I recommend buying EUR/USD immediately on a rebound only from the low of 1.1490.

Sellers have one simple task - to keep the resistance at 1.1663, where forming a false breakout will be a signal to open short positions in the euro. Slightly higher is the no less important level of 1.1701, which I also recommend paying attention to, as its breakout will lead to a powerful bullish momentum. The bears' main goal in the first half of the day will be to form a breakout and get the pair to settle below the support of 1.1604, which will raise the pressure on the euro and lead to a large sale of EUR/USD to the area of the lows of 1.1541 and 1.1490. You can count on such a scenario after the release of a number of fundamental statistics on activity in the service sector of the eurozone countries, which will probably slow down due to the spread of the coronavirus pandemic. In case EUR/USD grows above the resistance of 1.1701, there is no need to rush to sell. It is best to postpone short positions until the 1.1765 highs are renewed in hopes of a 15-20 point correction, or to sell the euro for a rebound from the new local highs of 1.1835 and 1.1915. 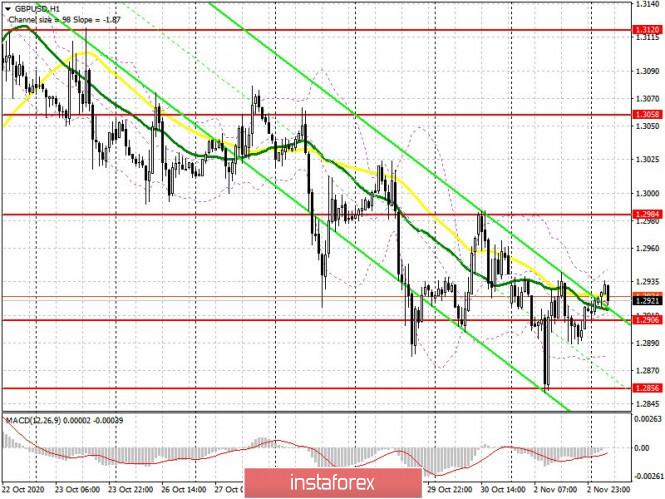 Trading is carried out just below the 30 and 50 moving averages, which indicates an active opposition of buyers and sellers.

In case of growth, the upper border of the indicator at 1.1765 will act as resistance.

Interesting? Write a comment below.
 #EUR/USD: plan for the European session on November 4. COT reports. Trump is not as simple as everyone thought. US dollar
Forward 
Backward 