EUR/USD: plan for the European session on November 9. COT reports. Joe Biden is America's new president, dollar is in no

Last Friday, the euro continued to strengthen its position against the US dollar after the vote tally, according to which Joe Biden won the presidential race. However, such news did not cause EUR/USD to rise in today's Asian session and so the pair continued to trade in the area of the 19th figure, which clearly indicates traders' fears about the euro's strength.

This is also confirmed by the weekly report from the futures market, in which a sharp reduction in long positions in the euro is noticeable. Political intrigue in the US is not the euro's core problem. The recently introduced partial lockdown in many European countries, including Germany and France, is quite another matter. The future prospects for the recovery of the European economy due to the second wave of Covid-19 are severely darkened, and no one knows how much the service sector will sink, which forces traders, if not to sell the euro, then clearly choose a wait-and-see attitude, especially after the end of the presidential elections in the United States. The Commitment of Traders (COT) report for November 3 recorded a reduction in long positions and an increase in short positions. Despite this, buyers of risky assets believe in the continuation of the bull market, although they prefer to proceed with caution. Thus, long non-commercial positions fell from 217,443 to 208,237, while short non-commercial positions rose from 61,888 to 67,888. The total non-commercial net position fell to 140,349, from 155,555 a week earlier. However, the bullish sentiment on the euro remains rather high in the medium term, especially after the victory of Joe Biden, who intends to endow the US economy with the next largest monetary aid package worth more than $2 trillion.

Buyers of the euro will be focused on defending the 1.1854 support, which may decline after a gradual deterioration in tensions over the US election results. Forming a false breakout at this level, where the moving averages also pass, will be a signal to open long positions in continuing the bullish trend that we have observed since the middle of last week. An equally important goal for the bulls is a breakout and being able to settle above the resistance at 1.1915, from which a direct road to the highs of 1.1915 and 1.1964 will open. Taking into account that we have no important fundamental data at the beginning of the week, the 1.1854 level will be of great importance. A downward correction is possible if the bulls are not active on it. Therefore, I recommend opening new long positions only after we have updated support at 1.1797, or the 1.1757 level, counting on a rebound of 15-20 points within the day. 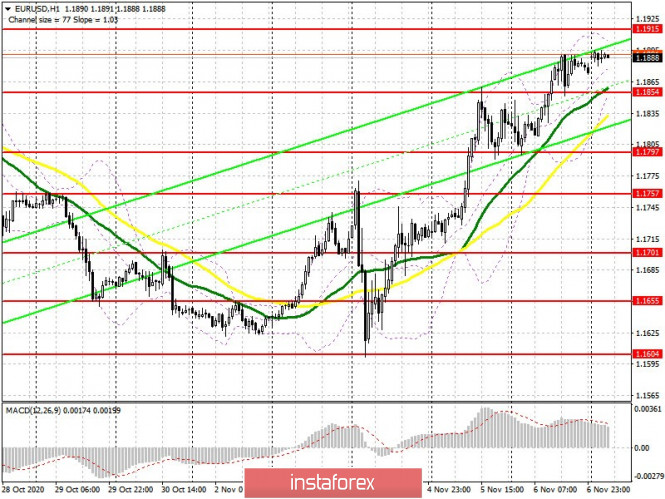 Sellers need a false breakout to form in the resistance area of 1.1915, which will be a signal to open short positions in hopes of ending the bull market and producing a small downward correction. The first target will be a low of 1.1854, but you can only sell below this range when the pair has settled and this area has been tested from the bottom up. In this case, the downward wave will move to a larger low of 1.1797, where I recommend taking profits. The next target will be support at 1.1757. If bears are not active in the resistance area at 1.1915, it is best to postpone selling until the test of a new high at 1.1964, or open short positions immediately on a rebound from the resistance of 1.2008, counting on a correction of 15-20 points within the day.

Trading is carried out above 30 and 50 moving averages, which indicates the continued bull market.

Interesting? Write a comment below.
 #EUR/USD: plan for the European session on November 9. COT reports. Joe Biden is America's new president, dollar is in no
Forward 
Backward 