Fluctuating movements: traders focus their attention to the US elections

The currency market has entered a turmoil zone. The dollar pairs are associated with events in the United States, where votes are currently being counted. During today's Asian session, the situation changed literally every hour – Joe Biden took the lead at first, then Donald Trump began to actively catch up with him. Therefore, the dollar pairs reacted correspondingly. For example, the AUD/USD pair managed to update the three-week high (0.7220) over the past few hours, and then collapse by almost a hundred points to the level of 0.7045. But when Mr. Biden tried to bypass his opponent Mr. Trump again, the Australian dollar pulled back from the lows and settled at the base of the 71st figure. Such movements are solely due to one fundamental factor – all traders' attention is focused on the counting of votes of American voters. 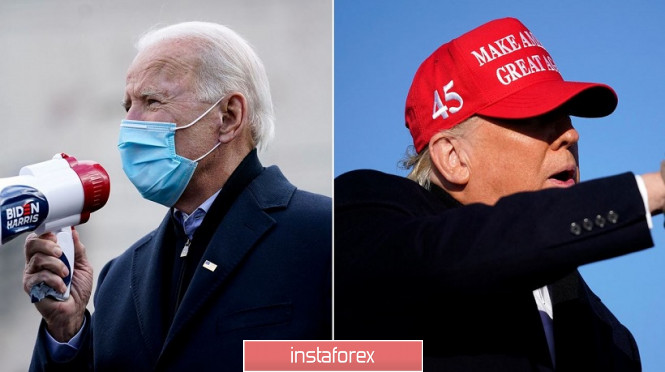 By 9:00 GMT, Joe Biden is still leading in the number of electors, but Trump is winning the key states. In almost all states where there are no results yet, polls show Trump is in the lead, with a slight margin, that is, only by 1-2%. So far, both candidates have every chance of winning. The Republican defeats the Democrat in all six so-called "swing" states, where it is not known until recently which party and candidate will win the election.

First of all, it should be noted that Trump won in Florida, receiving 29 electoral votes and in Georgia (16 votes), where 76% of the ballots were counted. As we can see, the current president is winning confidently in both states. In Iowa (where 6 votes are at stake), 90% of the ballots have already been counted and Trump's advantage over Biden is 6%. In North Carolina (15 votes), after counting nearly all ballots, Trump leads by 2%. So far, data are available only for 35 US states and the District of Columbia.

At the moment, Biden has 224 electors, while Trump has 212 electors. In order to win, votes of 270 electors are needed. It is worth noting that all the "recorded" victories of candidates in the above states correspond to pre-election forecasts. The key to these elections are the results in Florida, where Trump has a good chance of winning, North Carolina, Michigan, Ohio, Pennsylvania and Wisconsin.

In other words, we have a vague situation. Therefore, high volatility in the currency market (especially for dollar pairs) will persist. It should also be noted that in addition to the presidential elections, the by-elections to Congress also took place yesterday. According to the American press, the Democratic Party will retain a majority in the House of Representatives. But the main result, which is from the US Senate, has not yet been drawn. The outcome of the battle for a majority in the Upper House of Congress, where Republicans controlled 53 of the 100 seats, is still unclear. It is worth recalling here that if the Democrats win both the Senate and the House of Representatives, they will be able to lobby their bills more effectively later (including a new package of incentives), threatening the White House (if Trump is re-elected) to block Republican legislative initiatives.

Due to a lot of uncertainty, it is still risky to trade dollar pairs at the moment. Trump and Biden are going head-to-head, and there is currently no clear favorite in the presidential race. This suggests that the movement can swing in one direction or another for the next few hours. At the same time, the reaction of the head of the White House can be quite aggressive in case of a loss. In connection to this, Trump has already posted on Twitter a quite ambiguous message: "We did a great job, but they are trying to steal the election. We will never let them do it." All this suggests that the electoral process can be continued in the courts. 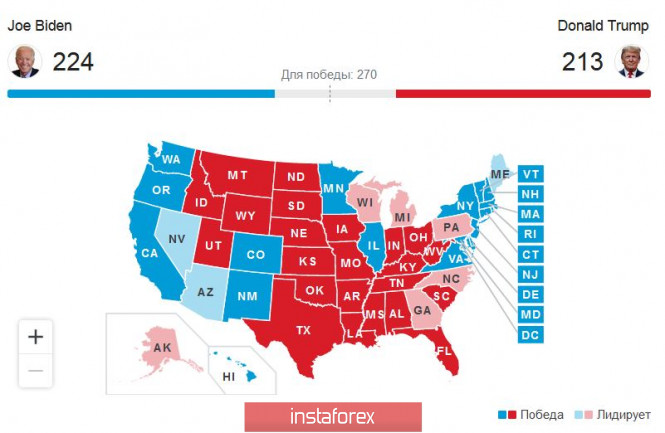 In terms of news background, particularly, the US election, it can be noted that the Australian dollar received unexpected support from China yesterday, no matter how strange it may sound. As a result, Beijing ordered them yesterday to stop buying at least seven product categories from Australia, including coal, copper, lumber, barley, sugar, wine and lobster. On the one hand, this is negative news for the AUD, since it indicates the ongoing conflict between both countries. But on the other hand, the Chinese still do not touch iron ore – the largest item of Chinese imports from Australia. A strategically important raw material product was not restricted.

However, this fundamental factor had a certain strength for the AUD/USD pair yesterday, and may resume its action in the future. But today, all dollar pairs are only tied to events in the United States. In my opinion, the general situation with the US elections will be clear by the beginning of the US session on Wednesday, after which the main market reaction will follow. For now, it is not suggested to open any trading positions, including the AUD/USD pair.

Interesting? Write a comment below.
 #Fluctuating movements: traders focus their attention to the US elections
Forward 
Backward 