Last Friday the euro settled below the balance indicator line on the daily timeframe. The MACD indicator line turned down, while the Marlin oscillator settled in the downward trend zone. The situation is completely downward in the medium term. The closest target is the 1.1590 level, then 1.1495. 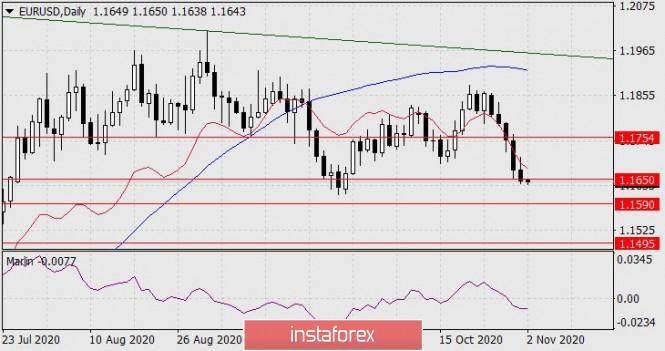 A weak convergence formed according to Marlin on the four-hour chart, this gives a precondition for the price to settle before the presidential elections in the United States. The price will likely settle in a narrow range below the 1.1650 level. 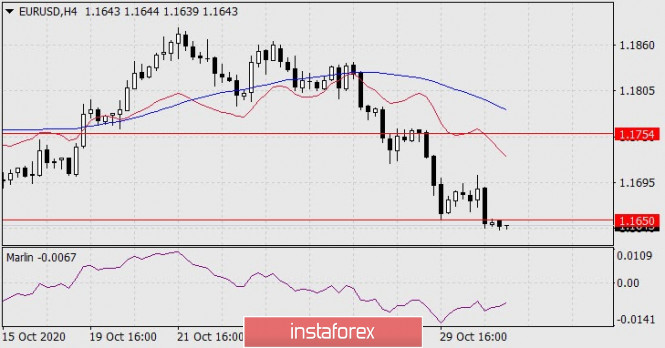 As for the price's behavior after Biden's victory, the dollar will most likely strengthen, since we see no reason for the opposite due to the victory of the Democrats. In the current economic cycle and with geopolitical events, a strong dollar is beneficial to the United States, regardless of the party that came to power. Moreover, the euro's growth back in July-August was speculative, since no financial institution in the United States, be it a bank or an investment company, gave an intelligible answer to this growth. The Commitment of Traders (COT) data shows the largest volume of accumulated long positions in the euro over the past nine months, it's time to send the bulls to the slaughterhouses. We expect the euro to start falling from 1.1165-1.1200 within 2-3 weeks.