The final results of the US presidential election have not yet been determined. But Joe Biden needs to confirm his advantage in two states in order to win, while Donald Trump needs to confirm an advantage in four. Artificial difficulties that Trump created in regards to the counting of votes, the demand for US government bonds and the lack of only one place for the Republicans in the Senate to obtain a majority made it possible for the euro to rise by 100 points. The Federal Reserve meeting was a passing one yesterday, it had no effect on the market. 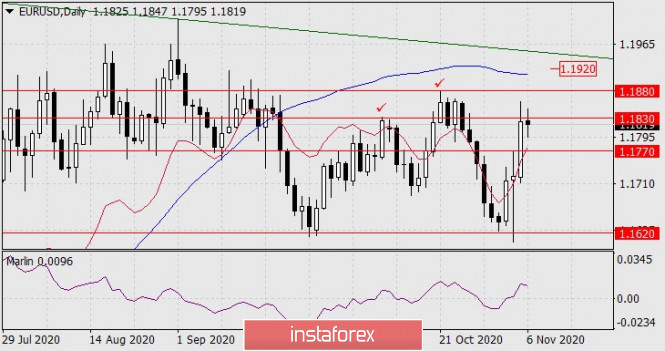 The price has powerfully reached the target level of 1.1830 and has settled below it on the daily chart. The signal line of the Marlin oscillator began to show a reversal, there is a chance that the price will fall below the target level of 1.1770, settle below it, and this will then confirm the reversal. In this case, the 1.1620 level will be the target, that is, the initial position before the market starts working out the American elections. The level is very strong and ideologically significant, so the price moving below it will be a sign of starting a medium-term downward trend. But this is still far away (two figures), and in the current situation, the 1.1770-1.1830 range is an area of uncertainty. Getting the price to settle above it will mean it could also rise to 1.1880 or even higher, to the MACD line (1.1920). 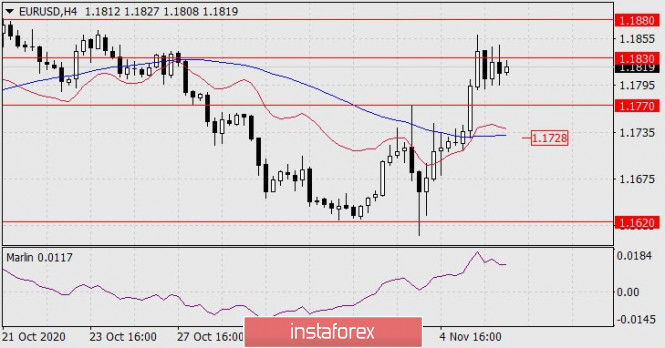