US data on employment came out good: 638,000 new jobs were created in the non-agricultural sector against the forecast of 600,000, the share of the economically active population increased from 61.4% to 61.7%, the unemployment rate fell from 7.9 % to 6.9%, dropping to the level of September 2014. Unemployment fell by 53% in six months, which, of course, is a good pace. But the dollar dropped 0.27% on Friday, while the euro rose by 50 points. The business media have portrayed this growth, as well as all of the euro's growth since election day, with an increase in risk appetite and anticipation of a massive stimulus package. But we don't think so. This is far from the same interest in risk that was seen in 2013 or 2017, for example, with big businesses setting the euro exchange rate at 1.32 and 1.15 in each period. We do not know what track the business is interested in, but it is unlikely to be 1.18. We even doubt that corporations need a second aid package. To understand the current situation, you need to dig deeper.

Each so-called aid package is spent by corporations in two main areas: for speculation in stock markets and for takeover of large companies in other countries. US President Donald Trump, according to the Democrats, made the main mistake in his policy - by freezing projects of transoceanic partnerships, he went deep, in particular, in sanctions against individual countries. With the arrival of Biden, one can expect a resumption of American-style globalization (Pacific partnerships), a US-UK trade deal regardless of the outcome of Brexit, and continued expansion of British-American companies to third countries. All these tasks require a strong dollar, not an ephemeral interest in risk, which is used as a cover for banal speculation for the time being. 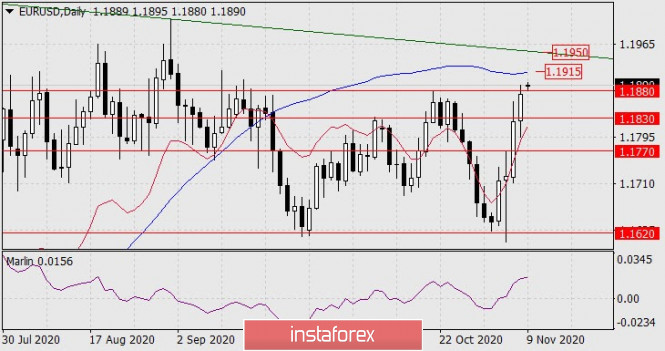 The euro has currently overcome the target level of 1.1880, it is possible to reach the MACD line at 1.1915 (daily). Overcoming the MACD line will allow the price to reach the resistance of the upper line of the price channel at around 1.1950. Getting the price to settle below 1.1880 could bring prices back below 1.1830. The bears could aim for 1.1770. No clear direction for today, volatility could also be low. 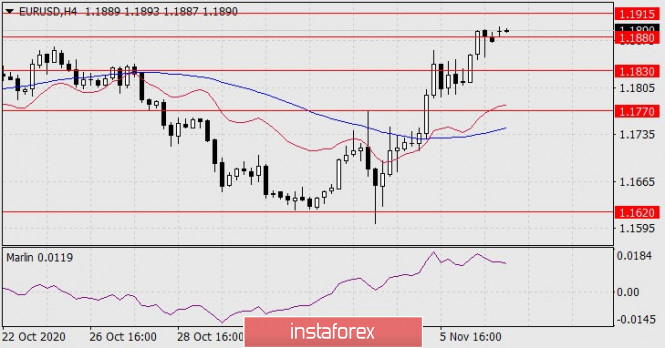 Growth occurs when the Marlin oscillator turns down on the four-hour chart. The situation is also undefined. The euro could move in both directions and is associated with an increased risk for trading. Getting the price to settle below the MACD line, under 1.1735, can confirm the downward direction. Speculation in both directions may continue in the coming days.