GBP/USD: plan for the European session on November 2. COT reports. Bulls' attempts to regain control of the market remain

The bears tried to continue the downward trend last Friday, taking support at 1.2918 in the first half of the day. The 5-minute chart shows that this level was tested from the bottom up, which led to producing a point of entry into short positions, however, it did not result in a major drop, and the market reversed. However, it was possible and necessary to sell on a rebound from the resistance of 1.2991 in the afternoon, which I mentioned in my morning forecast, which brought more than 50 points of profit.

Changes are noticeable in the futures market, which play on the side of the sellers of the pound. But not that there are more people willing to sell the pound. Rather, the number of those who want to buy it have not increased. The fact that traders are closing both short and long positions indicates a wait-and-see attitude due to the next quarantine of the UK economy. Lack of clarity on the trade deal also does not add optimism and confidence to the buyers of the pound. The risk of introducing negative interest rates at the next meeting of the Bank of England in November also puts pressure on the British pound. The Commitment of Traders (COT) reports for October 27 showed a reduction in both short and long positions. Long non-commercial positions fell from 39,836 to 31,799. At the same time, short non-commercial positions fell from 41,836 to 38,459. As a result, the negative non-commercial net position was at -6 660, against -2000 a week earlier, which indicates that the sellers of the British pound retained control and also shows their minimal advantage in the current situation. 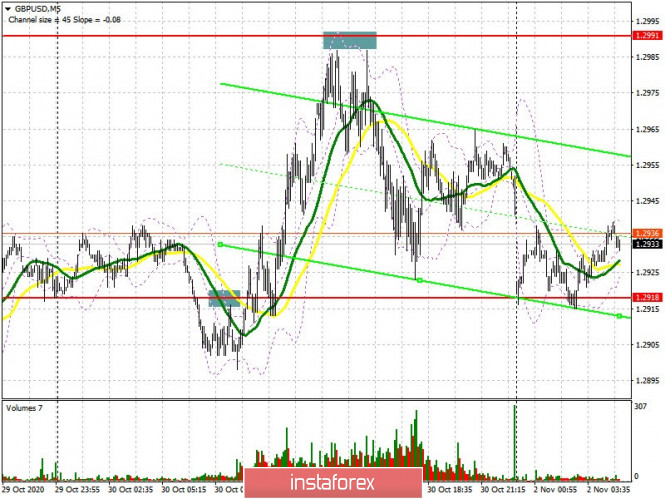 Buyers of the pound need to protect support at 1.2915 as soon as possible, since the pair's long term movement will depend on this. Forming a false breakout at this level in the first half of the day, together with good data on manufacturing activity in the UK, will lead to a wave of growth for the pound and a return to Friday's high of 1.2984. Getting the pair to settle above this range and having it tested from top to bottom forms a good signal to open long positions with the goal of rising to a high of 1.3058, where I recommend taking profits. In case buyers are not active around 1.2915, it is best not to rush into buy positions, as the data may disappoint traders. In this case, forming a false breakout in the support area of 1.2865 will be a signal to open long positions against the trend. I recommend buying the pound immediately on a rebound from the low of 1.2807, counting on a correction of 15-20 points within the day.

Sellers need to regain the 1.2915 level, being able to settle below it will increase the pressure on the pair and could bring back the bear market, which temporarily paused last Friday. Testing the 1.2915 level from the bottom up, similar to Friday's entry point, will be a signal to open short positions in hopes to update the low of 1.2865, a breakdown of which may pose as a problem for the first time. Getting the pair to settle below this range will increase the pressure on the pound and lead to a larger sell-off to the 1.2807 low, where I recommend taking profits. In case GBP/USD grows in the first half of the day after the release of the production activity data, it is best to wait until the 1.2984 high has been tested, and forming a false breakout there will be a signal to open short positions. Selling the pound immediately on a rebound is possible from the resistance of 1.3058, counting on a correction of 20-30 points within the day. 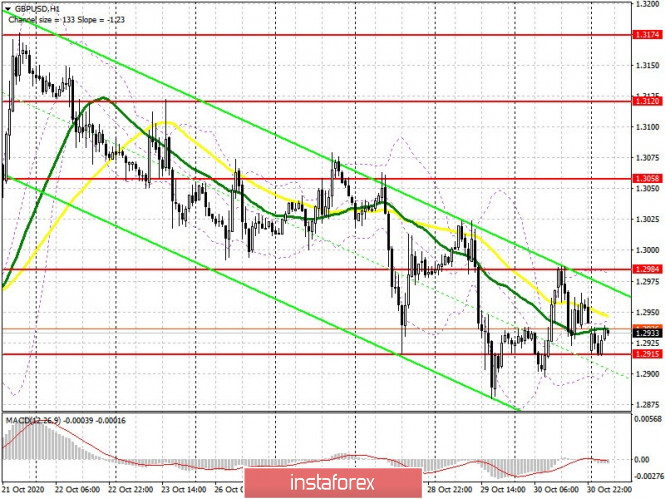 Trading is carried out just below 30 and 50 moving averages, which indicates a slight advantage for sellers of the pound.