Contrary to all common sense, the British pound continues to grow against the US dollar, stamping entry signals to the market one by one. Let's take a look at the 5-minute chart and break down yesterday's trades. Everything is clear in the morning. Bulls break out and settle above resistance at 1.3205, where I recommended opening long positions. As a result, the pound gained more than 50 points and reached the 1.3261 target. I recommended selling the pound from the 1.3261 level immediately on a rebound with a correction of 20-30 points. In the end, this is what happened. After testing 1.3161, the pound rebounded by around 33 points.The bulls tried to go above 1.3261, but the bears managed to form a false breakout and pushed the pair to the 1.3205 area (the entry point after the false breakout is marked on the chart). 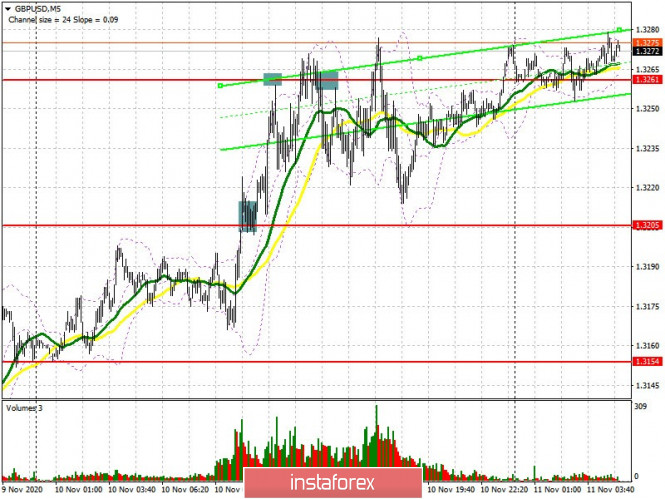 But as we can see now, buyers of the pound do not intend to give up, and they have already taken resistance at 1.3261 in the Asian session, without encountering much opposition from the bears. Entry points to long positions are very difficult right now. One thing is clear, as long as trading continues above 1.3261, you can open long positions while expecting GBP/USD to strengthen to a high of 1.3315. Resistance at 1.3378 will be the next target, which is where I recommend taking profits. If bears try to regain control over the 1.3261 level and it fails while pound buyers form a false breakout there in the first half of the day, this will be an additional signal to open long positions. If bulls are not active when GBP/USD falls to support at 1.3261, then it is best not to rush into buying, but to wait until a larger area at around 1.3205 has been updated. I recommend opening long positions immediately on a rebound from a low of 1.3154, counting on a correction of 20-30 points within the day.

Sellers need to get back to the 1.3261 level, which they missed today in the Asian session. Testing this area from the bottom up will be the first signal to open short positions in anticipation of a downward correction to the support area of 1.3205, where I recommend taking profits. Moving averages, playing on the buyer's side, are just below this level. An equally important task for sellers is to break and settle below support at 1.3205, which will quickly pull down GBP/USD to a low of 1.3154, where I recommend taking profits. Since we do not have any important fundamental statistics on the British economy today, there is a chance that the pair could grow. Lack of bears' activity in the resistance area of 1.3261 will result in strengthening GBP/USD. Therefore, while trading is above 1.3261, I recommend postponing short positions until the 1.3315 high is renewed. Selling the pound right away on a rebound is best done from a larger resistance of 1.3378, counting on a correction of 20-30 points. 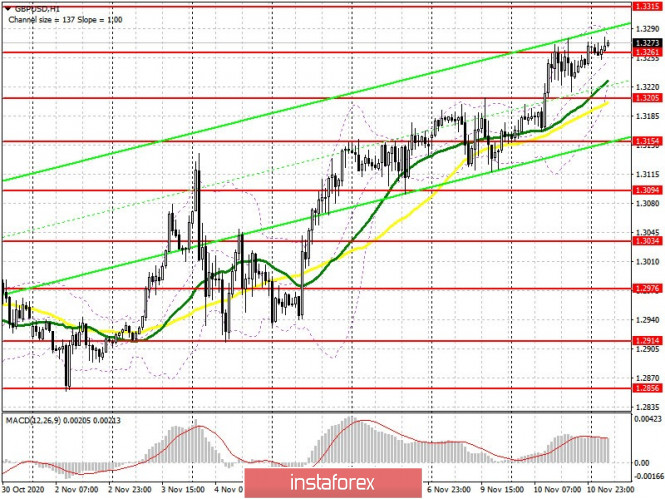 Trading is carried out above 30 and 50 moving averages, which indicates further growth along the trend.

A breakout of the upper border in the 1.3270 area will lead to a new wave of growth for the pound. A break of the lower border of the indicator around 1.3215 will increase the pressure on the pound.