GBP/USD: plan for the European session on November 13. COT reports. Bears recall Brexit and the lockdown of the British economy

In yesterday's afternoon forecast, I drew attention to sell positions on the pound after the breakout and getting the pair to settle below the 1.3172 level. However, I advised you to do so only if an important condition was met, which it did. Let's take a look at the 5-minute chart and break down the entry point. We see how the breakout of 1.3172, which took place at the beginning of the US session, did not provide a convenient entry point to the market. I said that it is necessary to wait for the pair to return to the 1.3172 level and that it should be tested from the bottom up, which happened. After fulfilling this condition, a good signal to sell the pound appeared, which caused the pair to fall by more than 60 points. Unfortunately, we barely reached the target value of 1.3094. 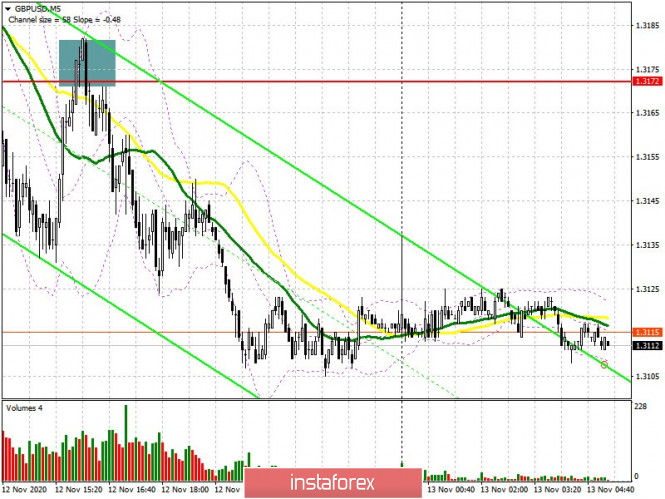 The bulls should protect support at 1.3094 for the first half of the day, which will be tested in the near future. Forming a false breakout there will stop the bearish momentum, which will boost buyers' confidence and return GBP/USD to the resistance area of 1.3172, which is where the entire fall occurred yesterday. Moving averages pass in the same range, so I recommend taking profit there. The high of 1.3248 should be the next goal, but this is more like a fantasy, since it is impossible to get there without good news on Brexit. In case bulls are not active in the 1.3094 area, it is best not to rest against the trend, but to postpone taking short positions until a new low at 1.3034 has been tested, which is where you can buy the pound immediately on a rebound in its first test, counting on a correction of 20-30 points within the day.

The bears coped with the task of protecting resistance at 1.3172, forming an excellent sell signal from it, which was fully realized. Apparently, testing the target level of 1.3094 is very close. How sellers behave at this level can determine the pair's succeeding direction. If buyers are not active at this level, getting the pair to settle below 1.3094 and testing it from the bottom up will produce a good signal to sell GBP/USD in hopes of renewing new lows around 1.3034 and 1.2976, where I recommend taking profits. Considering that there is no good news on Brexit, and it is unlikely that there will be any, one can bet that the pound will weaken further. In case GBP/USD grows in the first half of the day, I recommend not to rush to sell, but to wait until resistance at 1.3172 has been updated, where the moving averages also pass, playing on the side of sellers. Forming a false breakout at this level forms a good signal to sell the pound, in hopes to bring back the bear market. In case sellers are not active there, I recommend postponing short positions until the high of 1.3248 has been tested, where you can sell the pound immediately on a rebound, counting on a correction of 20-30 points within the day. 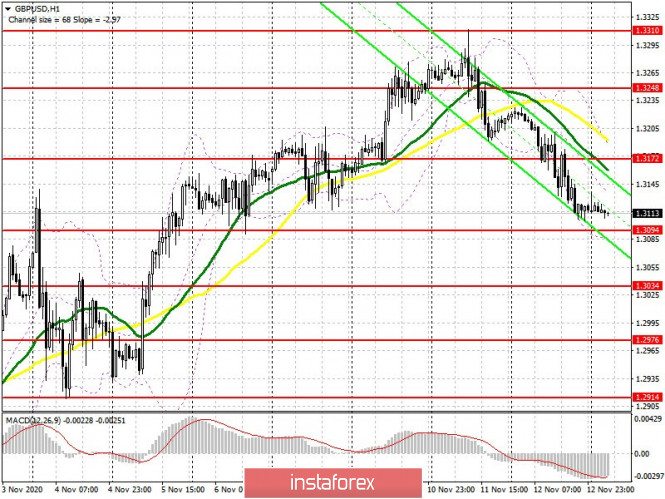 Trading is carried out below 30 and 50 moving averages, which indicates the likelihood of sustaining the downward correction.

Interesting? Write a comment below.
 #GBP/USD: plan for the European session on November 13. COT reports. Bears recall Brexit and the lockdown of the British economy
Forward 
Backward 