The British pound generated several signals to enter the market yesterday, which made it possible to earn. Let's take a look at the 5-minute chart and break down the entry points in more detail. Even in my afternoon forecast, I paid attention to the signal to buy the pound and advised you to open long positions from the 1.2984 level, especially if the entry point was confirmed by another false breakout, which happened. I marked the area on the chart where it was possible and necessary to enter long positions. The upward movement was more than 80 points. Short positions from resistance at 1.3058 during the first test did not bring much profit, although they also took place. 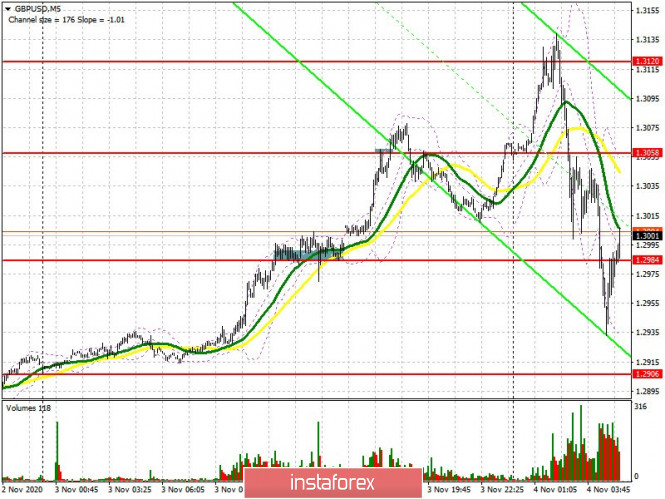 Taking into account the pressure under which the market is now, and what volatility is observed on it, there is clearly no need to rush into making a decision to enter it. Yesterday's bullish momentum stopped after the first results of voting in various states appeared, from which it became clear that Biden's victory would not be so easy, if at all. According to the results of the first polls, 14 states voted for Donald Trump, against 12, which prefer to see Joe Biden as the new president. Accordingly, the market reaction was not long in coming and the US dollar regained all its positions against the British pound.

Now buyers need to defend support at 1.2967, and forming a false breakout on it will be a signal to open long positions in the hopes of a return to resistance at 1.3043. Data on activity in the UK service sector could provide support, which should be better than the economists forecasts. An additional task for the bulls is to settle above resistance 1.3043 in the first half of the day, the test of which on the reverse side, similar to yesterday's entry point into long positions, forms a good buy signal, which can quickly return GBP/USD to the resistance area of 1.3136, where I recommend taking profit. In case the pound falls on the new results of the vote count in the US, it is best not to rush into buy positions. Perhaps the price will stop in the support area of 1.2914, but most likely the large bulls will prefer to return to the market only after the 1.2856 low has been updated, on which the further large upward movement of the pair depends. From it, you can open long positions with the expectation of a rebound of 30-40 points within the day.

Pound sellers are now aiming for support at 1.2967. A breakout and consolidation below this range will form a new entry point for short positions, which will cause the pound to fall to a low of 1.2914, which the pair failed to reach today during the Asian session. But as I noted above, sellers will focus on a large low at 1.2856, on which the current bull market depends. A breakout and getting the pair to settle below this range will lead to removing a number of buy stop orders, which will pull down the pound to the 1.2807 and 1.2749 areas, where a slight upward correction of the pair can be observed. In case bears are not active and the pair grows in the first half of the day, it is best to think about sell positions after forming a false breakout in the resistance area of 1.3043. It is possible to open short positions in GBP/USD immediately for a rebound only from a high of 1.3136, counting on a correction of 20-30 points within the day. However, much will depend on new state and voting data. 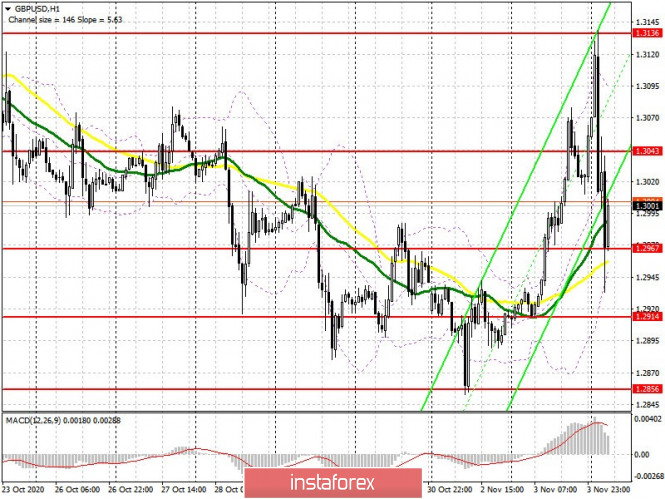 Trading is carried out in the area of 30 and 50 moving averages, which indicates an active opposition of buyers and sellers.