Last Friday, I paid attention to resistance at 1.3154 and recommended opening short positions from it if a false breakout was formed. Let's take a look at the 5-minute chart and break down the trades. Several unsuccessful attempts to go above the 1.1354 resistance and returning to the area below it led to forming good entry points to short positions, the main target of which was support at 1.3093. We managed to test it in the afternoon. I also recommended opening long positions from this level. As a result, the bulls managed to catch hold of the resistance at 1.3154 and while trading is carried out above this range, we can expect a new wave of growth in the pair.

There are changes in the futures market, which play on the side of sellers of the pound. However, most likely, the results of the struggle for the US presidency will make a number of amendments to this indicator. The fact that traders closed long positions and did not build up short ones indicated the fears that market participants had before the beginning of the US presidential election. However, the lack of clarity on the trade agreement, together with the lockdown of the British economy in November, clearly did not add optimism and confidence to buyers of the pound. Although the risk of introducing negative interest rates has subsided in the near future, do not forget about such a possibility at the end of this or early next year, especially if the situation with the coronavirus continues to deteriorate. 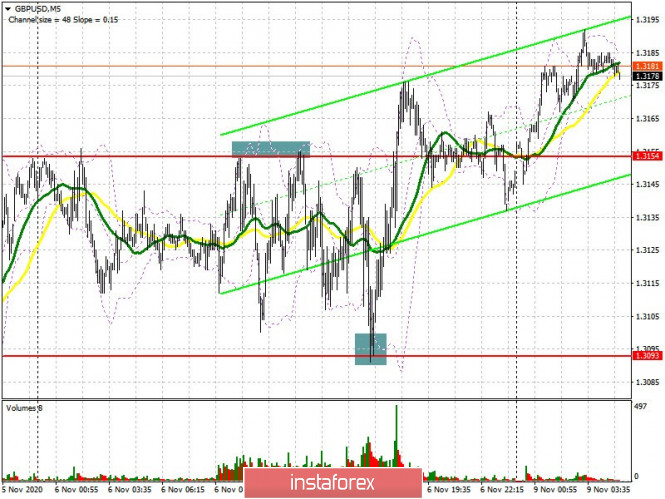 Buyers of the pound need to defend support at 1.3154, its succeeding growth will depend on this. Forming a false breakout at this level in the first half of the day, along with positive statements from Bank of England Governor Andrew Bailey, will lead to another wave of growth for the pound, as well as an update of a new high at 1.3234, a breakdown of which could cause problems. Getting the pair to settle above this range and testing it from top to bottom forms a good signal to open long positions in hopes to rise to the 1.3315 area, where I recommend taking profits. In case buyers are not active around 1.3154, it is best not to rush into long deals. In this case, falling to the support area of 1.3093 will be a signal to open long positions against the trend. I recommend buying the pound immediately on a rebound from a low of 1.3034, counting on a correction of 15-20 points within the day.

Sellers need to return to the 1.3154 level, being able to settle below it will increase the pressure on the pair and lead to bringing back the bear market. The initial goal is to test the 1.3093 level, however, it will only be possible to bring back the downward correction after intermediate support at 1.3034 has been updated. The 1.2967 level will be the sellers' key target at the beginning of the week, which is where I recommend taking profits. In case GBP/USD grows in the first half of the day against the background of Joe Biden's victory in the US presidential election, it is best to wait until the 1.3234 high has been tested, where a false breakout will be a signal to open short positions. I recommend selling the pound immediately on a rebound but only from the resistance of 1.3315, counting on a correction of 20-30 points within the day. 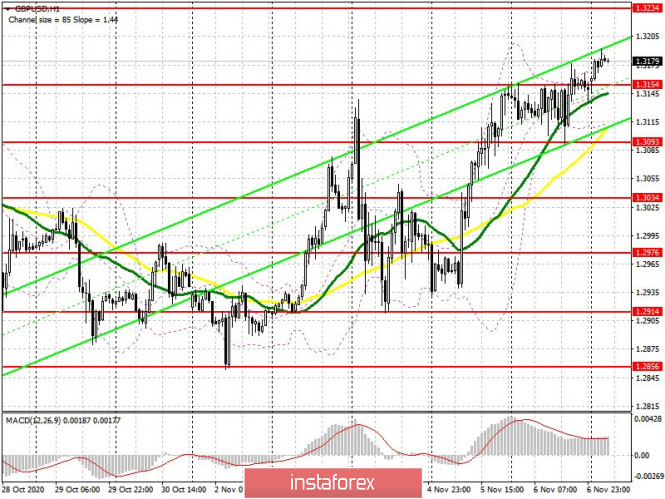 Trading is carried out just above the 30 and 50 moving averages, which indicates a slight advantage for buyers of the pound.

In case of a downward correction, the lower border of the indicator in the 1.3097 area will act as a support.