Hot forecast and trading signals for EUR/USD on November 4. COT report. Elections coming to an end, but results will not 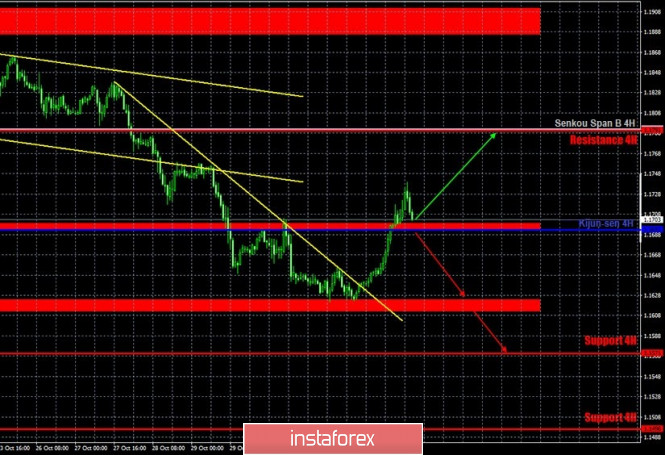 The EUR/USD pair traded quite volatile, but was also calm on the hourly timeframe on Tuesday, November 3. No sharp turns, changes in direction of movement and an outright storm with swings during the day. The pair ideally, from a technical point of view, reached the support area of 1.1612-1.1624 twice, rebounded off it and started a strong upward movement. The downward trend line was also broken, so there were plenty of signals to move up. Also, during its upward movement, the quotes of the pair crossed the critical Kijun-sen line, so the likelihood of a further growth in the pair increased even more. At the same time, the situation may change to a more turbulent one today, since the US elections will come to an end and the voting results will begin to be slowly summed up. 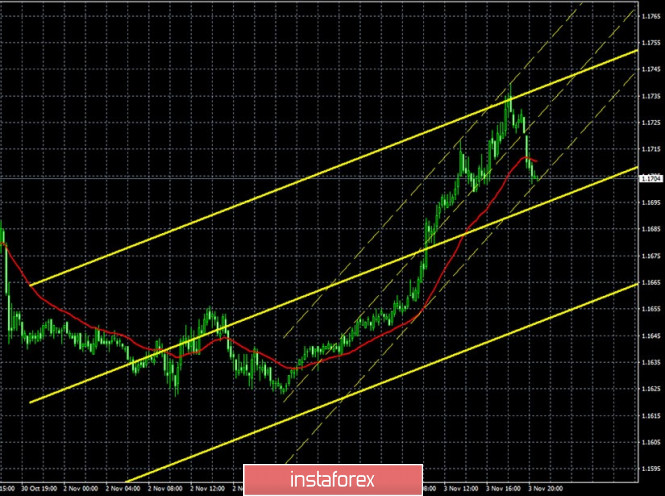 Both linear regression channels turned to the upside on the 15-minute timeframe, which accurately reflected the trend of the hourly chart, where an upward movement began after rebounding from the 1.1612-1.1624 area. 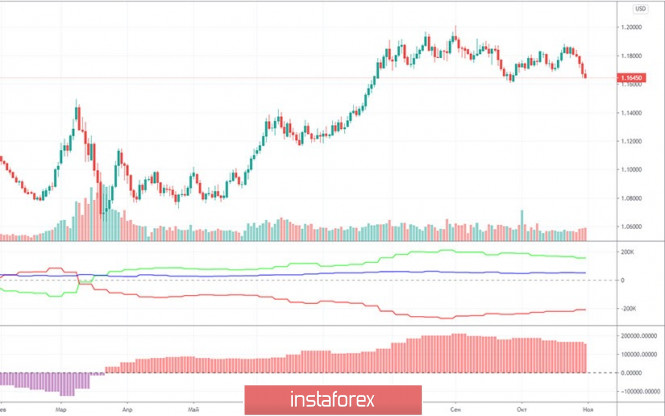 The presidential elections began in the United States on Tuesday. To be more precise, they began a few weeks ago, and by November 3, about 100 million people had already voted in America. A record turnout over the past 100 years for sure. However, despite the fact that polling stations will close in the United States literally within a few hours, this does not mean that we will find out the name of the new US President this morning. The vote count is likely to take anywhere from a few days to several weeks, as many Americans have chosen to vote safely this year by mail. Therefore, in the coming days, and maybe weeks, the markets will again be filled with rumors as to who won the election. In addition, the indexes of business activity in the service sectors will be released today, similar data will be released overseas. The most important report of the day is the ADP report on changes in the level of employment in the US private sector, however, it is unlikely for traders to focus on it. We will miss more important news today.

We have two trading ideas for November 4:

1) The EUR/USD pair failed to overcome the 1.1612-1.1624 area and began a sharp upward movement. Therefore, buyers are advised to trade to the upside while aiming for the Senkou Span B line (1.1792). Take Profit in this case can be up to 80 points. Take note that sharp price reversals and changes in the mood of market participants are still possible today.

2) Bears have let go of the initiative since they missed the pair above the downward trend line. Therefore, sellers are advised to return to trading downward with targets at 1.1612-1.1624 and the support level at 1.1571, if the price settles below the Kijun-sen line (1.1693). Take Profit in this case can range from 50 to 110 points. You should also be careful with short positions as volatility can be high throughout the day.

Interesting? Write a comment below.
 #Hot forecast and trading signals for EUR/USD on November 4. COT report. Elections coming to an end, but results will not
Forward 
Backward 