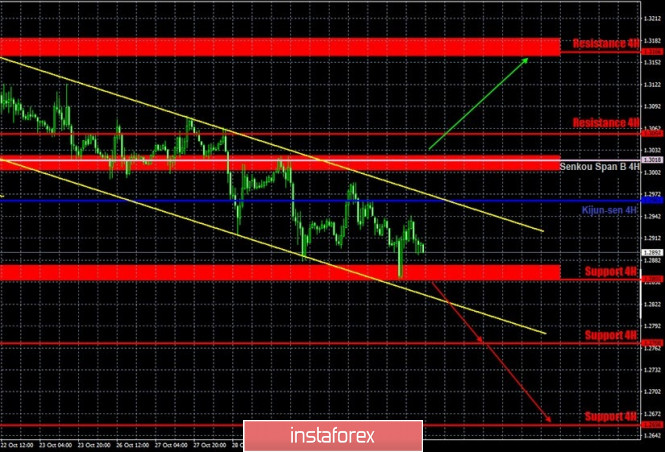 The GBP/USD pair reached the support area of 1.2854-1.2873 on Monday, November 2 and failed to overcome it on the first attempt. In general, trading was rather calm on the first trading day of the week. The rebound was followed by a systematic increase in quotes, all within the descending channel. Thus, the trend for the pound/dollar pair remains downward at this time, and the bears continue to hold the initiative in their hands. As for the bulls, they now need to leave the channel through its upper border, as well as overcome the important Senkou Span B and Kijun-sen lines. An upward movement will mean a strengthening of the British currency, which will be possible if positive information comes from London on the progress of negotiations on the deal. 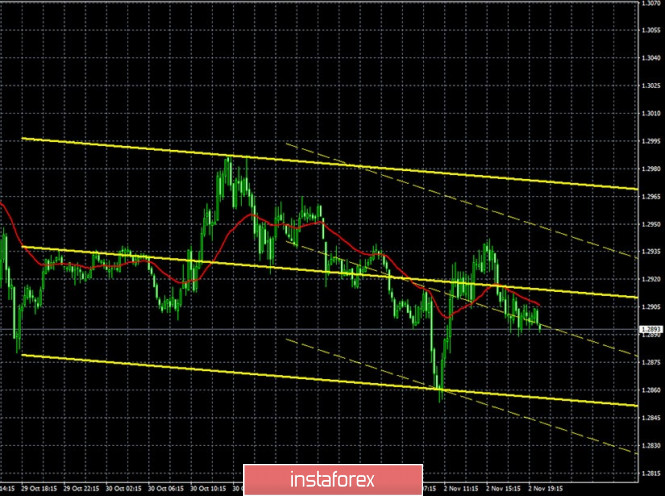 Both linear regression channels turned to the downside on the 15-minute timeframe, which indicates a continuation of the downward movement on the hourly chart. However, the pair was not allowed to go down the 1.2854-1.2873 area, so the correction may continue for some time. 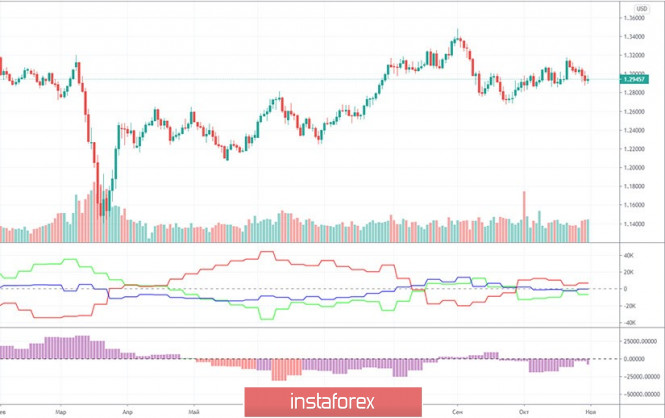 Fundamental background for GBP/USD remained unchanged on Monday. There is still no VERIFIED information on the progress of negotiations between the groups of Michel Barnier and David Frost. The US presidential elections will continue today, and no clear information about that yet. The UK published an index of business activity in the manufacturing sector, which, like European indices, turned out to be higher than forecasts and the value of September. However, the pound failed to extract special dividends from this. Markets are fully focused on more important fundamental topics, so they do not pay any attention to secondary macroeconomic publications. The US also released manufacturing PMIs, which also turned out to be higher than expected. The ISM index was 59.3 and the Markit index was 53.4. There are no major publications or other events scheduled in America and Britain other than the US presidential election on Tuesday. Thus, all the attention is paid to the American media, which will keep us informed of the voting progress.

We have two trading ideas for November 3:

1) Buyers for the pound/dollar pair failed to settle above the Kijun-Sen line. Thus, the initiative remains in the hands of the bears, and long positions, accordingly, are irrelevant. You can consider long deals again if the price settles above the Senkou Span B (1.3018) and Kijun-sen (1.2963) lines while aiming for the resistance area of 1.3160 - 1.3184. Take Profit in this case will be up to 110 points.