Overview of the EUR/USD pair. November 10. Donald Trump is the eleventh President in the history of the United States who 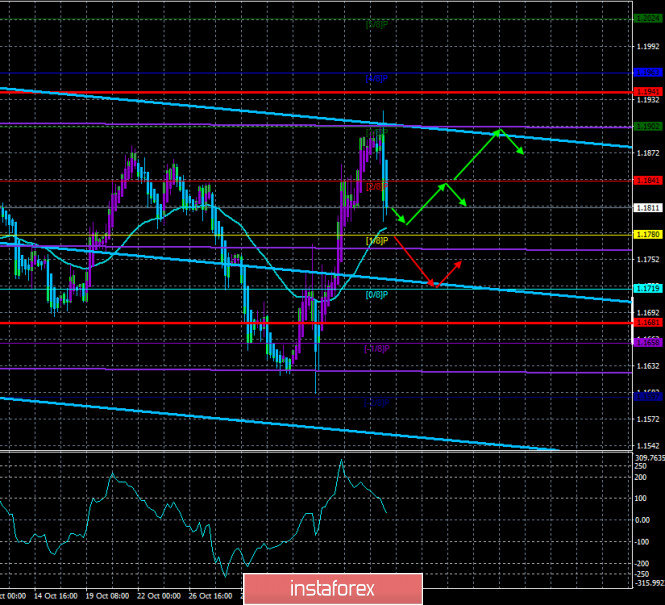 Trading on the first day of the week was again quite calm. However, instead of a brewing downward correction, we again saw an upward movement. Quotes only once again worked out the Murray level of "3/8"-1.1902. Recall that the 1.1900 level is the upper line of the $1.17-$1.19 side channel, where the price has been for most of the last three months. Well, then followed the long-awaited rebound from this level and a fairly strong drop in the euro quotes. The fundamental background that pushed the pair up all last week should have weakened slightly at the beginning of the new week and should have helped the bears. However, if the level of 1.1902 is confidently overcome, we can still expect a new round of upward movement to the maximum of September 1 - 1.2011.

Over the past week, traders have been getting rid of the US currency for one simple reason. We've been talking about it for the last two or three months. Any election is a potential change of power. The US election is a potential change of power in the country with the largest economy in the world, which in one way or another affects the economies of all other countries. Thus, a lot depends on who will be in power in this country all over the world. A striking example is the trade war with China. It would seem that Donald Trump wants to conflict with the Middle Kingdom. This trade war has "harmed" many other countries to one degree or another, and also caused damage to global GDP. Thus, it is not for nothing that we said that the US dollar is unlikely to become more expensive until the elections are in the past. That's what happened. The maximum level of 2020 is still 1.2011, and the minimum level that bears have been able to reach over the past 3 months is 1.1620. Thus, after an increase of almost 1,300 points this year, the pair managed to correct in half by 400 points, which is less than 30%. Well, traders, even when the name of the new US President became known (at least, I want to believe it), continue to get rid of the US currency. Perhaps this is a residual effect of the previous week's trading. We continue to believe that the European currency has already grown quite strongly throughout 2020. All the advantages of the European economy over the American one (in particular, a smaller drop in GDP in the second quarter) have already been worked out. Thus, for the euro currency to continue to grow in the long term, new good reasons are needed. And they, from our point of view, are not present now. In Europe, the economy contracted less in the second quarter and recovered almost all of its losses in the third. However, with the arrival of autumn, the second "wave" of the "coronavirus" began, so many European countries introduced repeated "lockdowns". And repeated "lockdowns" are new cuts in the economy. Accordingly, at the end of the year, European GDP may again sink. In contrast to the US, since no one has re-quarantined in the States, even though America remains in first place in the world in terms of the number of cases of COVID-2019 and the number of deaths from this virus. So, the American economy will continue to recover, but the European economy will not. And this factor is already playing in favor of the US dollar. Therefore, if the United States does not start a civil war named after Donald Trump or something similar in the near future, then we consider a drop in the euro/dollar pair quotes in the coming months extremely likely.

However, Donald Trump is unlikely to just give up. He lost the election and this is clear to everyone. Over the past three months, all the ratings and opinion polls have said only one thing – Joe Biden will win the election. At the same time, we can not even say that it was the figure of Joe Biden who became the key. We've already said that this was more of a "Trump or not-Trump" election than a "Trump-Biden" one. Indirectly, this assumption is confirmed by the record turnout of Americans in the elections. A total of 160 million ballots have already been counted. This is an absolute record. Americans, in the face of a severe pandemic, were not afraid to go to the polls and vote. Yes, many people voted by mail, but not all 160 million of them. Because the vast majority of Americans understood that this is almost the key election in the history of the United States. And given the fact who won them, it becomes clear what most Americans feared - Trump's re-election to a second term. Thus, Donald Trump will be only the eleventh President in the history of the United States, who failed to be re-elected. The last was George W. Bush in 1992. By and large, such statistics show the results of Trump's activities as President of the United States and how satisfied American citizens are with this activity. Joe Biden has already won a record number of votes that no President has ever won in the entire history of the country – more than 70 million. When all the votes are counted, he may even score 82 million, which is almost 7 million more than Donald Trump will score.

The US dollar, in such circumstances, can now only fear one thing – Trump's further actions. The current President is a very odious and ambitious person. Even before the election, most experts were confident that there would be no peaceful transfer of power in the event of an election defeat. On the contrary, many believe that Trump will try to make the work of his successor as difficult as possible by destroying many important papers and documents or simply taking them with him from the White House. Given the words of Trump that he is ready to stay in the White House for a third and fourth term, we can assume that he expected to be re-elected. Now, like a wounded lion, he can start tearing and throwing. He has nothing to lose. Power is everything to him. Money is everything to him. He will not lose money, but he can lose power. Thus, there is no doubt that lengthy legal proceedings will now begin, although most experts believe that Trump's defeat in the election is quite convincing and even the US Supreme Court, where six of the nine judges are Republicans, will not help the President. However, this does not mean that Trump will not do anything and this is what traders and investors are afraid of. Or they may be afraid of it in the near future. 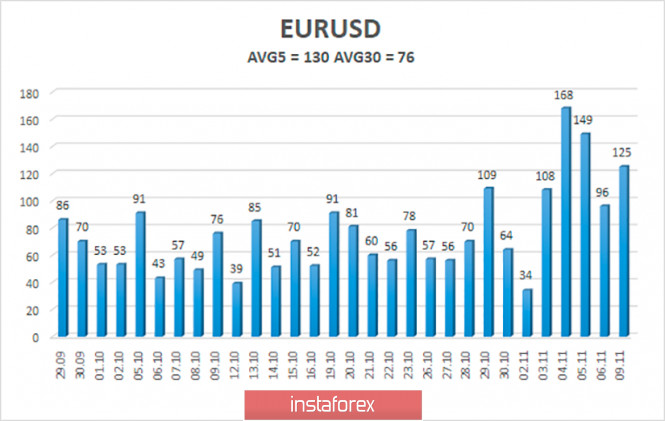 The volatility of the euro/dollar currency pair as of November 10 is 130 points and is characterized as "high". Thus, we expect the pair to move today between the levels of 1.1681 and 1.1941. A reversal of the Heiken Ashi indicator back to the top may signal the resumption of the upward movement.

Interesting? Write a comment below.
 #Overview of the EUR/USD pair. November 10. Donald Trump is the eleventh President in the history of the United States who
Forward 
Backward 