Overview of the EUR/USD pair. November 11. Donald Trump will try to finally "slam the door" loudly before leaving the post 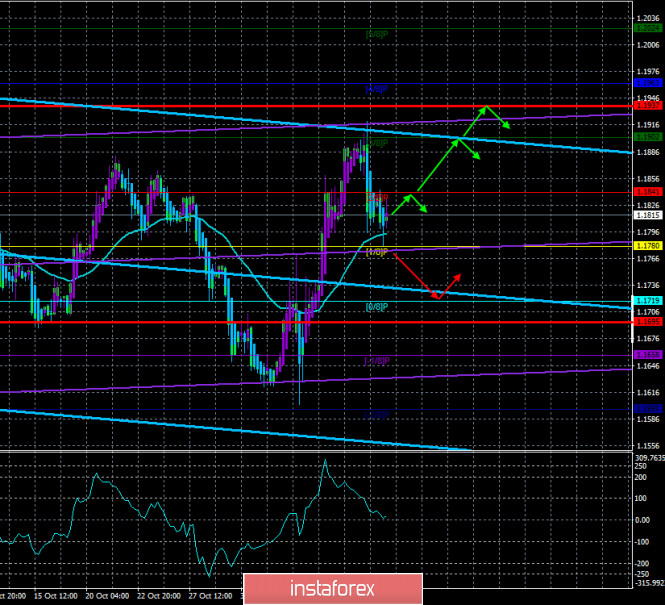 The second trading day of the week for the EUR/USD pair was almost perfect, from the point of view of technical analysis. The correction that started the day before continued and the price worked out the moving average line during the day. Thus, traders can now expect a rebound from the moving average and a resumption of the upward trend. However, if you pay more attention to various graphical constructions, it becomes clear that the prospects for strong growth in the euro currency are also few. Buyers have once again failed to overcome the level of 1.1900, which is also the upper line of the side channel $1.17-1.19, which we have talked about a lot of times. Thus, the euro currency has not been able to update the maximum of 2020, respectively, it is the US currency that has a better chance of growth now, which has been growing from time to time in recent months. However, now that the presidential election is over, it can feel calmer.

Meanwhile, the current President of the United States, Donald Trump, is not only going to challenge the results of the vote count in almost half of the states but is also going to run for President in four years. Many media outlets said this yesterday, citing sources close to the President himself. It is reported that support for Trump among American voters remains extremely high, which could allow him to win the GOP primary in four years. It is also reported that many members of the Republican party are afraid of this development, preferring that their party has a new candidate for President-2024. At the same time, the US Presidential Transfer Center (Yes, there is one) expressed support for Joe Biden and called on the current US President to launch the transfer of power procedure. "We urge the Trump administration to immediately begin the post-election transition process, and the Biden team to use the resources available under the Presidential Transition Act," the Center said in a statement.

Meanwhile, many traders are wondering what will happen next after Joe Biden won the election? Contrary to popular belief, Joe Biden will not move to the White House tomorrow or in the near future in general. Joe Biden must be voted on by the electoral college of each state in the United States. Voting is scheduled for December 14. Only after it takes place will it be possible to call Joe Biden "the new President" with confidence. And the new presidential term will begin in 2021, to be more precise – on January 20. On this day, the President and Vice President must take the oath of office on Capitol Hill. From the moment the election results are announced until January 20, the so-called "transition period" will be in effect. At this time, the new President usually recruits a team that will work with him for the next four years. In general, organizational issues will be resolved. Can the results of this election really be challenged in court by Trump and his team? It can. But it will not bring results. Simply put, Joe Biden's victory is so unequivocal that a review of the voting results in one or two states will not give the current President anything. And it won't be possible to recount the votes in all the states where Trump lost. Most experts also claim another batch of Trump's unfounded accusations against Biden. The President claims that the Democrats rigged the election, but does not provide any evidence of his words. This was the case more than a dozen times during the four years of Donald's presidency. Trump blamed the Democrats, China, the European Union, and many others in a similar vein, rarely making any strong arguments. The media and ordinary people have long been accustomed to the fact that if Trump accuses someone and threatens to provide evidence in the next week, then you can forget about it forever.

Thus, at the moment, we can really say that the process of transferring power from Trump to Biden will take place. For sure, Trump will try to "annoy" the future US President Biden to the maximum. However, these are all small things. The main thing is that Trump lost, lost on all fronts, lost as painfully as possible. Now he has only a few months left to spend as head of state. But what Trump will spend these months on is still a very big question. Here everything will depend on the very personality of Trump. Will he try to take revenge on Biden for losing the election? Will he try to endlessly challenge the election results just to delay the transfer of power as much as possible? Is there any sense in this at all, except for the consolation of self-love? Unfortunately, from our point of view, Trump is really a very proud person, so he can really slam the door of the White House very loudly at the end. Yes, so much so that some windows may fly out.

In general, the US currency may feel more relaxed in the coming days and even weeks. In Europe, the second "wave" of COVID-2019 is raging, and many countries have introduced "lockdowns". Thus, during November and December 2020, the pan-European economy may contract again or seriously slow down in its recovery. Unlike the US economy, which continues to be open. Moreover, if the Pfizer vaccine does go into mass production, then "lockdown" will not have to be introduced, since vaccination of the population may begin in a few months. Accordingly, the US economy will continue to recover at the same pace. Naturally, this state of affairs plays into the hands of the US currency, which has been feeling very hard over the past six months. However, the long-term prospects for the US dollar with the victory of Joe Biden look rather vague. We have repeatedly said that under democratic presidents, the US currency often becomes cheaper than more expensive. However, this is a perspective of several years, not months or weeks.

From a technical point of view, first, you need to wait for the price to consolidate below the moving average line and then talk about a possible further fall in the pair's quotes. We believe that this is real, and the euro/dollar pair will continue to move down, at least to the lower line of the side channel of $1.17-$1.19. 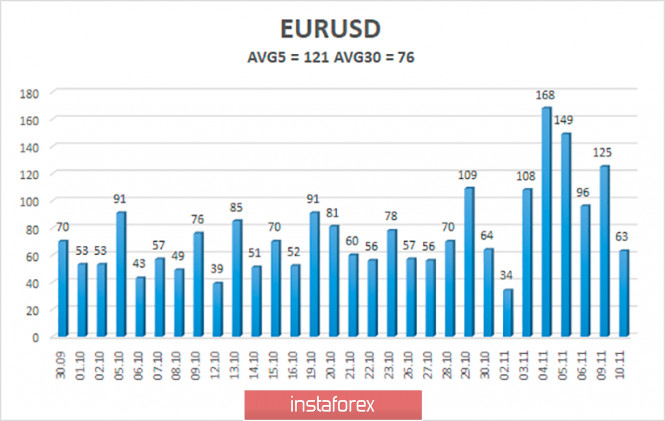 The volatility of the euro/dollar currency pair as of November 11 is 121 points and is characterized as "high". Thus, we expect the pair to move today between the levels of 1.1695 and 1.1937. A reversal of the Heiken Ashi indicator back to the top may signal the resumption of the upward movement.

Interesting? Write a comment below.
 #Overview of the EUR/USD pair. November 11. Donald Trump will try to finally "slam the door" loudly before leaving the post
Forward 
Backward 