Overview of the EUR/USD pair. November 4. The most important election in the history of the United States. Six major differences 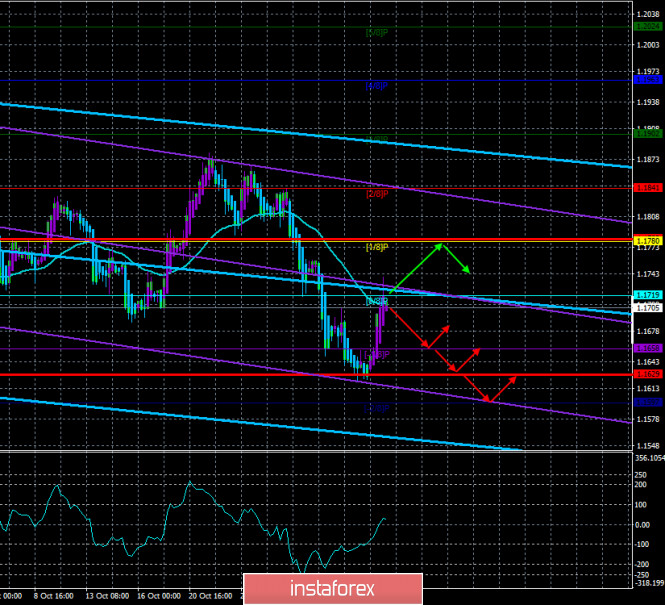 During the second trading day of the new week, the EUR/USD pair was trading higher for most of the day. In previous articles, we have already said that the fall in the pair's quotes in recent days (that is, the strengthening of the US dollar) may not be related to the elections at all. We remind you that the euro/dollar pair spent the last three months mainly between the levels of 1.1700-1.1900, that is, in the side channel. Thus, there was no "pre-election movement" all this time. Traders were just waiting for really important information that would allow them to trade the pair more reasonably. And for three months they did not wait for it. The euro could not continue to grow in any way, as it had already risen in price by 13 cents over the past six months, and there was no noticeable correction after this growth. The US dollar could not rise in price first because of the "four American crises", which we wrote about repeatedly, and later – because of the impending elections. After all, what are elections for traders and investors? This is a possible change of power. A possible change of government means possible changes in foreign and domestic policy. Therefore, it doesn't matter whether you are a trader or an investor, the environment in which you work may change in the near future. Naturally, the dollar, even after a significant fall, could not form a more or less strong correction. Thus, the election is just an important event for the participants, however, we can not say that if Biden wins (for example), the US dollar will immediately start a new fall. Yes, there is a tendency that during the rule of Republicans, the dollar tends to become more expensive, and during the rule of democratic presidents, it tends to become cheaper. However, this pattern should not be taken literally. It should be remembered that many potentially important decisions for the US economy and politics can be blocked by the lower or upper house of the US Congress, where the majority may not be with the President's party members. A vivid example of this is now the lower house of Congress, where the majority is in the hands of Democrats, who block the White House's attempts to adopt an insufficient package of economic stimulus measures. Thus, much will also depend on who will control the lower and upper houses of Congress, since the elections in America are not only for the President but also for senators and congressmen.

Meanwhile, most experts continue to believe that the current elections are the most important for the country in almost its entire history. There are a huge number of things that distinguish this election from any other. Let's consider them.

1) The current elections are taking place in a pandemic environment. Perhaps never before have elections been held in a mass epidemic. However, for the US and its current President, COVID-2019 is not just a virus that threatens the country and the people. This is an epidemic that has had the worst impact on the United States. The country has already recorded about 240 thousand deaths and more than 9 million cases of the disease. According to most Americans, the White House failed to fight the "coronavirus", and President Trump's actions were wrong. Not surprisingly, Trump's current approval ratings are low and leave him with very little chance of re-election. The most interesting thing is that Trump continues to say that the "coronavirus" is not as dangerous as doctors believe, accuses the doctors themselves of profiting from the pandemic, and also fiercely criticizes those countries that have introduced new "lockdowns".

2) The infamous televised debates. The TV debates that preceded the election were called "shameful" by the absolute majority of Western media. According to journalists, none of the candidates showed their best side, but Donald Trump especially "distinguished himself" again. During the first round of TV debates, when the current President had not yet turned off the microphone, he constantly interrupted and provoked Joe Biden, was rude and did not allow him to speak on a particular issue. This led to the fact that in the next round of televised debates, the performance rules for each candidate were tightened. Joe Biden was forced to adapt to Trump and also did not show his best side.

3) The third distinguishing feature is the age of both presidential candidates. At the moment, it is Donald Trump who is the oldest President in the history of the country. If Joe Biden is elected as the new President, he will break Trump's record, as the Democrat will turn 78 this month.

4) Scandals and "dark stories" of Trump. Perhaps never in four years has a US President had time to fall out with so many countries, international organizations, journalists, opposition forces, and so on. The list is endless. Trump fought with journalists, criticized Democrats, insulted women (in particular, the speaker of the lower house Nancy Pelosi), went into conflict with the European Union and China (as well as several other countries against which he also imposed duties), criticized Jerome Powell, and was constantly in a confrontation with Anthony Fauci. Thus, it is not surprising that after four years of his rule, he has made a huge number of enemies (or just people who do not support the idea of his re-election). Thus, we even believe that the US presidential election now looks like "Donald Trump – not Donald Trump" and not "Donald Trump – Joe Biden".

5) The fifth point just follows from the fourth. Joe Biden's ratings are unprecedented. Never before in the history of sociological research (since 1936) have the approval ratings of one of the presidential candidates been so high (more than 50%). Biden has consistently outperformed Trump by 8-13% in recent months, which gives him an extremely high chance of winning.

6) Mass riots and electoral fraud. A couple of days before the election in major US cities, companies and firms that have facades on main streets began to Board them up with plywood sheets, fearing riots and clashes between supporters of Democrats and Republicans. Biden and Trump started talking about election fraud a few months before the election itself. Well, immediately after the announcement of the results, any of the candidates are almost guaranteed to challenge the results of the vote through the Supreme Court. Donald Trump has already hedged his bets by appointing "his" man, judge Amy Barrett, to replace the prematurely deceased Ruth Ginsburg. Thus, yesterday's trading still was quite calm. The most interesting thing will be waiting for us today. 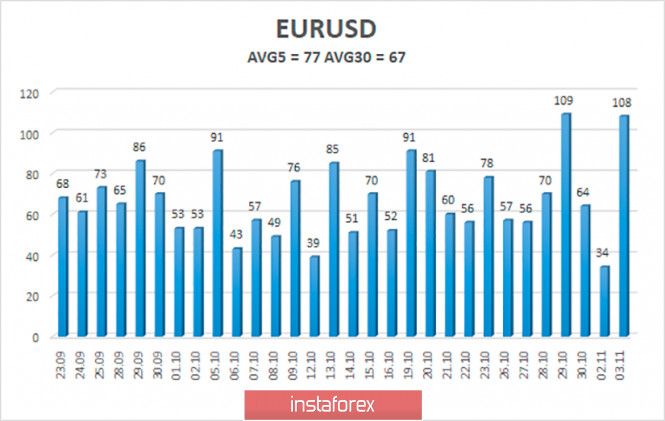 The volatility of the euro/dollar currency pair as of November 4 is 77 points and is characterized as "average". Thus, we expect the pair to move today between the levels of 1.1629 and 1.1783. A reversal of the Heiken Ashi indicator down may signal the resumption of a downward movement.

Interesting? Write a comment below.
 #Overview of the EUR/USD pair. November 4. The most important election in the history of the United States. Six major differences
Forward 
Backward 