Overview of the EUR/USD pair. November 5. Donald Trump declared himself the winner of the election 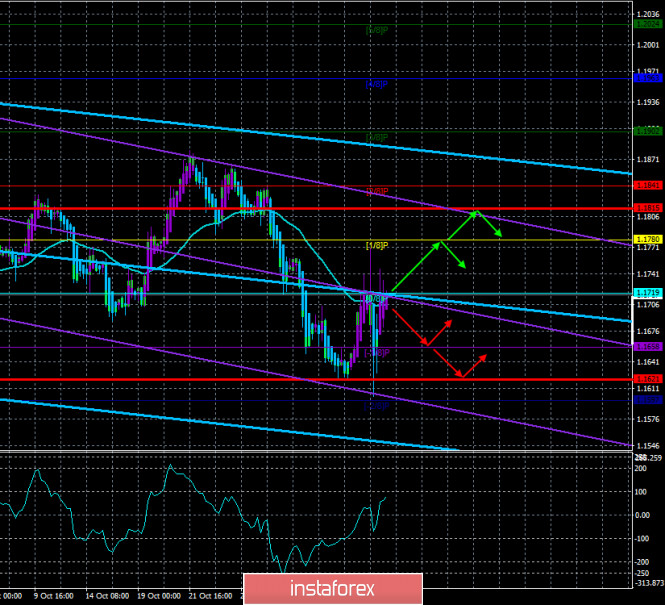 During the third trading day of the week, the EUR/USD pair first fell by 150 points and it again traded higher, rising by about the same 150 points. By and large, this is called a "storm", and we warned market participants that this is exactly what will happen. Now you can't even tell where is the main movement and where the correction is against it. Traders are panicking because the election is over and there are still no results. Anyone can win, respectively, and the panic in the market persists. In such conditions, it is naturally impossible to make forecasts for the further movement of the pair, even in the very short term. The pair overcame the moving average line several times over the last trading day. Therefore, the best option is to wait for the markets to calm down completely, and only then will it be possible to re-evaluate the technical picture and build new trading strategies.

Over the past three months, the currency market has been talking about the upcoming US elections and their possible results. Even though half of America seems to be against Donald Trump, the second half still supported him in the election (according to current data). There are no official and final voting results yet, although in most states the winner has already been determined. Still, not all votes have been counted yet. This means that whatever the results of the ballots that have not yet been counted, they will not affect the overall result in the state. Thus, the currently undecided states are Wisconsin, Georgia, Michigan, Nevada, Pennsylvania, North Carolina, Iowa, Arizona, New Hampshire, Ohio, Texas, and Florida. Biden leads in four of these states, and Trump leads in all the others. On the other hand, the gap between Trump and Biden is very small, with only 25 "electoral" votes. This means that any state can decide the fate of all elections in the United States. As you can see, so far there is no question of Joe Biden winning with a 91% probability. Moreover, most of the markets were also set up for the victory of the Democrats in the elections to the Senate and the Lower House of Congress, which will allow them to form the majority necessary for total control. However, the Senate and Congressional elections have not yet been finalized. Therefore, the victory of one or the other is still ambiguous here. The most interesting thing is that if some forecasts may not come true, then the second – come true with a vengeance. If Joe Biden's victory does not look clear even now but may turn out to be minimal, then the forecast that the fate of the election will be decided in the Supreme Court is already coming true. Before the vote count is over, Donald Trump has already declared that he won in most states and even where he did not expect to win. Trump is not confused by the fact that the vote count has not yet been completed and the situation may change five more times. He congratulated his staff on their victory and thanked everyone for their votes. Also, the current US President said that "they may try to steal his victory", naturally alluding to the Democrats. Trump immediately said that in case of defeat, he would not recognize it and would go to court. The same speech broke out, where Joe Biden urged not to rush to conclusions and wait for the final results of the election. The fact is that in 2020, the counting of votes is much slower than usual, because about 60 million Americans voted by mail. And counting postal ballots is more difficult and time-consuming. Many people voted for Biden by mail. Thus, all the unrecorded votes are most likely "Biden". However, it is impossible to say this with certainty. It is better, indeed, to wait for the final results and then draw conclusions. However, both candidates do not want to wait. Trump has already called for stopping further vote counting, hinting at fraud on the part of the Biden team. How this works is unclear. How Trump can stop the vote-counting is unclear. It is unclear what rights he has to interfere in the election process. Moreover, it is Biden who is currently winning, not Trump. And throughout the counting process, it was Joe Biden who was consistently the winner. Thus, as usual, it is extremely difficult to understand what exactly Donald Trump is talking about and what "victory" he means. Maybe his team is counting the votes themselves? In general, so far all the next insinuations of Trump look like a new portion of populism and unsubstantiated statements. Biden's staff has already responded that the vote count will not stop, and the legal team is ready to confront Trump in the Supreme Court.

And this is exactly what we have talked about and have repeatedly warned American experts and political scientists. Now the whole process can move to the courts, and no one knows what will be the results of these trials. Trump, of course, hedged in this case and appointed "his" judge to replace the untimely deceased Ruth Ginsburg. Thus, Trump will have the advantage in the Supreme Court. However, again, if Biden does win by a significant margin, it will no longer matter. Donald will not be able to accuse Democrats of fraud in several states or in all where he lost. It will be impossible to review the elections in the whole country. In general, it seemed that about 70-80% of the votes have already been counted, it remains to wait a day or two and everything will be over. But no, nothing will end, because everything is just beginning.

Well, for the US dollar, this news is not positive. First, market participants put Biden's unconditional victory in the price, as well as the Democrats' victory in the Senate and Congressional elections. Second, any further legal proceedings are a continuation of uncertainty for the US, for the US economy, and for the dollar itself. Thus, it will again be extremely difficult for the US currency to enjoy demand in the foreign exchange market until the election issue is finally closed, and one of the candidates admits defeat. 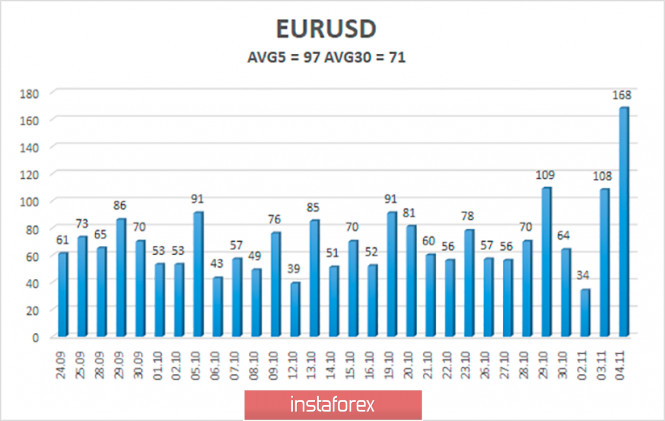 The volatility of the euro/dollar currency pair as of November 5 is 97 points and is characterized as "high". Thus, we expect the pair to move today between the levels of 1.1621 and 1.1815. A downward reversal of the Heiken Ashi indicator may signal a downward movement.

Interesting? Write a comment below.
 #Overview of the EUR/USD pair. November 5. Donald Trump declared himself the winner of the election
Forward 
Backward 