Overview of the EUR/USD pair. November 6. Donald Trump starts attacking the states where he lost the election. The vote count 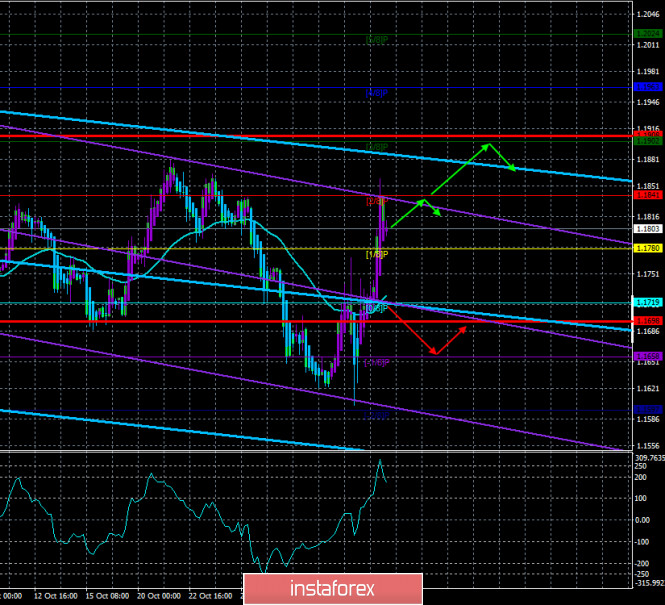 During the fourth trading day of the week, the EUR/USD pair continued the upward movement that began the day before. From a technical point of view, it was hardly possible to predict a new round of growth of the European currency by more than 150 points. However, do not forget that in America, the counting of votes continues. And in the context of this event, the fall of the US currency now looks quite logical. The thing is that the elections will not end with elections, no matter how absurd it may sound. The counting of votes will end, but the elections themselves will continue. A few months before November 3, Donald Trump began to send non-ambiguous signals that there would be no simple and calm transfer of power in the event of his defeat. The current US President began to accuse the Democrats of election fraud long before the election itself. What does this mean? This suggests that Donald Trump understood from the very beginning that his chances of winning the election are small, to say the least. Thus, Trump immediately began to prepare Americans for the fact that the Biden team would allegedly try to cheat, especially with voting by mail. Trump declared his victory in the election without even waiting for the full vote count. And just when he was losing to Joe Biden. And he lost to Biden at any point in the vote count. Thus, market participants are now just preparing for the fact that multi-week trials, recounts of votes, a new confrontation between Democrats and Republicans with tons of mutual accusations of each other will begin. Naturally, such a political situation cannot contribute to the strengthening of the US dollar. We have previously said that the United States is experiencing a full-scale political crisis, and also warned that the country is on the edge of a constitutional crisis. Recall that under US law, Trump is not required to leave the White House on January 20, even if he is defeated. That is, Trump can stay in the White House, and Biden and his team will have to "smoke" him out of the presidential administration by any means or through the same courts. Also, Trump can challenge the results of the voting in almost any state. And any trial is time. We already wrote about the most interesting difference between the US electoral system and others yesterday. Whatever the outcome of the American vote, the electoral college has every right to vote for whomever it pleases. That is, it is now the election results are based on the "electoral votes" that each state must give to a particular candidate. The electors will vote on December 14 for a particular candidate. And until they vote, it is impossible to say that one or another candidate won. There were cases when up to 10 electors tried to cast their votes to the "wrong" candidate for whom the state voted.

The Trump team has already started working towards legal proceedings. The Trump campaign appealed to the courts of Georgia, Michigan, and Pennsylvania to stop the counting of votes. Trump's staff also said they would call for a recount in both Wisconsin and Philadelphia. Also, Trump's representatives named several other states where Trump has already lost by a narrow margin. In these states, Republicans will also demand a recount. Nothing is surprising about this. This is what we have repeatedly written about over the past months. And now attention – yesterday and today, we just saw the reaction of traders to the elections. The dollar started to fall due to complete confusion and may continue to be under pressure in the next few days. And further counting of votes may just last another 1 or 2 days. In Alaska, it is reported that the vote shall take another week. In Pennsylvania, you can assume the vote until Saturday. In Nevada – the vote count stopped, saying it will resume work in a day. In general, the situation is absurd, as well as everything that concerns the US elections, as well as the election campaigns and the confrontation between Trump and Biden, which began long before the elections themselves.

But the OSCE representatives believe that there were no special violations during the elections and counting of votes. Moreover, the OSCE says that Trump regularly made baseless statements about possible fraud on the part of the Democrats. "Baseless allegations of systematic violations, in particular by the incumbent President, including on election night, undermine public confidence in democratic institutions," said OSCE representative Michael Georg Link.

Well, the situation is even more interesting with the remaining states, for which it is still unknown exactly who will win them. That is, it is still quite possible that Trump will win the remaining states and get ahead of his opponent. In this case, the Republicans will get 271 votes with the necessary 270. Thus, despite the seemingly huge gap between Biden and Trump (both before the election and after), nothing has been decided yet. It is also possible that the margin of one candidate from another will be no more than 10 or 20 votes. In other words, changing the results in just one state can make a winner a loser and vice versa. Trump has already begun preparing for legal proceedings. There is no doubt that Biden's staff is also preparing for them.

Well, the euro/dollar pair may continue to remain in the "storm" over the next few days. We have already said that traders and investors do not like uncertainty very much. It is this uncertainty that has prevented the US currency from rising in price over the past few months, even as part of a correction. Now the situation in the United States has not changed. Even if all the votes are counted in the coming days, Trump will immediately announce that he will be sued and that he will not admit defeat. Therefore, the election results will not be considered final. Thus, the US currency may continue to be in limbo for another month or even more. Everything will depend on how far Donald Trump and his staff will go in the confrontation with Biden. 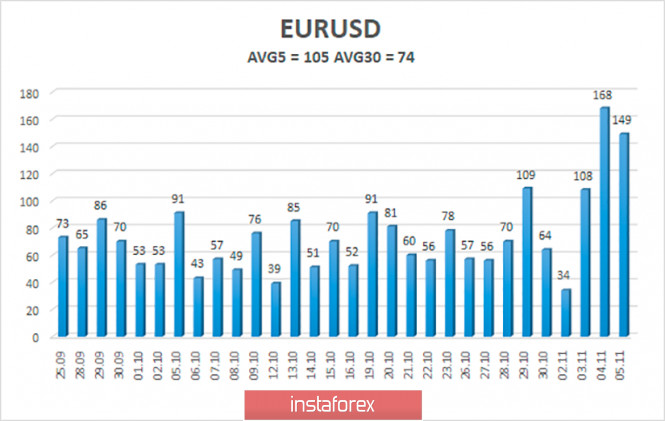 The volatility of the euro/dollar currency pair as of November 6 is 105 points and is characterized as "high". Thus, we expect the pair to move today between the levels of 1.1698 and 1.1908. A reversal of the Heiken Ashi indicator down may signal a new round of downward movement.

Interesting? Write a comment below.
 #Overview of the EUR/USD pair. November 6. Donald Trump starts attacking the states where he lost the election. The vote count
Forward 
Backward 