Overview of the EUR/USD pair. November 9. Joe Biden was elected as the new president of the United States! Donald Trump is 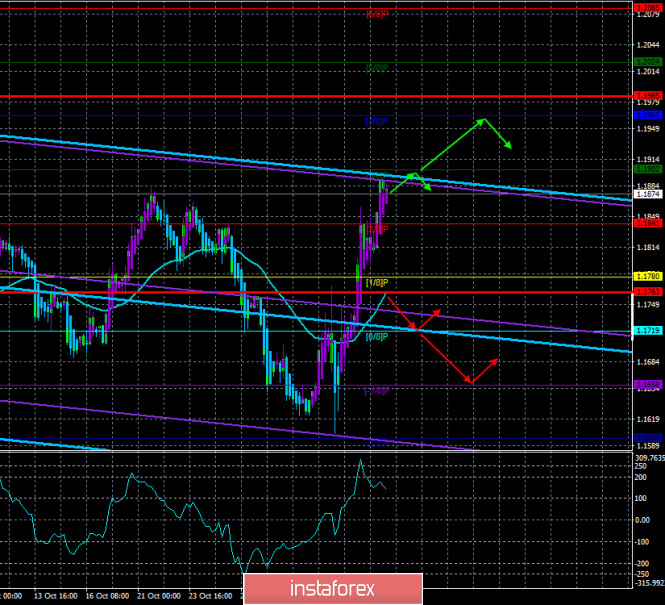 Well, a completely crazy week has ended. During this week, the quotes of the EUR/USD pair increased by 280 points in total due exclusively to the US elections. We have repeatedly said that for the US currency, the victory of one of the candidates (any) was not so terrible as the very fact of uncertainty. And I must say that at the moment this factor persists. Yes, Joe Biden won the election. He won quite predictably, but it can't be said that Donald Trump lost "by one wicket". Until the very last moment, Trump was "in the game" and only the last five wavering states decided the fate of the election not in favor of Donald. However, even in these states, he led for a long time and maintained a high chance of a final victory. However, according to Trump himself, it was he who won the election, gaining 71 million votes. He stated this on November 4 and later repeated it. However, for the EUR/USD pair, it is now important that the elections are behind us, which means that the tension should subside a little. As for the technical picture, the pair's quotes once again returned to the well-known Murray level of "3/8"-1.1902, which is also the upper line of the $1.17-$1.19 side channel, in which the pair has been very fond of trading in recent months. Thus, it is possible to rebound from this level with the beginning of a new round of downward movement, which will be logical both from a technical point of view and from a fundamental one.

It should be noted that all macroeconomic statistics from overseas on Friday were ignored by traders. This means that on Monday, market participants can start working it out. The topic of elections can now take a back seat, and the topic of "post-election showdowns" can come to the fore. Yes, everyone was preparing for this scenario, it will not come as a surprise to anyone. In the States, for example, more than 1 million residents have already signed a petition calling for canceling the election results and holding new ones or recounting the votes. It is easy to guess whose supporters this million is. Donald Trump has filed several lawsuits in state courts that also require a recount. So, from our point of view, all the fun is just beginning. First, Trump can now fully concentrate on the war for the US presidency. It is unlikely that a man like Trump will just give up and does not have some trump card up his sleeve. Second, we remind you that the current election results are, in fact, only the will of the American people. The US President will be chosen by the electoral college on December 14. Yes, in theory, they should give their votes to the candidate who was chosen in their state. However, they are not required to do so by law. So there may also be surprises here.

Meanwhile, experts have begun to study the chances of Donald Trump reviewing the results of the voting in the number of states necessary for an overall victory. According to political scientists, this is not just possible in several states, but very likely. First of all, this is an absolutely normal practice for America. Second, in states where the gap between the two candidates is less than 1% (or another value set by state law), a recount will be made even without a request from one of the candidates. Thus, in Georgia, Michigan, and Wisconsin, the results may be revised. On the other hand, Trump has gained a total of 214 "electoral votes" so far, and Biden – 290. North Carolina, where there are no final results yet, can bring Trump another 15 votes, and Georgia, where the gap between candidates is only 0.2%. In this case, Trump will get 245 votes. If you review the results of the voting in the states of Wisconsin (Biden's advantage is only 0.7%) and, for example, Pennsylvania or Arizona, where Biden's advantage is also small, then Trump may still achieve victory through the courts. However, many experts also say that the chances of Trump reviewing the results are small. Trump will now be suing the US President-elect, which will complicate any litigation. As practice shows, a recount can work if the gap between competitors is extremely small, for example, no more than 5 or 10 thousand votes. However, there are few such states. That's why Trump doesn't even have a theoretical chance. However, experts also do not doubt that Trump will go to the courts and fight to the last. On the other hand, what did he have to lose? Until January 20, he will remain president of the country in any case. Until then, he will likely use his position as head of state to review the election results. What else can he do?

Well, it should also be noted that some courts in Philadelphia, Georgia, and Michigan have already rejected the claims of the Donald Trump team for a recount of votes, considering the grounds for this insufficient. Trump himself said: "We will legally challenge all states that Biden wins following the laws on voter fraud and election fraud." At the same time, a very wild and discouraging event occurred in America, which best reflects the real attitude of the media and the country's population to Donald Trump. During Trump's speech at the White House, the leading US TV channels simply interrupted the broadcast, and their hosts said live that everything the President says is untrue. Trump said: "If you count the legitimate votes, I win easily. And if you also count illegal votes, you will understand that they are trying to steal our elections." And of course, the Trump team "has accumulated a lot of evidence" of fraud on the part of the Democrats. However, it is unlikely that anyone will ever see them. At the time, Trump also promised to show evidence of China's guilt in deliberately releasing the "coronavirus" into the wild. Experts also report that for the case of a large-scale recount of votes to reach the US Supreme court (where Trump has the support of 6 out of 9 judges at once), the courts at the state level mustn't cope with their task. In general, Trump will go to the courts, but most likely will lose. 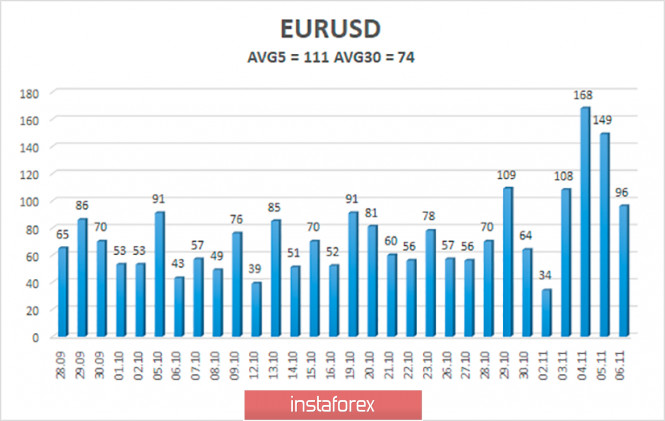 The volatility of the euro/dollar currency pair as of November 9 is 111 points and is characterized as "high". Thus, we expect the pair to move today between the levels of 1.1763 and 1.1985. A reversal of the Heiken Ashi indicator down may signal a new round of downward movement.

Interesting? Write a comment below.
 #Overview of the EUR/USD pair. November 9. Joe Biden was elected as the new president of the United States! Donald Trump is
Forward 
Backward 