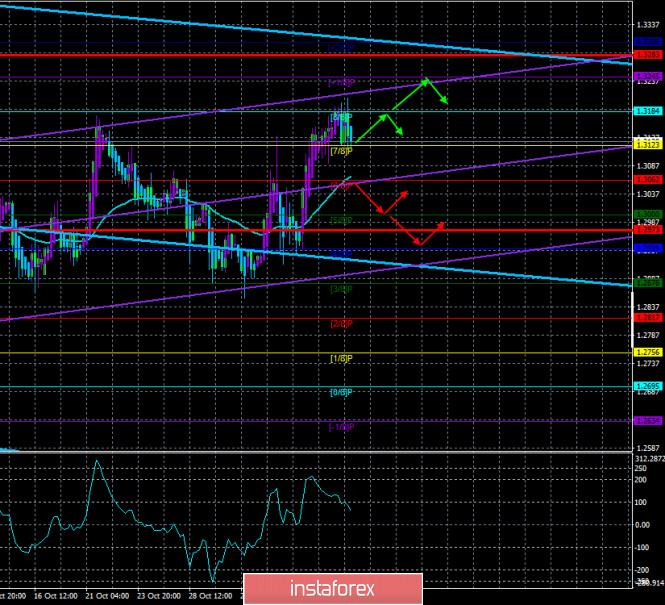 The British pound sterling paired with the US dollar on Monday reached the Murray level of "8/8"-1.3184. During the day, there was a timid attempt to start a round of corrective movement to the moving average line, however, it ended unsuccessfully. Thus, the pound/dollar pair continues to trade in a similar way to the euro/dollar pair. Thus, we make an almost unambiguous conclusion: the mood of market participants now depends on the fundamental background in America. However, we made similar conclusions last week, when traders cheerfully ignored the Bank of England meeting and its "dovish" results, as well as the failure of the next round of negotiations between the groups of Michel Barnier and David Frost. Only these two events could cause the pound to fall by 100-200 points. And if you add in the macroeconomic statistics from overseas on Friday, the pound could lose even more. However, the political issue continues to be in the first place for market participants, so the US dollar remains under pressure.

If the results of the US election are not reviewed, then Donald Trump will leave the office. And along with Trump, Boris Johnson's hopes of concluding a trade agreement with the United States may also collapse. Recall that Trump and Johnson have repeatedly called themselves friends and Washington has repeatedly influenced London's international politics. For example, in the case of 5G networks in Britain, which was supposed to be developed by the Chinese company Huawei, but Boris Johnson at the last moment refused to cooperate with it, as many believe due to the patronage of Trump, who conflicts with both Beijing and Huawei separately. However, during the first year and a half of Boris Johnson's Premiership, negotiations with Washington did not even begin. There were only preliminary discussions about the future agreement, nothing more. But now that Joe Biden is likely to come to power, things are getting much more interesting and fun for Britain. Recall that Biden has Irish roots and is very interested in everything that happens in his homeland. Thus, he highly honors the Belfast Agreement of 1998, which ended 30 years of bloody confrontation on the island. Even before the election, Biden said that he also highly honors any agreement with the European Union, as it applies to Ireland, too. When Boris Johnson drafted his bill "on the internal market of Great Britain", Biden was one of the first to condemn London's actions, saying that any violation of international law would greatly complicate further negotiations between London and Washington. Biden also said that any violations of the Brexit agreement and the Protocol on the Northern Ireland border will not add to the understanding between the White House and 10 Downing Street. Now Johnson finds himself in a very bad situation. The agreement with the European Union still "does not smell". The back-up agreement with America has not even begun to be discussed yet. If there is no agreement with the EU, the UK Parliament will approve the "Johnson bill", which violates previously reached agreements with the EU. The EU initiates legal proceedings, and the States can refuse to discuss any trade deal with London. Or offer much less attractive terms to Johnson. So, for some reason, the British outlook is looking worse and worse day by day. "I think there are good chances to agree. I never believed that this would be a failure, no matter what the US administration was," the British Prime Minister said. Johnson also said that he can't wait to work with Joe Biden in various areas, such as the fight against climate change, trade, and international security. But Joe Biden has repeatedly criticized Johnson, called him a "clone of Trump", and also criticized the UK's exit from the EU. Building a relationship with Biden will be much more difficult for Johnson.

Meanwhile, Michel Barnier and David Frost are making a new go at the trade deal. Negotiations on a trade agreement are resuming in London. "Happy to be back in London today and renew our efforts to reach an agreement on future EU-UK cooperation," Barnier wrote on Twitter. The EU chief negotiator also said that to reach an agreement, reliable guarantees of free and fair trade, as well as mutual access to markets and fishing are needed. The most interesting thing is that none of the participants in the negotiation process, as well as the top officials of the UK and the European Union, are now talking about the deadline that Johnson set earlier. Recall that the last deadline expired on October 15, but to try to reach an agreement, Johnson allowed the negotiations to be extended for one month. This month is coming to an end. The new round of negotiations should last at least a week. Thus, it seems that Boris will again postpone his deadline, and the negotiations will continue for as long as necessary, and not as long as the British Prime Minister considers necessary. Johnson cannot fail to understand that without a deal with the EU, the British economy will be very hard in 2021. And now there is a change of power in the US, which reduces the chances of a trade agreement with Washington. In general, wherever you throw it, there is a wedge everywhere. Perhaps because of this, Johnson becomes more malleable and no longer makes unsubstantiated statements, does not try to blackmail and exert political pressure on Brussels.

However, for the pound, all this does not matter yet. Because negotiations are not a deal. The very fact of negotiations will not make the British economy any better. Therefore, the British currency will have a good chance of growth when there is good news from the UK. In recent months, the pound has risen in price, solely due to the failed fundamental background from overseas. But any fairy tale comes to an end. We have repeatedly said that the pound had no reason to grow. Moreover, the UK's GDP may also shrink at the end of 2020 due to the "lockdown", and the Bank of England has already expanded its quantitative easing program, and it may introduce negative rates in early 2021. 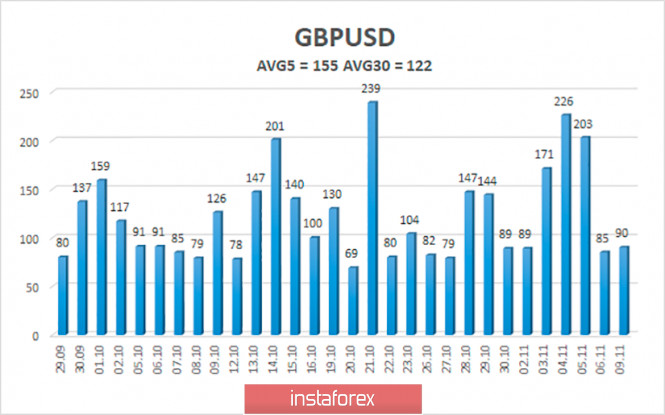 The average volatility of the GBP/USD pair is currently 155 points per day. For the pound/dollar pair, this value is "high". On Tuesday, November 10, thus, we expect movement inside the channel, limited by the levels of 1.2973 and 1.3283. A reversal of the Heiken Ashi indicator downwards signals a round of downward correction.

The GBP/USD pair is still in an upward movement on the 4-hour timeframe, however, it signals a desire to start correcting. Thus, today it is recommended to keep open long positions with targets of 1.3245 and 1.3283 until the Heiken Ashi indicator turns down. It is recommended to trade the pair down with targets of 1.3000 and 1.2973 if the price is fixed below the moving average line.