Overview of the GBP/USD pair. November 11. Boris Johnson has suffered another defeat that could save his relationship with 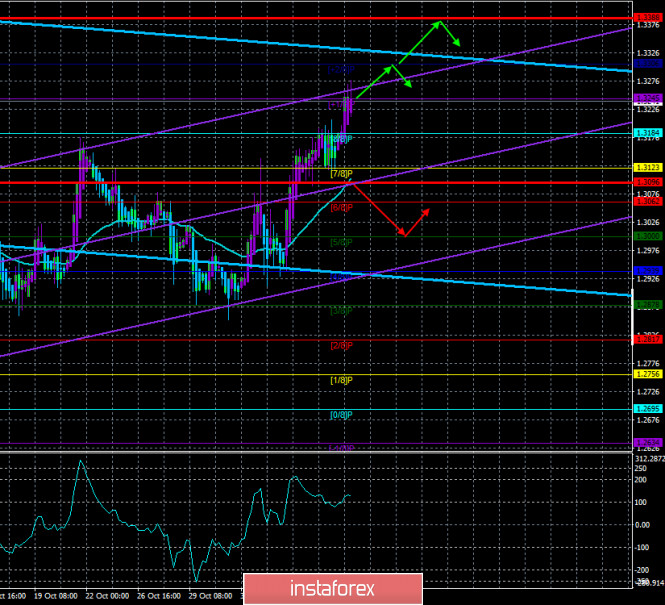 The British pound sterling paired with the US dollar on Tuesday continued to "tear and throw". If the European currency began to adjust, the British pound continued to rise in price against the US dollar for most of the day. We have repeatedly called into question the expediency and validity of the actions of market participants who actively buy the pound. It should be understood that the prospects for the British economy remain extremely vague. There is no positive news regarding the negotiation process between the groups of Michel Barnier and David Frost. In the UK, unlike the US, a repeated "lockdown" has been introduced and there is no doubt that it will be reflected in the macroeconomic indicators. Naturally, negative. Thus, it is not clear what factors are driving the pound up in price. However, we still believe that the British currency will start to fall in the near future, and now it is extremely overbought.

Meanwhile, in the UK, a rather unexpected and resonant event occurred in the Parliament. The Upper House of Parliament (the House of Lords) blocked the "Johnson bill", which violates the Brexit agreement reached with the European Union in 2019. British media reported that the House of Lords demanded to remove all controversial items from the bill "on the internal market of Great Britain", which should protect trade between Northern Ireland, Wales, England, and Scotland after Brexit. The government does not have a majority in the Upper House of Parliament, but even some representatives of the Conservative Party voted against this bill. "The government must accept the repeal of these offensive provisions and start restoring our international reputation," said Angela Smith, the leader of the Labor Party in the House of Lords. However, it is reported that the government will continue to try to pass this bill, according to sources close to Boris Johnson. Normally, the House of Lords does not block bills that have been approved by the House of Commons. However, this time, Boris Johnson's actions may not just damage the UK, but also damage its reputation on the international stage for many years to come. Thus, it would be better for the UK if this bill is never passed. We can also note another defeat of Boris Johnson in his career as Prime Minister of Great Britain. This time, he failed to pass a bill through Parliament, even if the majority of members of the Lower House are conservatives. The Upper House has started blocking Boris Johnson's initiatives, which is rare. Thus, even members of Parliament are beginning to show how much they trust the Johnson government. Yet most of the rights turn out to be Joe Biden, who has repeatedly called Johnson a "clone of Trump". Indeed, Boris Johnson is similar to Trump in appearance, also likes to act in a completely discouraging manner, as if he is running his own personal business, and not running the country. Thus, we believe that sooner or later Johnson will follow in the footsteps of Trump. Donald managed to hold out for four years in office, and Boris may not even be able to do this task. The British Parliament does not need to start showing votes of no confidence in the Prime Minister, as was repeatedly with Theresa May.

Meanwhile, the topic of Joe Biden's victory in the US election could not but affect future relations between the UK and America. After all, now Boris Johnson will have to negotiate not with his "friend" Trump, but with Biden, who has repeatedly criticized him. And the stumbling block in relations between Biden and Johnson may be just a bill that openly violates the principles of international law, violates the provisions of the Protocol on the Northern Irish border, and even affects the personal interests of Biden, who has Northern Irish roots. Johnson, of course, tries to put a good face on a bad game and declares that the United States and Great Britain are in any case allies and friends, have a similar ideology and goals. This means that Washington and London will be able to agree on a trade deal and fruitful cooperation on many issues. However, experts do not think so. Johnson is still unable to agree on fruitful cooperation even with the European Union, of which the UK has been a member in recent decades. His effectiveness as the head of the country is still very low, and there are a lot of mistakes. Thus, US-British relations may indeed be very tense in the next four years. Especially if Johnson does show himself to the world as a politician whose word is worthless.

And the above factors are just additional factors that may also put pressure on the British currency in the coming months. In addition to all the economic problems, Britain may face geopolitical problems (the independence referendum in Scotland). Also, we should not forget that the Bank of England has been studying the possibility of introducing negative rates for several months, and "there is no smoke without fire". Thus, we believe that the economic situation of the United Kingdom will deteriorate in the future. Both at the end of 2020 and during 2021. It is also worth recalling that the British economy lost 20% in the second quarter and may lose some more percent at the end of the third and beginning of the fourth due to the "lockdown". Thus, we once again show our surprise at the fact that the British currency is growing at this time, especially when the European currency is falling. It would seem that the US dollar has been the driver for both major pairs in recent weeks. But yesterday, the euro/dollar and pound/dollar pairs were trading in different directions. Despite the fact that there were no macroeconomic publications in the UK and the European Union that could seriously affect the mood of traders, there were no resonant speeches by top officials.

From a technical point of view, the formation of an upward trend continues, which is indicated by even the fastest Heiken Ashi indicator. Thus, buyers keep the initiative in their hands and continue to dominate the market. Sellers will not be able to join the game until the price is fixed below the moving average line. 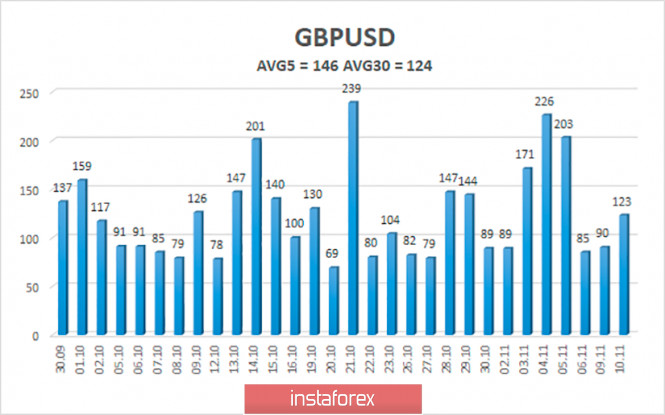 The average volatility of the GBP/USD pair is currently 146 points per day. For the pound/dollar pair, this value is "high". On Wednesday, November 11, thus, we expect movement inside the channel, limited by the levels of 1.3096 and 1.3388. A reversal of the Heiken Ashi indicator downwards signals a round of downward correction.

Interesting? Write a comment below.
 #Overview of the GBP/USD pair. November 11. Boris Johnson has suffered another defeat that could save his relationship with
Forward 
Backward 