Overview of the GBP/USD pair. November 2. The UK is going into quarantine. Boris Johnson announced the introduction of a 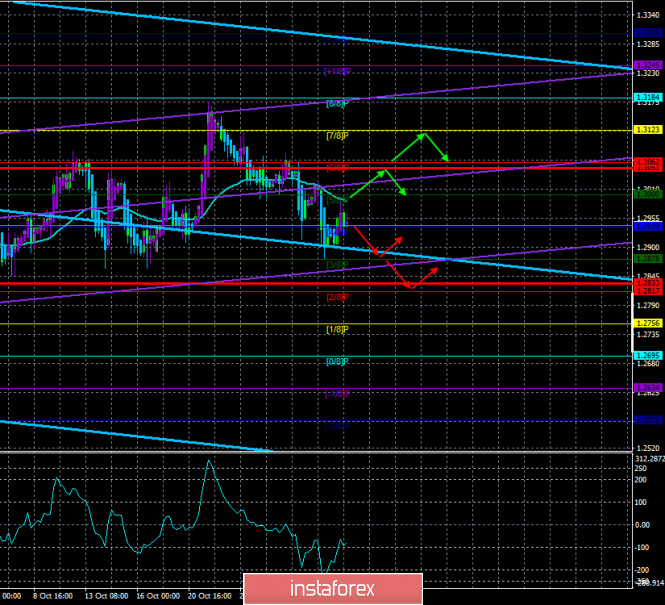 The British pound sterling paired with the US currency on Friday began a new round of upward correction. However, in general, it continues to trade quite calmly in recent days and with a clear downward bias. We have repeatedly said that we expect a resumption of the downward trend, as there are a lot of technical factors in favor of this. Starting from the price rebound from the 61.8% Fibonacci level after the fall on September 1, ending with another overcoming of the moving average line and overbought of the British pound in the current fundamental conditions. "Foundation" is generally a separate conversation that has a complex impact on the foreign exchange market and its participants. Perhaps it is for the pound/dollar pair that the "Foundation" is the most complex and confusing. In addition to all the American problems and the upcoming elections, which we have already written about many times, there are still extremely big British problems for the GBP/USD pair, extremely weak prospects for the British economy, and the problem of the lack of a trade deal with the European Union. Thus, for the pound sterling, the fundamental background is bad, and for the US currency, it is also "no sugar".

The situation with the "coronavirus" in the UK is also no better than in the US. If in the States there is now an increase in cases of the disease to 100 thousand per day (with a population of 328 million), then in the UK there is an increase to 25 thousand per day (with a population of 66 million). That is, in relative comparison, the numbers are approximately the same. However, this weekend it became known that Boris Johnson decided to follow the example of his German and French colleagues and also introduced a second "lockdown" from November 5 to December 2. "From Thursday, the main message will be the same as during the spring lockdown - stay at home," Johnson said. However, "lockdown" this time will still not be as "tough" as in the spring. Firstly, schools, colleges, and universities will work. Britons will be allowed to go to the store, to work, to the doctor, and their loved ones. By and large, all restrictions apply only to services and entertainment. Shops (all but grocery stores), hairdressers, beauty salons, gyms, and various entertainment venues will be closed. All trips abroad, except for workers, are prohibited. Thus, the British were restricted access to services and entertainment, while Johnson tried to keep the economy itself open as much as possible. However, earlier the British Prime Minister stated that there will be no repeated "lockdown". And earlier that "he would rather die in a ditch than ask the European Union to extend the deadline for negotiations." Thus, it is not the first time that Johnson has "forgotten" about his previous statements. By the way, literally one of these days we will be able to find out what results of such a policy will be for Donald Trump, who also very often makes unfounded, unsubstantiated, misleading statements. Also, Johnson said that this year's Christmas celebration may be very different from the usual, and small and medium-sized businesses may suffer serious losses. However, we still approve of the actions of the British government in this matter, since we are still talking about the lives and health of British citizens.

Meanwhile, there is still no information about the negotiations on the Brexit trade agreement. The next round of talks was supposed to end last Thursday, however, there were no speeches from Boris Johnson, Michel Barnier, David Frost, Ursula von der Leyen, or Charles Michel on this occasion. Thus, we conclude that negotiations are ongoing, but we can only guess at the presence or absence of progress. On the one hand, if the negotiations continue all this time, then there is some progress. None of the previous rounds lasted more than a week. Usually, the parties very quickly concluded that no one wants to give in to anything and parted until the next stage. This time, however, the groups of Michel Barnier and David Frost are taking a long time to discuss the future relationship between the UK and the European Union. Thus, it is possible to assume that the parties are still moving towards each other. The question here is different. Will this progress be enough for a trade agreement? After all, there are at least several important and controversial issues between the parties, in which it will be extremely difficult to reach a compromise. But Brussels and London want to conclude not just an agreement, but an agreement within the established time frame, so that from January 1, 2021, they do not have to trade with each other under WTO rules. Thus, they have a maximum of two weeks to reach a consensus, after which the negotiations can once again be curtailed. In principle, the situation here is the same as with the US elections. Traders have no choice but to wait for information. We do not recommend trying to guess how the negotiations will end, as this is a thankless task.

Well, in the new week, there will be another important event for the British pound. This is a meeting of the Bank of England. Recall that the British regulator has been talking about expanding the quantitative easing program for a long time. Also, market participants have little doubt that the BA will go to the introduction of negative rates. However, if negative rates are expected by the markets in 2021, the Bank of England will most likely decide to expand the QE program this Thursday. In principle, this is an logical and expected decision of the Bank of England, since the British economy is not only experiencing problems now but is almost guaranteed to continue experiencing them in 2021. The recovery of British GDP in the third quarter, according to preliminary estimates, is not too high, about 15% q/q after losses of 19.8% q/q in the second quarter. Moreover, the repeated "lockdown" will affect the economy of the Foggy Albion, although, in our opinion, this quarantine will be less "tough" than the spring one. Thus, the British regulator simply has no other options but to continue to ease monetary policy. 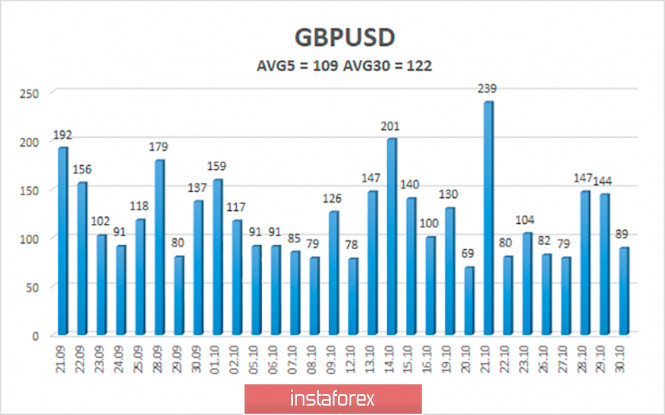 The average volatility of the GBP/USD pair is currently 109 points per day. For the pound/dollar pair, this value is "high". On Monday, November 2, thus, we expect movement inside the channel, limited by the levels of 1.2833 and 1.3051. The reversal of the Heiken Ashi indicator down may signal a possible resumption of the downward movement.

The GBP/USD pair has started a new round of corrective movement on the 4-hour timeframe. Thus, today it is recommended to open new short positions with targets of 1.2878 and 1.2833 as soon as the Heiken Ashi indicator turns down. It is recommended to trade the pair for an increase with targets of 1.3062 and 1.3123 if the price is fixed back above the moving average line.

Interesting? Write a comment below.
 #Overview of the GBP/USD pair. November 2. The UK is going into quarantine. Boris Johnson announced the introduction of a
Forward 
Backward 