Overview of the GBP/USD pair. November 3. Media: Michel Barnier and David Frost managed to reach a compromise on the "fish 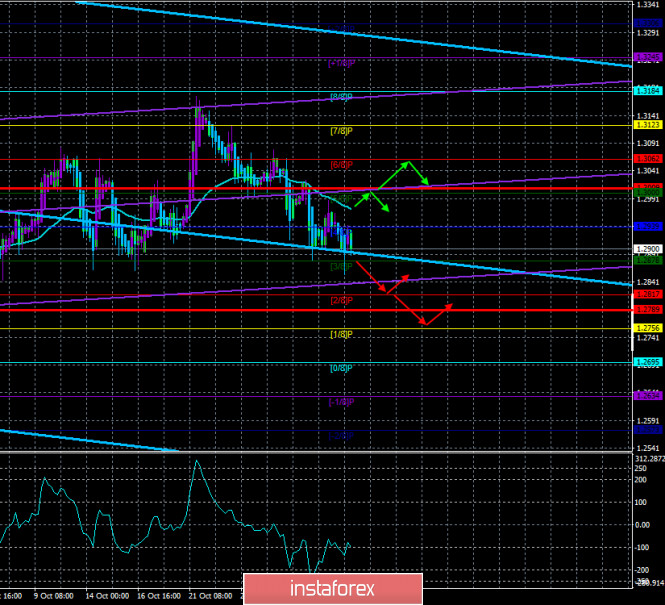 The British pound sterling paired with the US currency on the first trading day of the week also traded with a slight decrease, but with fairly low volatility. Traders are already fully focused on the upcoming US elections, and do not want to take unnecessary risks. Thus, by and large, nothing new can be said now. In America, it all comes down to today's election, and in the UK, it all comes down to Brexit and negotiations on a trade deal between London and Brussels, and on which there is still no new information. Thus, traders still have nothing to pay attention to and nothing to react to. Just rumors, speculation, and expectations.

Meanwhile, a new batch of rumors did arrive from London. This time, the British media say that Michel Barnier and David Frost managed to reach a compromise on the most important issue – the issue of fishing. The British media write that "the deal is almost reached", although it remains unclear why this particular wording is present, and how the remaining controversial issues are resolved. However, the publications also report that the new agreements on British waters will not appeal to those who voted for the country's exit from the EU. Boris Johnson has previously promised that the UK will regain full control of British waters, but things are moving towards the fact that European fishermen will have access to British waters next year. According to media reports, Britain insists on certain fish quotas, which must be reviewed annually, while the European Union insists on more specific and precise guarantees of access to British waters. However, if all the information provided is true, then this is a breakthrough in the negotiations and a deal can be concluded in the near future. If so, this is great news for the UK economy and the British pound. Of course, some damage to the economy will still be caused by the country's withdrawal from the EU, this cannot be avoided, but now it will be largely mitigated due to the existence of a trade agreement.

Meanwhile, Brexit leader Nigel Farage, one of the ideologues of all Brexit, has renamed his party to "Reform UK" and believes that the British government has cornered itself with a new lockdown and is going to fight against the "coronavirus". Farage believes that quarantine and isolation are necessary only for the most vulnerable categories of citizens, and not for the whole country. "The government has buried itself in a hole with the coronavirus and, instead of admitting mistakes, continues to dig further," Farage believes. "A new lockdown will lead to the loss of more lives than could have been saved, as patients without COVID-19, but with various other diseases, will again have to postpone or cancel a treatment. Suicide cases will increase. Businesses and jobs are dying." According to the leader of the "Brexit" party, one must learn to live with the virus, and not constantly hide from it in fear.

At the same time, US President Donald Trump criticized at one of his campaign rallies the measures taken by the European authorities to contain the "coronavirus". "Europe introduced draconian restrictions, and the number of cases and deaths still increased. Think about it. Now they're doing it again. Why the hell are they doing this? I thought about going and explaining to them, but they closed parts of Europe again," Trump said. Thus, the American President continues to stand by his initial opinion about the "coronavirus". According to the US President, this virus is not as terrible as it seems, and it is unacceptable to stop the economy of an entire country because of it. Thus, if one of the readers was going to move to the United States or Europe, there is still an opportunity to change their decision, since the attitude to healthcare in these locations is radically opposite. Trump continues to press that a vaccine will soon be invented and no "lockdown" will be required anymore. However, earlier Trump promised a vaccine by the end of October. Doctors continue to insist that creating a vaccine is a very long process, and even if it is invented in the near future, mass vaccination will not begin until mid-2021. At the moment, more than 200 thousand people have already died in the States from COVID. By next summer, another grim forecast by Dr. Anthony Fauci may come true – 400,000 deaths.

From a technical point of view, the downward trend remains and Monday trading was rather sluggish. Buyers of the British currency are waiting for positive and official information on Brexit, buyers of the US dollar are waiting for the elections and their results. Thus, so far the pound/dollar pair is trading very calmly, but today everything may change. Volatility in the past seven days has been fairly average, and the prospects for a downward movement, although they look more attractive, may be spoiled by the fundamental background. In general, in the coming days, a lot will depend on the fundamental background and on the nature of the news that will come from Britain and the United States. At the same time, macroeconomic statistics will continue to be ignored by market participants. 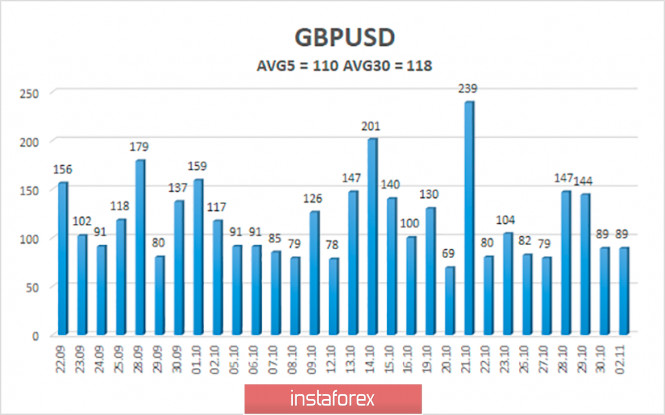 The average volatility of the GBP/USD pair is currently 109 points per day. For the pound/dollar pair, this value is "high". On Tuesday, November 3, thus, we expect movement inside the channel, limited by the levels of 1.2789 and 1.3009. A reversal of the Heiken Ashi indicator to the top signals a possible round of corrective movement.

The GBP/USD pair resumed its downward movement on the 4-hour timeframe. Thus, today it is recommended to keep open short positions with targets of 1.2817 and 1.2789 until the Heiken Ashi indicator turns up. It is recommended to trade the pair for an increase with targets of 1.3062 and 1.3123 if the price is fixed back above the moving average line.

Interesting? Write a comment below.
 #Overview of the GBP/USD pair. November 3. Media: Michel Barnier and David Frost managed to reach a compromise on the "fish
Forward 
Backward 