Overview of the GBP/USD pair. November 4. Negotiations are negotiations, and trials are scheduled. Boris Johnson defends 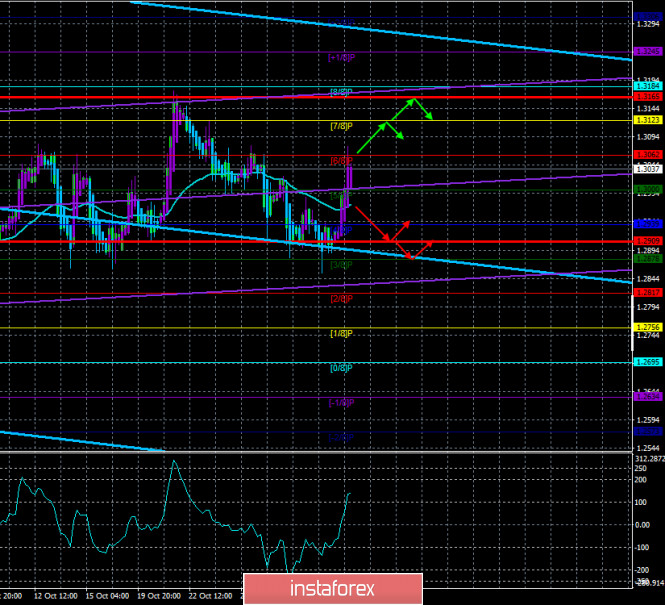 The British pound sterling paired with the US currency on the second trading day of the week also traded higher and broke the moving average line. Thus, in the case of the pound/dollar pair, it was a matter of falling US currency quotes on the eve of the US presidential election, and not a sharp increase in demand for the British currency. News slowly continues to come to the disposal of traders, but among them, none could overshadow the importance of the US presidential election or the still ongoing negotiations on a trade deal on Brexit. By the way, no new messages were received on the second topic. Thus, yesterday (and most likely today), traders will be fully focused on any information related specifically to the elections in America.

The only thing that I would like to note now on the undying topic of "Brexit" is that representatives of the European Commission said on Monday that there was no response from the UK to the official notification of a violation of the provisions on the Northern Ireland border of the agreement on Britain's withdrawal from the EU. A month ago, the European Commission sent an official letter to London, to which, after the deadline, it did not receive a response. Thus, said the representative of the European Commission Daniel Ferrie, the European Union will now study the possibility of taking further legal measures. Ferrie also said that there are still differences in the negotiations regarding the "fish issue", and on Wednesday the chief negotiator from the European Union, Michel Barnier, will have to make a statement on the current situation in the negotiations. From our point of view, all the optimism that traders could absorb thanks to the latest "insider" messages has disappeared. We will remind that earlier there were reports that the parties reached a consensus on some controversial issues, and are also close to agreeing on the "fish issue". As you can see, European Commission officials are not aware of what is happening in London. Thus, we believe that the chances of reaching an agreement have increased recently, but not so much that we can talk about an agreement as a fait accompli. We still recommend waiting for official information from Michel Barnier or David Frost. It is also clear from the statement of the representative of the European Commission that the European Union is not going to let go of the issue of London's violation of previous agreements on the Northern Ireland border. If the "Boris Johnson bill" comes into force, it will mean that London and Brussels will enter a new phase of confrontation. How, then, the issue of a trade agreement and any relations between the Bloc and the Kingdom will be resolved is unclear. As we can see, there are still a lot of uncertainties regarding the future coexistence of the Alliance and Foggy Albion.

Meanwhile, the British, according to surveys conducted by the well-known company YouGov, are beginning to regret their decision in the 2016 independence referendum. According to the latest survey, the number of British adults who believe that the decision to leave the EU was right is only 38%, while the number of those who believe this decision was wrong is 50% of those surveyed. It is also reported that this is the largest gap between the first and second in favor of the second over the past 4 years.

At the same time, British Prime Minister Boris Johnson said that his government had no choice whether or not to introduce a "lockdown". "According to the models created, if we were inactive, twice as many people could die this winter as during the first wave. In light of this information, we had no choice but to impose strict quarantine measures across the country. I think it was right to first try all the ways to contain the virus at the local level. I strongly disagree with the claims that we are not acting as quickly as our European partners," the British Prime Minister said in a speech to the House of Commons on Monday. During the regular session of the British Parliament, many members of Parliament and even the Conservative Party criticized Johnson for introducing a new "hard" quarantine in the country.

What does this all mean for the pound? First, that you should not "run ahead of the engine". If Barnier and Frost can reach a consensus, then it will be necessary to open champagne to all fans of the British pound. In this case, the pound can add to the price. However, its long-term prospects will continue to be extremely dim. We have already said that the negative effect of Brexit on the UK economy will be all the same, in any case. A trade deal can only smooth it out a little, make the destructive impact less weak. In general, the prospects for the pound/dollar pair in the near future and the long term depend more on the results of the US election. In the coming days, markets may be under the impression of the election process, and a little later – under the impression of their results, and a little later – under the impression of the actions of the losing side. As for the long-term prospects, there is reason to assume that under Joe Biden, the US dollar will be inclined to fall over the next four years, which naturally plays into the hands of the British pound. Otherwise, we believe that the pound will continue to fall in price in 2021, especially if Donald Trump wins the election.

Well, from a technical point of view, the situation is now extremely confusing. In the last three weeks, the pair have often been fixed above and below the moving average line. Given the strong fundamental background, such a "swing" may continue for some time. In the coming days, the market situation is unlikely to become calmer. Thus, it is recommended to trade very carefully. 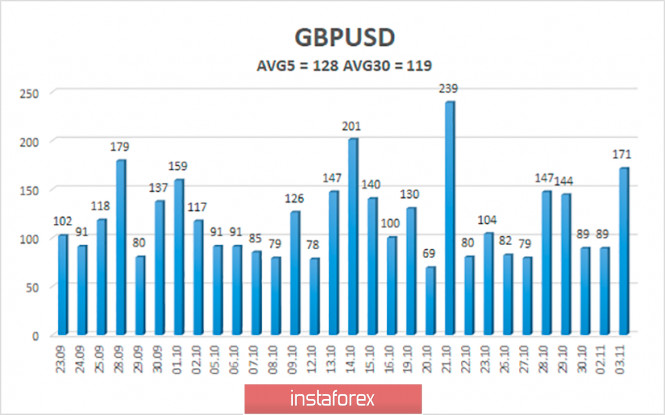 The average volatility of the GBP/USD pair is currently 128 points per day. For the pound/dollar pair, this value is "high". On Wednesday, November 4, thus, we expect movement inside the channel, limited by the levels of 1.2909 and 1.3165. The reversal of the Heiken Ashi indicator down may signal a possible resumption of the downward movement.

The GBP/USD pair started a new round of upward movement on the 4-hour timeframe. Thus, today it is recommended to keep open long positions with targets of 1.3123 and 1.3165 as long as the Heiken Ashi indicator is directed upwards. It is recommended to trade the pair down with the targets of 1.2909 and 1.2878 if the price is fixed back below the moving average line.