Overview of the GBP/USD pair. November 6. The Bank of England is expanding its QE program and preparing for negative rates 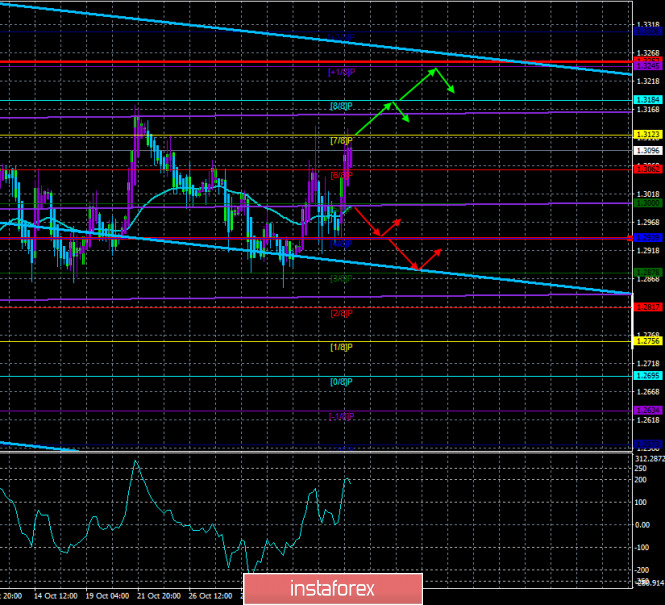 The British pound sterling paired with the US dollar also started a new round of upward movement, which was caused by the level of uncertainty that the US and the US economy are currently facing. However, as we have said many times before, the pound itself may now be under market pressure, as the fundamental background from the UK is also extremely unpleasant. Thus, the strengthening of the British currency may not be very long-term. Last time, the price bounced from the Murray level of "7/8" - 1.3123, now it has come close to it. A price rebound from this level may trigger a new round of downward movement. In principle, this is exactly the movement that has been going on for the pound for several weeks: frequent changes in the direction of movement, the frequent overcoming of the moving average. Thus, the technical picture of the GBP/USD pair remains extremely ambiguous.

The most important news of recent days for the British pound still concerns the negotiations on a trade deal between the EU and the UK. The next round of negotiations has finally ended, and the heads of the negotiating groups said again that the current progress is not enough to conclude a trade agreement. Michel Barnier said that there are still strong differences between the parties on several key issues. David Frost also confirmed his rhetoric, adding that there is still some progress. However, Britain, the British economy, and the pound do not need "some progress", they need a deal that will somehow mitigate the negative effect of the "divorce" from the European Union. And the "deal" at the moment still does not even "smell". In other words, the parties continue negotiations, which are classified, because market participants do not know in which areas progress has been made, which issues remain unresolved. Further, it is unclear how much longer they will continue. Boris Johnson said earlier that the new deadline for negotiations is November 15. However, before that, he said that the deadline is October 15. Thus, the negotiations may continue after November 15. We have repeatedly noted that London and Brussels have nothing to lose. They have a "great" prospect of trading with each other under the WTO rules, which are much less favorable than the rules of the free trade zone. Thus, from January 1, they will start trading according to the WTO rules, however, this does not mean that they will not be able to agree, for example, in February and April to start trading according to the agreement reached. It is better to trade without a deal for three months than for several decades.

Well, the Bank of England at this time began to ease monetary policy. More precisely, continued softening. This morning, the results of the next meeting of the Bank of England were summed up, at which it was decided to expand the quantitative easing program by 150 billion pounds. It should be noted that traders were waiting for an increase in the QE program by 100 billion. Thus, the Bank of England's actions were more "dovish" than expected. The discount rate remained unchanged at 0.1%. BA also updated its GDP forecasts for the coming years. The regulator now expects the British economy to fall by 11% this year and recover by 7.25% next year. The Bank of England fears a new negative impact on the economy of a repeated "lockdown", as well as a break with the EU without an agreement. As for inflation, the Bank of England said that monetary policy will not be tightened before reaching a stable level of 2.0% y/y, and this level may be reached within two years. A very optimistic forecast, from our point of view. The monetary committee also noted in a press release that it is still ready to use any available monetary policy tools to stimulate the economy and inflation. Earlier, the BA and its chief executive, Andrew Bailey, repeatedly hinted at the possible use of negative interest rates. And market participants are waiting for the introduction of these in the coming months.

Well, as for the Fed meeting, there was nothing overly important and overly interesting this time. It took place late in the evening when the European and American markets were either closed or were preparing to close. Moreover, in the first place in terms of importance for traders now are the elections, vote counting, and the political crisis in the United States, and not the next "passing" meeting of the Fed. And with the elections, the situation is extremely interesting. We have already said in the article on the euro/dollar that both Biden and Trump maintain the same chances of winning even though the Democrat is far ahead and only six votes short of winning. However, it should be recalled that in addition to the presidential elections in America, at the same time, there were also elections to the Senate and Congress. And at the moment, the Democrats and Republicans have received 48 seats in the Senate (for a majority, you need 50), and in the House of Representatives, the Democrats are still gaining 204 seats, and the Republicans - 190. However, to get a majority, you need to gain 218 seats. Thus, neither of them has a clear advantage and a clear victory yet.

As for the pound/dollar pair, it cheerfully ignored the results of the Bank of England meeting, because these results should have led to a fall in the pound. However, since it is the US dollar that is falling now, and both currencies cannot fall at the same time in this pair, today the British currency had the advantage. Market participants are still waiting for the final results of the vote in America, and are already preparing for any further events that may drive the States into a constitutional crisis. In any case, there are still a lot of extremely interesting events waiting for us before the end of the year. In addition to the American events, the issue of a trade deal between the EU and the Kingdom is still unresolved, but the point in their negotiations is not set. So we are waiting for new information on this issue. 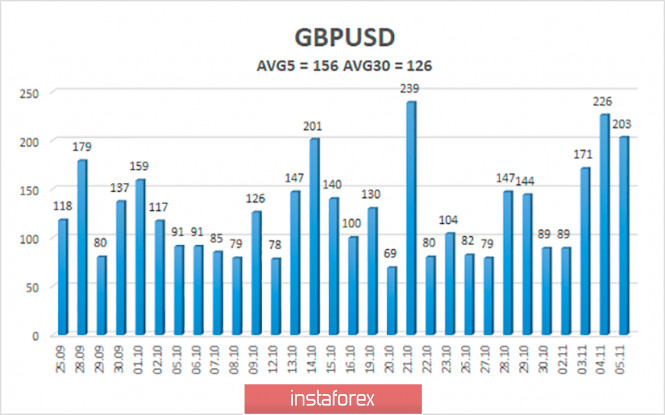 The average volatility of the GBP/USD pair is currently 156 points per day. For the pound/dollar pair, this value is "high". On Friday, November 6, thus, we expect movement inside the channel, limited by the levels of 1.2940 and 1.3252. A reversal of the Heiken Ashi indicator downwards signals a possible round of downward movement.

Interesting? Write a comment below.
 #Overview of the GBP/USD pair. November 6. The Bank of England is expanding its QE program and preparing for negative rates
Forward 
Backward 