Technical Analysis of BTC/USD for November 12, 2020

Bitcoin's hash rate has increased by around 30% in the last 24 hours, which, if maintained, suggests that there may be a major correction of difficulties soon. According to Coinwarz, the Bitcoin hash rate is now 157.5 Exahashes per second (EX / s) after a brief spike above 160 EH / s. At the time of the press release, the BTC hash rate increased by 42% in two days.

The jump follows a sharp drop in computing power at the end of October, which many analysts attribute to the end of the rainy season at the Chinese Sichuan mining center. It is estimated that the abundant and cheap hydropower in the province attracts around 80% of Chinese miners during the rainy season. In December, CoinShares estimated that Sichuan was responsible for 54% of global mining activity. The sudden increase in BTC computing power could mean that many Chinese miners have finished their migration from Sichuan and resumed operations in other local mining centers such as Xinjian and Inner Mongolia.

The BTC/USD pair keeps pushing upward and in the result bulls are getting closer to the level of $16,000. From time to time the market is consolidating the recent gains in extremely overbought market conditions and then makes another spike up. There is a potential Bullish Flag price pattern in progress on the H4 time frame chart. The intraday technical support is currently seen at the level of $15,215 and the intraday technical resistance is located at $15,526. The up trend is still being continued, so the next target for bulls is seen at the level of $16,000.

Bitcoin is trading at the yearly highs and bulls are in control of the market. The up trend continues and the next long term target for Bitcoin is seen at the level of $16,000, so any correction or local pull-back should be used to open the buy orders. This scenario is valid as long as the level of $10,000 is broken. 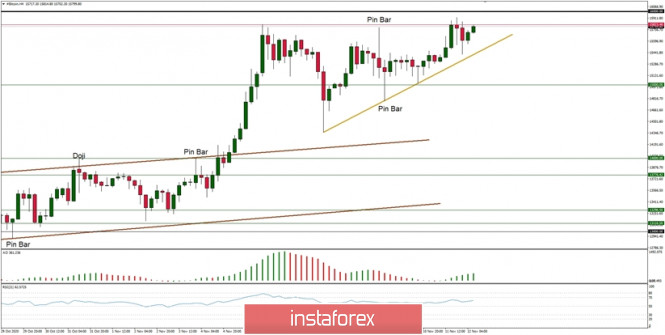