Technical Analysis of BTC/USD for November 4, 2020

Bitcoin has experienced its worst downward correction today in almost 10 years. Data from BTC.com's resource monitoring shows that Bitcoin's difficulty automatically improved by 16% on Tuesday. Estimates previously suggested the revision would be around 13%, the second highest in Bitcoin history. Earlier in 2011, there was a greater difference - 18%, which also happened at the end of October.

Difficulty adjustments occur automatically every 2016 blocks and allow Bitcoin to remain "hard" money regardless of any external factors affecting the miners. Such a reduction encourages more industry participants to compete for block subsidy rewards, with the result that the difficulty begins to increase again.

For users, this means that a downward revision will reduce fees and shorten blocking times as well as reduce the size of uncompleted transactions in the Bitcoin mempool. According to Earn.com's estimates, the optimal Bitcoin transaction fee remains high at 80,000 satoshi ($ 11).

Meanwhile, the hash rate of the Bitcoin network seemed to shift on Tuesday, and estimated weekly averages began to rise. The hash speed allows you to see how much computing power is being spent on validating Bitcoin transactions. A few weeks ago, the index was at its highest ever, but lost around 25% in the second half of October.

The BTC/USD pair has finally hit the $14k level (the exact top was made at $14,005) during the US election night, but another Pin Bar candlestick pattern was made at the this level. The market conditions are extremely overbought on H4 and daily time frame, so a pull-back or correction might occur any time now. The nearest technical support is seen at the levels of $13,296 and $13,116. The key technical support is located at $12, 625. 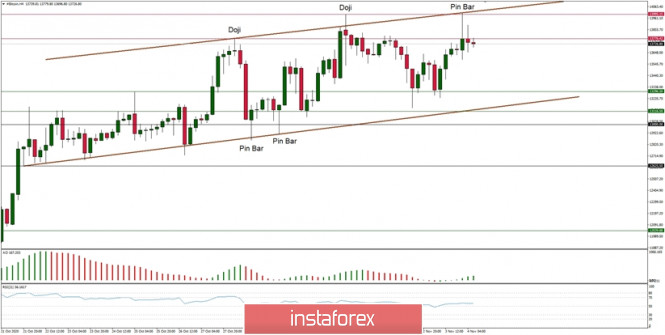