Technical Analysis of ETH/USD for November 10, 2020

The creator of Ethereum, Vitalik Buterin, sent his first ethers to the Ethereum 2.0 smart contract address. Officially, it can be announced that he will take an active part in staking and securing the network of the new version of Ethereum.

Buterin's "VB2" address sent 100 transactions of 32 ethers each, for a total of 3,200 units of cryptocurrency, according to a TrustedNodes report. At the time of the press release, this amount is worth approximately $ 1.4 million. The transactions were sent to the newly launched and escrow Ethereum 2.0 smart contract, which was launched as a tool for network participants to transfer funds from the current proof-of-work blockchain to the soon-to-be-launched proof-of-stake (PoS) blockchain. In order to take an active part in securing the new Ethereum network, a minimum of 32 ethers must be deposited.

The smart escrow contract currently holds 44,741 ETH worth approximately $ 20 million. In order for Ethereum 2.0 to officially take off, one of the conditions must be met, which is that 16,384 validators must deposit funds corresponding to 524,288 ETH in the smart contract, which at the time of publication would be worth around $ 230 million.

The ETH/USD pair has been seen hoveing inside of a narrow range and it is possible the market is developing the Bullish Flag pattern. The level of $424.65 will now provide the intraday support and the level of $400 will now act as a key technical support. The next target for bulls is seen at the swing high at $466.36. Only if a daily candle closes below $360 level, then the bears will have full control of the market. 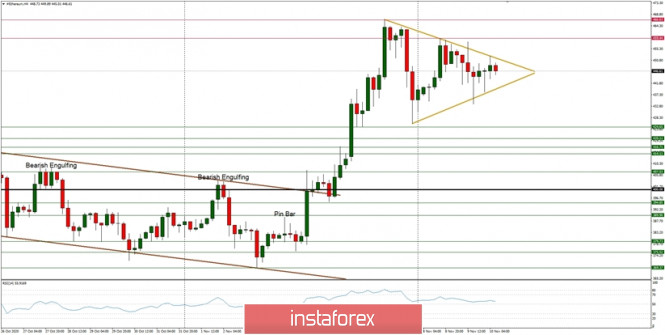