Technical Analysis of ETH/USD for November 12, 2020

The KuCoin cryptocurrency exchange recovered most of its funds from the $ 280 million lost in September in a hacking incident.

Johnny Lyu, KuCoin's co-founder and CEO, announced on November 11 that the stock market had recovered 84% of the stolen assets. Lyu said the recovery process included "chain tracking, updating contracts, and judicial collection." He also noted that the exchange will publish more details on the refund after the case is closed.

When posting the news on Twitter, Lyu did not provide the exact amount of assets lost as a result of the hacking incident. KuCoin initially estimated user losses at $ 150 million, while crypto analytics company Chainalysis estimated losses at $ 275 million.

Lyu previously said the breach had an impact on hot wallets that contain Bitcoin, Ether, and ERC-20 tokens. A large number of stolen ERC-20 tokens were then frozen by major crypto projects to prevent withdrawals. In early October, Lyu announced that KuCoin executives had managed to find burglary suspects with "substantial evidence".

The ETH/USD pair has hit the level of $475.58 after the triangle breakout, so the bullish pressure is still present. Nevertheless, the price got back to the old supply zone quickly and now is consolidating inside of this zone. The level of $424.65 will now provide the intraday support and the level of $400 will now act as a key technical support. The next target for bulls is seen at the swing high at $466.36 and then $500. Only if a daily candle closes below $360 level, then the bears will have full control of the market. 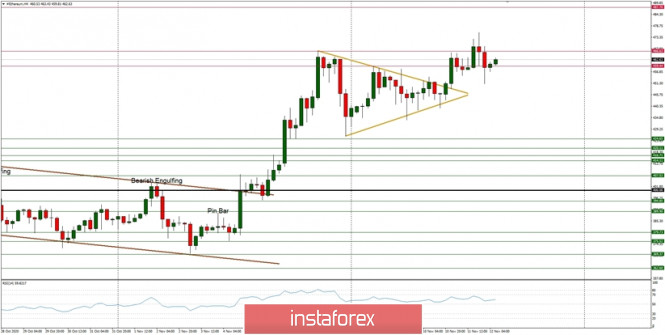