Technical Analysis of ETH/USD for November 9, 2020

The COVID-19 pandemic has served both as a screening of existing weaknesses in the global financial system and as an accelerator of destabilizing trends, including rising sovereign and consumer debt in emerging markets. At the Central Bank's Club of Governors' online meeting hosted this week by Bank of Russia governor Elvira Nabiullina, representatives were unanimous in anticipation of the far-reaching consequences of the current crisis.

At the meeting, 26 central bank representatives gathered from Central Asia, the Black Sea region, the Balkan countries and beyond, also highlighted the pandemic-induced expansion of e-commerce as well as digital settlement technologies. From a central bank perspective, these trends are prompting financial regulators to take CBDCs more seriously than ever before.

At the next meeting of the Club of Central Bank Governors, hosted by the deputy governor of the Bank of Russia Alexei Zabotkin, representatives discussed the increased productivity of financial regulators on the CBDC front during the pandemic.

As summarized in the specifications of the Bank of Russia meeting, participants agreed on the need to assess the potential impact of CBDC on monetary policy and financial stability of countries, as well as the evolution of cyber-threat mitigation procedures.

The meeting reportedly convened not only central bankers from the CIS, Israel and China, but also representatives of the International Monetary Fund and the World Economic Forum, as well as the Bank for International Settlements.

The latter has both participated in and developed detailed analyzes of global CBDC development; for its part, the IMF has worked with a number of central banks on their joint CBDC studies, while the WEF has recently focused on developing the CBDC framework from a transnational governance perspective.

The ETH/USD pair has made a pull-back towards the level of $425.99, but the market bounced back quickly and keeps trading above the short-term trend line support. The level of $424.65 will now provide the intraday support and the level of $400 will now act as a key technical support. The next target for bulls is seen at the swing high at $466.36. Only if a daily candle closes below $360 level, then the bears will have full control of the market. 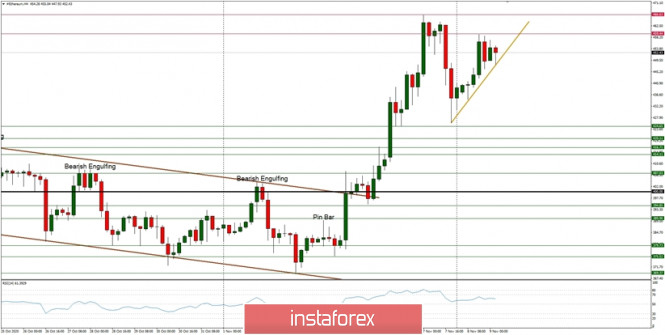