Today is a very important day of the year. Overview of USD, NZD, AUD

The sale of risky assets, together with a clear growth in the US yield bonds stopped last night, while stock indices partially recovered their loss. Therefore, transitioning to the green zone most likely indicates that players' confidence is rising that Joe Biden will win the US presidential elections. Trump, in turn, who began to win back its loss in the middle of last week (which was particularly due to the demand for defensive assets), will not have time to close the gap.

For the economies of Australian and New Zealand, these are unusual moments. As the second wave of COVID-19 is gaining impulse in the Northern hemisphere, forcing countries to tighten their restrictive measures, summer is approaching in the Southern hemisphere. We are aware that summer is accompanied by a sharp decline in the number of COVID-19 cases. As a result, business activity in New Zealand and Australia is likely to recover and return to normal, which should be accompanied by both an increase in domestic demand and a reduction in the need to introduce new incentives. It is no coincidence that the RBNZ postponed consideration of the issue of negative rates and QE expansion for April just before the onset of winter.

Unfortunately, both Australia and New Zealand are export-oriented countries, so the growth in business activity may well not provide the necessary impulse for economic growth due to the sharply reduced external demand, which is largely determined by the demand in the US and Western Europe. Inflation is well below the target across the board, and as the pandemic widens, there is little hope of rising consumer demand. 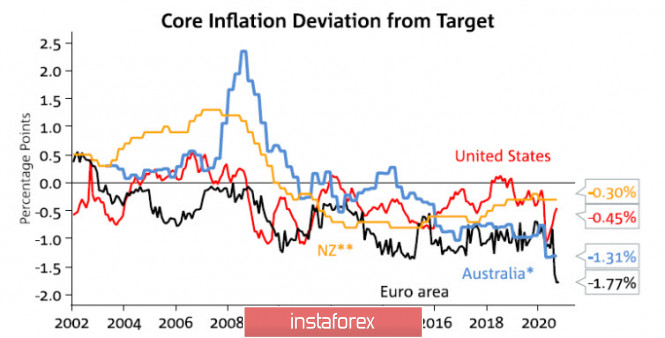 Today, we expect the trend which developed last night will continue – attempts to resume oil growth, the sale of protective assets and the demand for risk. According to forecasts, Democrats can gain control of the Senate, which is highly likely to end the trade wars that Trump has waged over the past few years. Thus, markets regard this prospect as positive.

The New Zealand dollar is trading in a range with no clear direction. A week ago, the priority seemed to be leaving the range up, but since Monday, the estimated price has turned down even despite a number of positive signals (CME net long position rose by 35 million to 469 million), remaining above the long-term average, which reduces the chances of resuming growth. 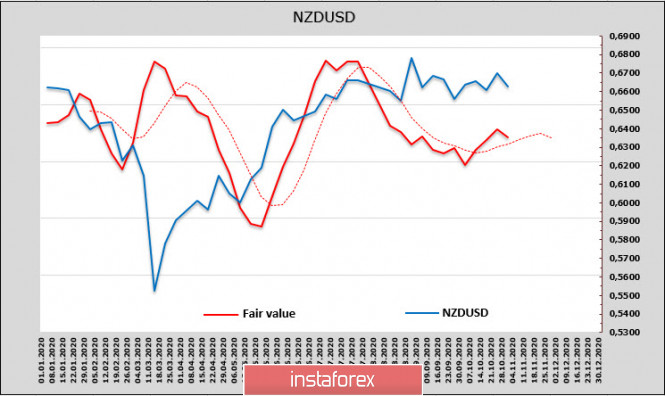 New Zealand's economic state looks clear for the majority of banks actively operating in the country – it is expected that the RBNZ will reduce the rate to negative levels in April, but before that, it will most likely announce this month that there will be an expansion of its lending program aimed at supporting business activity amid falling external demand. The RBNZ meeting will be held on November 11, and the results of the US elections will be known by that time, so the current given forecast is very uncertain.

The NZD still looks better compared to AUD, and its momentum is directed below. On the other hand, the NZD/USD pair remains in a narrow range while it awaits the result of the US election. If Democrats win, the price will consolidate above the level of 0.6720, with a goal at 0.6930/50. Any other result will cause the New Zealand dollar to decline to 0.6480 and strengthen the US currency.

The Australian dollar's net long position reached 634 million, as it rose by 158 million over the week. However, this bullish signal does not have much effect on the AUD prospects, since the situation remained neutral or with a slight negative advantage by other criteria. The target price is below the long-term average and tends to decline further. Therefore, we have low chances to continue rising. 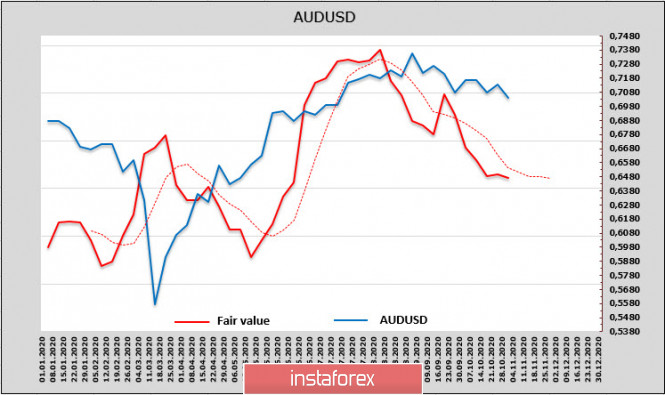 An RBA meeting will be held tomorrow, and so, most experts expect the rate to be cut to 0.10% and some targets to be lowered. Perhaps, the RBA will announce the start of targeted asset purchases. These expectations currently dominate the expert community and put additional pressure on the AUD.

Technically, AUD/USD remains within the limits of the descending channel. The target is 0.6775/95, as long as capital flows support the downward trend of AUD, despite Democrat's likely victory.