Trading plan for GBP/USD for November 9-13. New COT report. Traders ignored the Bank of England meeting and failure of Brexit 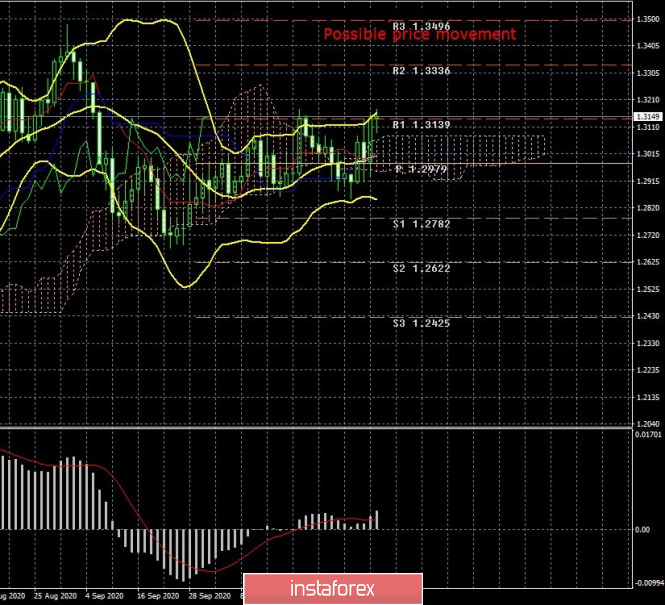 The GBP/USD pair was also trading up last week. However, it is still not as pronounced as the EUR/USD pair. The pound sterling has risen in price by 240 points last week, which is about the same as what the euro gained. Considering that the volatility of the pound has always been higher, it has risen in price slightly less than the euro. However, the overall technical picture is very similar to the EUR/USD picture. In the past few weeks, the pound/dollar has also been moving in a channel very much like a sideways one. However, it is impossible to say that there is a flat for the pound. For the second time, traders managed to gain a foothold above the Ichimoku cloud, as well as overcome the important Kijun-sen and Senkou Span B lines. Thus, the technical prospects open up quite well for the bulls. However, take note of the fact that the pair's growth from last week was purely fundamental, and the foundation in the UK is much worse than the American one. Therefore, we expect the British pound to continue falling next week. 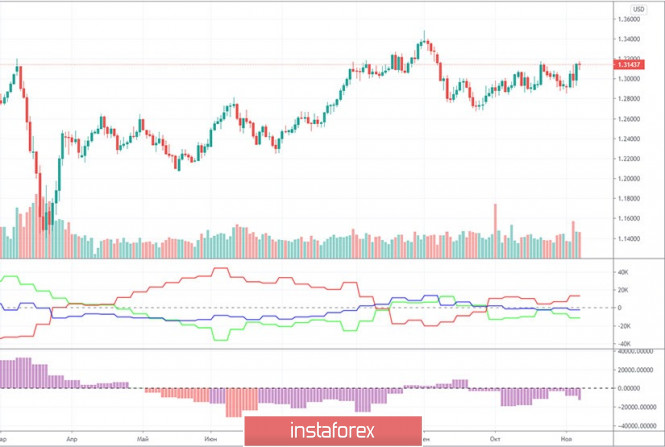 The GBP/USD pair fell by only 100 points last reporting week (October 27-November 2). The pound started growing after November 2. And it was more like the dollar fell than the pound rising. However, let's go back to the reporting period. Non-commercial traders closed 3,281 Buy-contracts (longs) and opened 1,146 Sell-contracts (shorts). Thus, the net position for the non-commercial group of traders decreased by 4,500. This point is much more clearly visible on the first indicator's chart. The green and red lines that represent the net positions of the two most important groups of traders began to diverge again. Thus, the mood of professional traders is becoming more bearish again. However, this change did not cause the pound to fall. Because the US election was held on November 3, and since then the dollar has only been getting cheaper. Therefore, the new Commitment of Traders (COT) report may show that the bearish sentiment has been weakening among professional traders. However, in any case, we believe that markets need to calm down and only then will it be possible to look at all the information in a new way. Now it is clear that market participants are in a very excited state due to the current political chaos in the United States. Therefore, the mood of large traders can change quickly and dramatically.

The fundamental background for the GBP/USD pair was extremely important and interesting last week. Although traders brushed off a lot of information. For example, it turns out that the next round of Brexit talks, if not failed, did not bring the desired result. This time, the negotiating groups of Michel Barnier and David Frost worked on the agreement for almost two weeks, but after the end of the next round, they reiterated that serious differences remained on the most key issues. In addition, the Bank of England held a meeting and they decided to ease monetary policy by increasing the quantitative stimulus program by 150 billion pounds. Recall that all the central bank's actions aimed at stimulating the economy are considered dovish and do not support the national currency. However, in our case, the pound continued to rise in price despite all the events listed above. Now traders are waiting for the final failure in the negotiations, as well as the introduction of negative rates by the Bank of England. Well, the UK economy is likely to continue to contract. Both in 2020 and 2021. Do not forget that a second quarantine has been introduced in Great Britain. And it will inevitably affect the economy. But as we said, traders ignored all this and only focused their attention on the US elections. Now their mood will primarily depend on the political crisis in the United States and the actions that Biden and Trump will take. The more the threat of a constitutional crisis grows, the more chances that the dollar will continue to fall. But we still expect the British currency to fall in the long term.

1) Buyers have a chance to form an upward trend. However, we believe that the pair's growth from last week was somewhat accidental or, better to say, purely fundamental. Therefore, we have serious doubts about it moving upward. However, as long as the technical picture does not signal the opposite, you can consider the option of trading up while aiming for 1.3336 as the main one.

2) Sellers lost the initiative because of the US presidential elections. Now they need to return the pair below the Ichimoku cloud in order to rely on forming a downward trend in the long term. We are still inclined to believe that the pound would fall and will be quite strong. But this hypothesis, like any other, needs technical confirmation.