US election will influence the dollar's direction. Overview of USD, EUR, GBP

The consolidated short position on the dollar declined again – by 887 million to -27.066 billion this time. The preponderance of short positions is still significant, but the trend is clear. 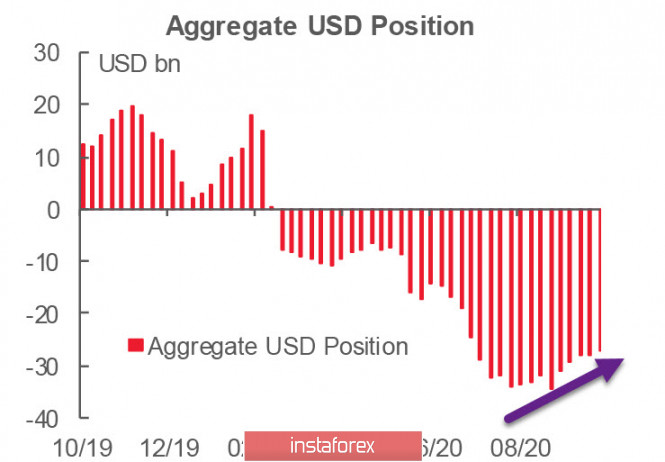 If we look at the detailed report, it does not give grounds for categorical statements about the dollar's strong growth. The dynamics are in its favor, but it was reached due to the total positions for the euro and the pound. The dollar, in turn, does not have any advantage for the rest of the range of currencies. For commodity currencies, slight changes are observed, but it is significant that both CAD, NZD, and AUD were bought, not sold. This consensus clearly contradicts the strong decline of oil and indicates that high uncertainty about the results of the US election forces to change their forecasts on the way.

As for the elections, forecast patterns point to a landslide victory for Biden, despite Trump's victory in the last debate. Any result that is not challenged by the losing side will lead to a pullback in the stock market and a temporary weakening of the dollar. In contrast, challenging the results is currently the strongest market fear that will help the dollar strengthen.

Futures and options on the euro continue to sell off and the net long position is rapidly declining. Moreover, it declined by 1.586 billion to 22.937 billion during the reporting week. The estimated fair price also continues to decline. 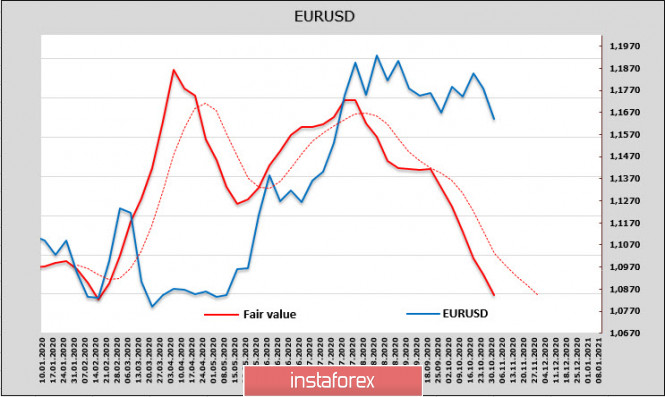 The ECB has significantly narrowed the space for speculation, informing markets as effectively as possible that it expects to expand easing at the December meeting. In fact, this is exactly what the markets expected, so the decline in the Euro on Thursday and Friday is quite understandable.

At a press conference, Lagarde said that the economic recovery has lost momentum, and explained that various ECB committees are already working to explore the potential for mitigating the effects of various ECB instruments. In addition, the ECB will not stand by when the second wave of the pandemic unfolds, and even if the Central Bank's monetary policy is ineffective under quarantine, new incentives will be very useful after the economy starts.

November is expected to be the worst month. GDP may go into a negative zone, risks will increase, and updated forecasts will be worse than in September. It is obvious that the labor market recovery may stop, and inflation may slow down to zero, such a risk is now considered high.

There is no reason to expect EUR/USD to reverse upwards due to a combination of factors. A breakdown of the channel has taken place. At the same time, the decline is held back by the only strong resistance at the level of 1.1612, so a decline to 1.15 is likely, after which attempts to form a base may begin.

The pound's total position declined by 381 million to +543 million. The advantage is only small, but the pound never managed to gain positivity, which means that there are no factors that could support the upward trend. The estimated price is significantly lower than the current one, but there is no direction, and the uncertainty is high. 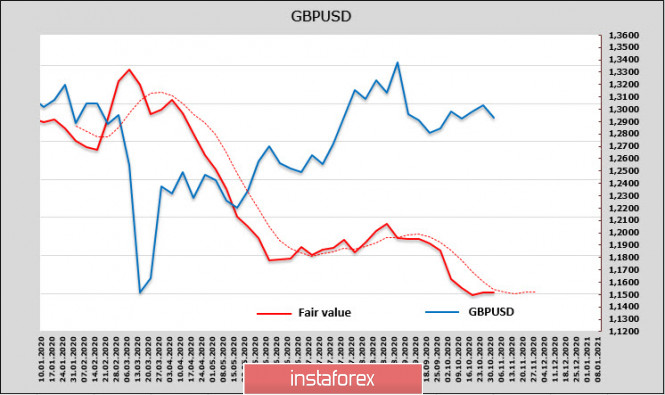 As expected, the UK economy is going into quarantine, which will lead to a decline in GDP and a drop in demand for the pound. In September, the Bank of England recorded a decline in consumer lending instead of the forecasted growth. Moreover, the British Retail Consortium confirmed the fall in retail prices, so we should expect a drop in inflation expectations and a slowdown in budget revenues.

On another note, Brexit negotiations are at an impasse. Apparently, Johnson's Cabinet is waiting for the results of the US elections, but a day without activity increases the probability of an exit without a deal, which negatively affects the pound's prospects. The Bank of England held a meeting on November 5, from which a rate cut is not expected; however, the prospects for seeing a negative value will most likely be confirmed this year.

The large gap between the current and estimated prices for the pound puts a lot of pressure on it. Another downward wave is forming, support for 1.2670 is under threat, and its fall will stimulate the pound's decline. Nevertheless, a decline is unlikely before the US election.