The Japanese currency is actively getting cheaper throughout the market. In a pair with the dollar, the yen weakened by almost 250 points in just a few hours. Similar dynamics can be seen in the main cross-pairs. For example, in a pair with the European currency, the Japanese fell by almost 300 points and in a pair with the Australian dollar it is more than 200 points. In fairness, it should be noted that other defensive instruments, in particular, gold and the franc, were actively losing their positions. But the yen showed the strongest volatility reacting to news from the "coronavirus front". The USD/JPY pair in the first half of today updated the 8-month price lo, falling to 103.20 and in the second half of the day – updated the almost three-week high jumping to the middle of the 105th figure. And judging by the mood of investors, buyers of USD/JPY will soon head to the area of the 106th price level, opening up new horizons for themselves.

The fact is that Pfizer pharmacologists have taken a serious step in the fight against the coronavirus pandemic. Pharmacology news today overshadowed the us election which set the tone for trading over the past week. 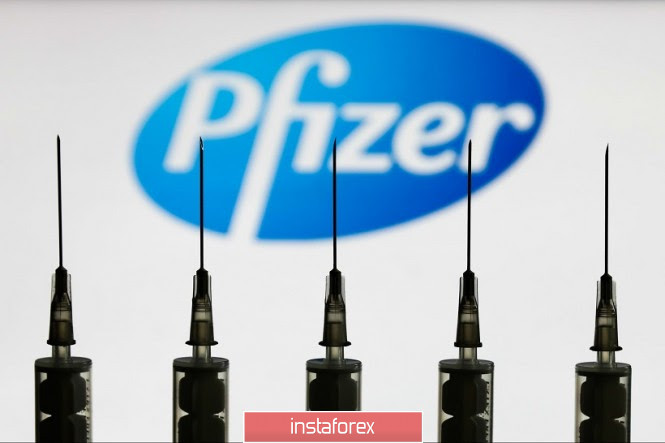 So, the pharmaceutical companies Pfizer and BioNTech, which are working together to develop a vaccine against coronavirus reported the success of the third phase of clinical trials of the drug today: studies have shown 90 percent effectiveness. Almost 44 thousand people in six countries of the world took part in the tests. In subjects who received the drug, COVID-19 occurred 90% less often than in those who were given a placebo. Registration of the vaccine is expected in November, while the company is now collecting additional data on its safety. The performance data itself has not yet been published in a peer-reviewed journal but only in the form of a press release. Nevertheless, the news literally "blew up" the markets. It is known that Pfizer and BioNTech have signed a deal with the United States to supply at least 100 million doses of the vaccine in the amount of 1 billion 950 million dollars. At the same time, representatives of these companies have previously stated that hypothetically they will be able to produce an additional 50 million doses and this is only within the current year. And by the end of 2021, Pfizer intends to produce more than 1.5 billion doses of the drug.

Why did this news cause such a stir in the markets? First, creating and distributing a vaccine is seen as the best and most reliable way to get rid of quarantine restrictions. Second, Pfizer pharmacologists were the first to "show off" such impressive results at the last stage of testing (although about a dozen vaccines are currently in the so-called "third phase"). Third, Pfizer used a completely experimental approach that involves injecting part of the virus's genetic code to "train" the immune system. And fourthly, traders finally saw a hope against the background of a record increase in the incidence of diseases not only in Europe, but also around the world (including in the United States). Representatives of Pfizer and BioNTech called their breakthrough in the development of the vaccine "a turning point in the fight against Covid-19".

A major victory in the fight against the virus has revived hopes for a rapid recovery in the global economy. The market's focus has rapidly shifted from the US election to the vaccine. Against this background, such protective instruments as gold and the franc collapsed throughout the market.

It is quite difficult to talk about the medium – term prospects of the dollar in a pair with the Euro or the pound - EUR/USD and GBP/USD bears showed a rather restrained reaction today. But the USD/JPY pair is likely to continue its upward trend. However, after such impulsive movements, as a rule, there is a corrective pullback, so at the moment you should not rush to buy. But in the medium term, the pair will still test the main resistance level of 106.00 (this is the upper line of the Bollinger Bands indicator on the daily chart). Therefore, a corrective decline in the price which is likely to follow during the Asian session on Tuesday can be considered as a reason to open long positions to the above target.