Worst possible scenario in the US election. Overview of USD, EUR, GBP

The US Federal Reserve refrained from any action at the end of the meeting. Most comments on the results of the meeting come down to the fact that they do not want to change anything in the current situation until there is a clearer political outlook. Nevertheless, economic indicators are quite confident, despite the rising cases of COVID-19. Here, the Fed has the ability to buy assets worth at least $ 80 billion a month, balances in the accounts of the Treasury, which lowered its emission targets earlier this week just because of the overall increase in the current account. If the political impasse drags on and Congress does not approve a new economic aid package, then the Fed will return to the issue of new incentives, which is expected to happen in December.

The political situation became more complicated on the third day after the elections. US President Donald Trump, during a press conference at the White House, announced that he won the elections when counting "legal votes." It's not hard to see what Trump means if you look at FOX news' county voting map. So, are we dealing with a color revolution in the United States? 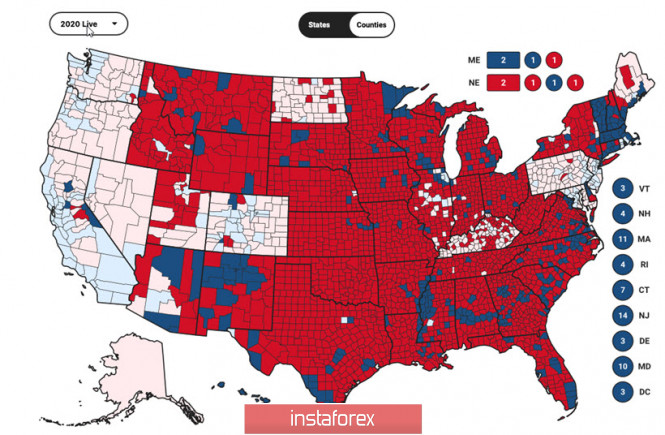 Thus, neither of the two political parties gained an advantage. Both presidential candidates refuse to admit defeat, so there is a high probability that the mechanisms provided for by the legislation to break the political dilemma will not work, which will lead to anarchy.

We are in the early phase of the largest political crisis in US history since the Civil War. The markets traded a day ago, considering that Biden won the presidency and the Republican led the Senate. This order is expected to lead to fewer tax changes, which pleases the markets. However, everything changed again this morning. Oil is losing more than 2%, which is a sign of a high probability of a "blue wave" scenario, that is, a sign of a Democratic majority in the Senate. At the same time, bond yields have sharply declined, which indicates increased risks. It is also significant that the Shanghai Composite has gone into a negative zone, and it is China that is considered to be more interested in Biden and the Democrats in general, since this will stop the trade war with the US.

The second wave of COVID-19 spread in Europe, and thus, restrictions on economic activity are tightened. Despite the fact that GDP growth rebounded in the third quarter quite sharply, business activity indicators began to lose impulse. In view of this, retail sales went into negative zone in September, inflation was negative, and the dynamics of consumer activity indicated the approaching recession. 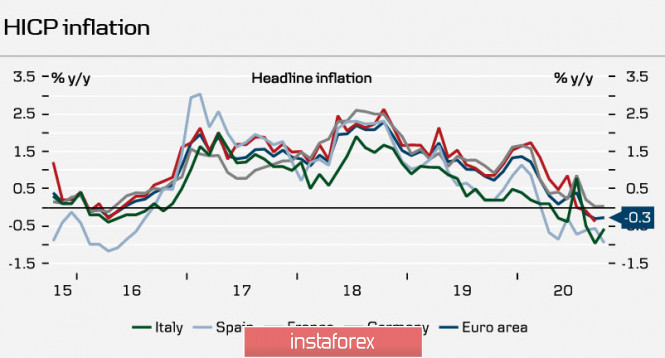 If we look at the worsening economic outlook, the ECB has temporarily announced additional stimulus, but details will be revealed during the December meeting. We can assume that the PEP program will be extended, but a rate cut in the negative zone still looks unlikely.

At the same time, the EUR/USD upward pullback amid high probability of Biden's victory was not so strong. Technically, the local top 1.1860 is below the previous 1.1881, which means that a downward impulse is very likely. The movement will exactly correspond to the news from the pre-election front: either a breakdown of 1.1882 and then a test of 1.20, or a pullback to 1.16, with a goal of 1.15. From an economic point of view, the EUR/USD decline is certainly more justified.

The market was slightly surprised by the Bank of England, which increased its asset repurchase program by £150 billion, and not the forecasted £100 billion. The Bank of England currently predicts that the UK economy will sink by 2% in the fourth quarter, but assumes that a trade agreement between the EU and the UK will still be signed, although the EU is pessimistic.

On another note, negative rates were not mentioned in the minutes or the accompanying statements of Cabinet members. Therefore, the pound failed to gain strong impulse and will fluctuate synchronously with other currencies, monitoring the situation in the United States. The local high of 1.3474 held. The alignment is the same as for the Euro. This currency will rise if Mr. Trump admits defeat and will decline if the winner moves into the Judicial court.