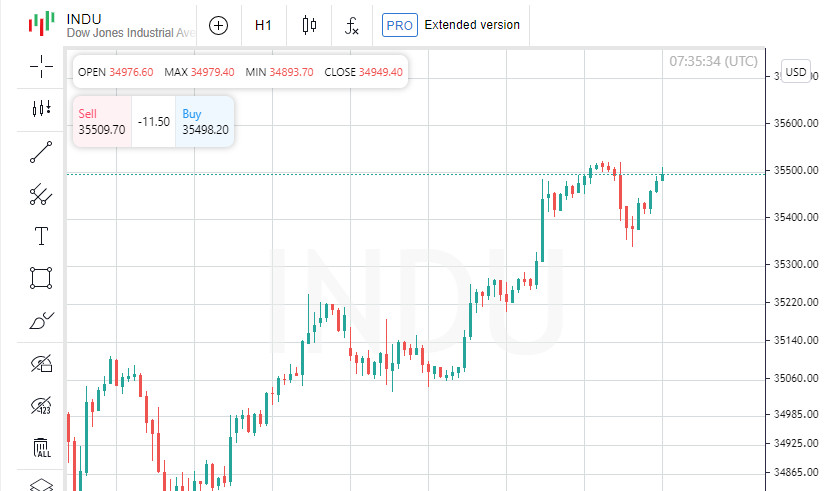 EBay Inc. yesterday rose 1.3%. The world's largest online auction in the second quarter of this year received profit and revenue above analysts' expectations, but reported a decrease in the number of active buyers, while the revenue forecast for the current quarter did not meet the expectations of experts.

The price of securities of the American Palantir Technologies Inc. jumped 11.4%. The big data solution provider increased its revenue by 49% in the second quarter of 2021, thanks to a significant increase in revenue from commercial orders in the United States.

Nio Inc. shares quoted in the USA. decreased by 3.4%. The Chinese electric vehicle maker cut its net loss by 45.4% in the second quarter, while the adjusted figure was better than forecast.

Investors are studying the statistics, trying to understand how they will affect the plans of the Federal Reserve System (FRS) to roll back asset repurchases.

The number of Americans applying for unemployment benefits for the first time last week decreased by 12 thousand and amounted to 375 thousand, according to a report from the US Department of Labor. This is the lowest level since the end of June. According to the revised data, a week earlier the number of requests was 387 thousand, and not 385 thousand, as previously reported. Analysts on average expected a decline to 375 thousand from the previously announced level of the previous week.

Meanwhile, US producer prices (PPI) jumped 7.8% in July from the same month a year earlier, according to data from the country's Labor Department. These are the highest growth rates since the beginning of the calculation of the indicator in November 2010. Analysts on average predicted a less significant rise of 7.3%.

Compared to June this year, the PPI index rose by 1%. The consensus forecast of experts assumed an increase of 0.6%.

In recent months, representatives of the Federal Reserve are increasingly speaking out in favor of the regulator beginning to roll back stimulus measures introduced to support the economy amid the coronavirus pandemic.

Federal Reserve Bank (FRB) Kansas City President Esther George believes that the Fed has made sufficient progress in realizing its goals to accelerate economic growth and employment to complete the program of monthly buybacks of Treasuries and mortgage-backed securities worth $ 120 billion. Business Economics Association George added that a recovery is underway and should be followed by a shift from extraordinary monetary policy to more neutral

The US Central Bank may begin to roll back stimulus measures for the US economy by the end of this year, given the strength of the economic recovery, said the head of the Federal Reserve Bank (FRB) of San Francisco, Mary Daly.

In an interview with the Financial Times, Daily expressed confidence that the significant growth in economic activity of households and businesses will continue as people return to jobs and persist in high consumer spending, which will create conditions for adjusting monetary policy in the coming months.