Analysis and trading recommendations for GBP/USD on August 27

There were no market signals in GBP / USD on Thursday so the day passed by quite calmly. But the lack of macro statistics resulted in a slight pressure on bullish traders, which slowly but surely pushed the pair to 1.3690.

A similar scenario is expected to occur today as there are still no important macro statistics scheduled to be released. But bullish traders may try to get ahold of the market, which, in turn, will lead to a small upward correction. Then, in the afternoon, US will release data on income and expenses, but the whole emphasis will remain on the speech of Fed Chairman Jerome Powell at the Jackson Hole symposium. Powell is expected to outline clearer prospects on the support measures and bond purchase program, which could strengthen dollar and weaken pound. But if he doesn't, demand for GBP / USD may return and the pair will again test the weekly highs.

Open a long position when pound reaches 1.3715 (green line on the chart), and then take profit at the level of 1.3767 (thicker green line on the chart). GBP / USD will climb up if bullish traders successfully take control of the market. But before buying, make sure that the MACD line is above zero, or is starting to rise from it.

Open a short position when pound reaches 1.3674 (red line on the chart), and then take profit at the level of 1.3621. A decline will occur if the Fed indicates potential changes in the monetary policy. But before selling, make sure that the MACD line is below zero, or is starting to move down from it. 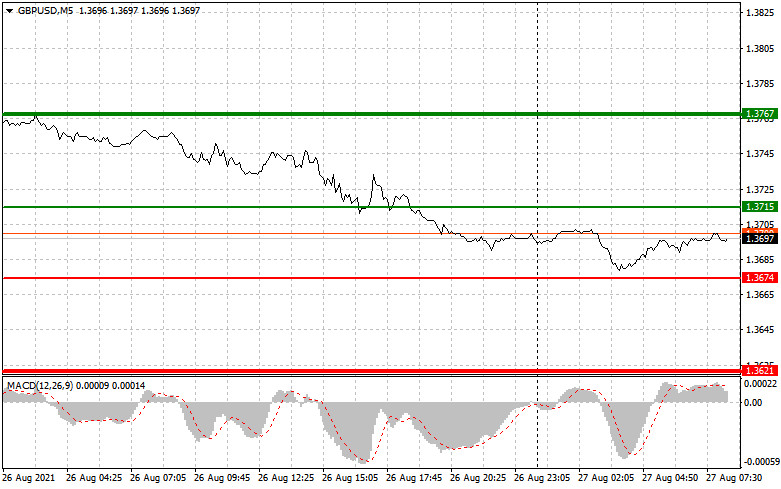