Analysis of EUR/USD. August 5. An absolute anti-record for market activity has been set! 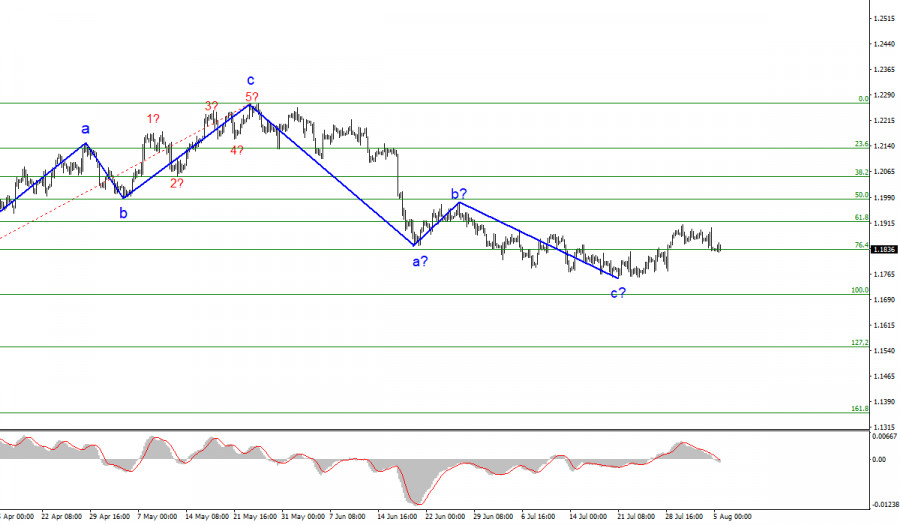 At the moment, the wave counting on the 4-hour chart for the euro/dollar instrument looks quite clear and unambiguous, and at the same time does not change at all over time. This is because the instrument continues to move with low immensity. In the past few days, quotes have been moving away from the highs reached, but it is extremely weak. The entire section of the trend, starting on July 21, looks like an independent wave, which may be the first in a new upward trend section. Thus, at the moment, the assumed wave c and the entire downward trend segment are considered completed. If this assumption is correct, then the increase in quotes will resume with targets located near the 20 figure and the level of 1.2065, which corresponds to 50.0% and 38.2% Fibonacci. The ultimate targets of the entire upward trend are located near the highs of the past upward trend. However, given the current magnitude of the instrument, it can move to its targets for several months. I am not considering the option with the complication of the downtrend part of the trend.

On Thursday, the news background for the euro/dollar instrument weakened again. Yesterday the markets reacted with pleasure both to the economic reports and to the speech of the vice-president of the Federal Reserve Richard Clarida, due to which the instrument was clearly not standing in one place during the day. Today, from low to peak at the time of writing this review, the instrument has passed 29 basis points. I don't even remember the last time I saw such a low value of market activity. The news background today is, of course, extremely weak. One can only pay attention to the report on claims for unemployment benefits in the US, but even its significance does not give the markets a reason to trade more actively.

Thus, today can be considered complete, and the markets can fully focus on tomorrow and the reports that will be released. And on Friday there will be something to pay attention to. At least two reports deserve close scrutiny: Nonfarm Payrolls and the unemployment rate. Moreover, the second may not be taken into account by the markets, since all the attention may go to the Nonfarm Payrolls report. Markets expect about 900,000 new jobs outside the agricultural sector. If this figure is exceeded, then the US dollar can expect to rise. However, I do not believe that such a high forecast will be exceeded. Most likely, the actual value will be lower, and the markets will be a little disappointed and reduce the demand for the US currency. It will be quite logical from the wave point of view.

Based on the analysis, I conclude that the construction of the descending wave c is completed. Thus, as I said earlier, it is now possible to buy the instrument with targets located near the nearest Fibonacci levels. These levels are 1.1919 and 1.1983, which corresponds to 61.8% and 50.0% Fibonacci. I recommend buying for each new MACD signal "up". An unsuccessful attempt to break through the 76.4% Fibonacci level indirectly indicates that the markets are not ready for new short positions. 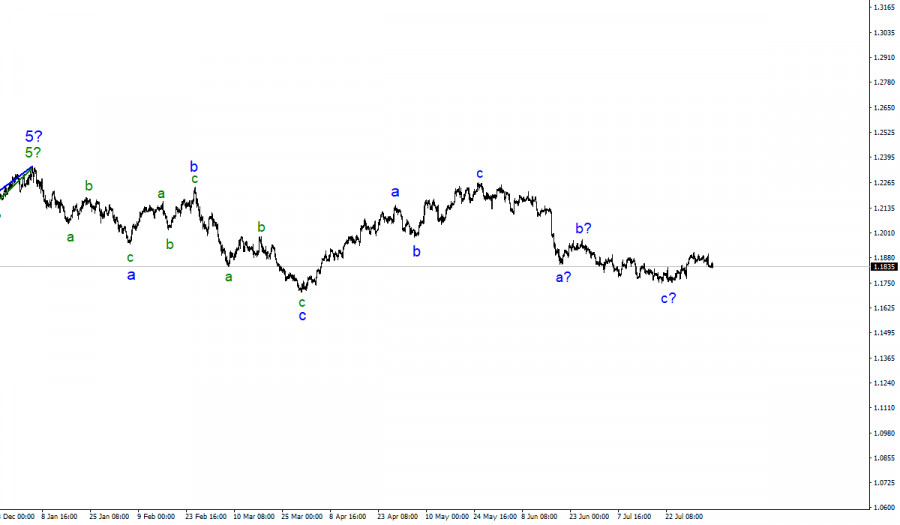 The wave marking of the higher scale looks quite convincing. We see three three-wave sections of the trend, which are approximately the same in size. This gives reason to assume that the last downward trend section is complete. If this is true, then we can expect an increase in the quotes of the instrument in the coming weeks by 200-300 basis points.

Interesting? Write a comment below.
 Analysis of EUR/USD. August 5. An absolute anti-record for market activity has been set!
Forward 
Backward 