Analysis of GBP/USD. August 18. Inflation in the UK has fallen to 2.0% 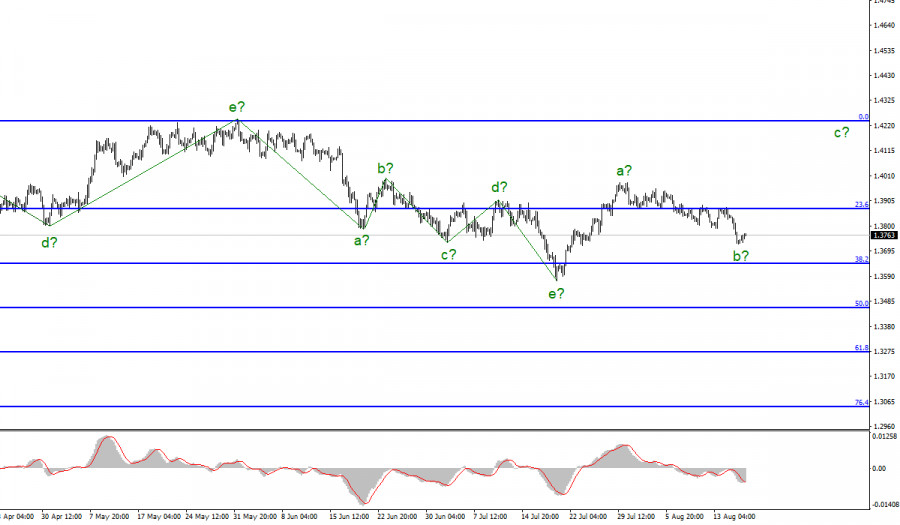 For the pound/dollar instrument, the wave counting at this time still looks quite clear, but, unfortunately, it is starting to get confusing. A couple of weeks ago, everything looked quite convincing: an impulse wave a was built, after which a corrective wave was built, presumably b, as part of an upward trend. However, at the moment, the construction of wave b has not yet been completed, and the wave itself has taken on a very extended form, which casts doubt on the resumption of the rise in the instrument's quotes in the near future. And it certainly casts doubt on the assumption that the new uptrend segment is impulsive. Now the wave counting looks like another corrective part of the trend, which may take a three-wave form. And the supposed wave b may well correspond in size to wave a. That is, equal to 90-100% of its length. If you look at all the wave structures over the past six months, their distinctive feature is rather deep corrective waves. In addition, all these structures are corrective, so it is very difficult to expect the instrument to go beyond the range of 1.3600-1.4240. However, while I am still waiting for the decline to end and the construction of a new upward wave, presumably with.

The pound/dollar rose 30 basis points during Wednesday. Thus, the magnitude of the instrument on August 18 is about 15 points. We see about the same for the euro/dollar instrument. And this is despite the fact that quite important inflation reports were released in the UK and the European Union today. If in the EU the report was rather boring, as its value fully corresponded to the expectations of the market, then the British report came as a surprise. The consumer price index in July reached 2.0% on an annualized basis, although in June it was equal to 2.5% y/y, and the markets expected it to slow down to 2.3%. However, inflation slowed down very sharply in July, and this is bad for the British economy.

Let me remind you that in recent weeks and even months, the Bank of England has been discussing the issue of reducing the asset purchase program, an analogue of the QE program in the United States. Bank of America, the IMF made forecasts that inflation in the UK by the end of the year will be at least 3%, and most likely 4%. This was the opinion of Andy Haldane, chief economist at the Bank of England, who has already left office but has consistently voted in favor of cutting the stimulus program in the last two meetings. If inflation began to fall as early as July, this could mean that the British economy is starting to slow down, which means there is no reason to end the asset purchase program. In this case, the tightening of monetary policy may occur much later.

The wave pattern is now more or less clear. I continue to count on the construction of a new upward wave, so at this time I propose to consider buying the instrument for each MACD signal "up" with targets located around 1.4240, which corresponds to 0.0% Fibonacci. The instrument is still in the stage of building a correctional wave 2 or b and its construction is clearly being delayed, which may negatively affect the integrity of the current wave counting. 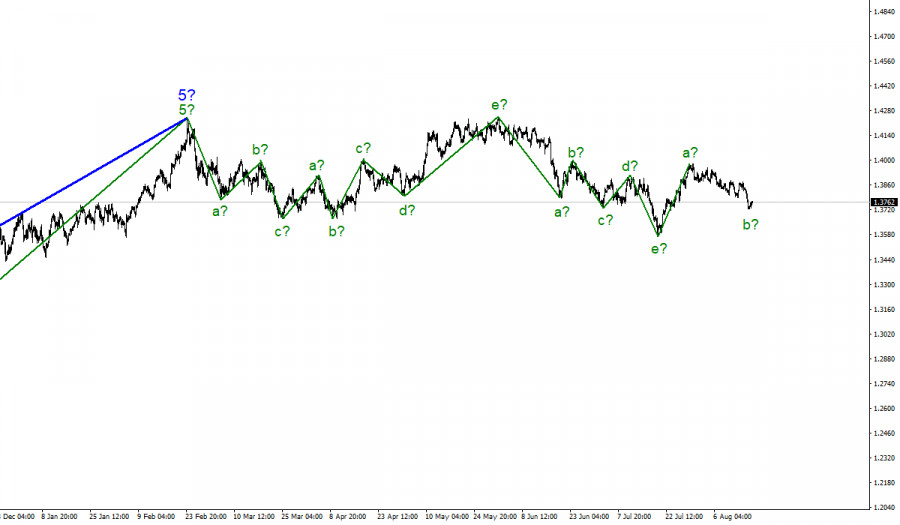 The upward part of the trend, which began its construction a couple of months ago, has taken on a rather ambiguous form and has already been completed. The new part of the trend may acquire an impulse form, its first wave has already acquired a rather extended form and exceeded the peaks of waves b and d. The chances of another strong increase in quotes are growing. If the information background does not interfere, then the quotes should go back to rising in the near future.

Interesting? Write a comment below.
 Analysis of GBP/USD. August 18. Inflation in the UK has fallen to 2.0%
Forward 
Backward 