Analysis of GBP/USD. August 5. The Bank of England did not make any important decisions 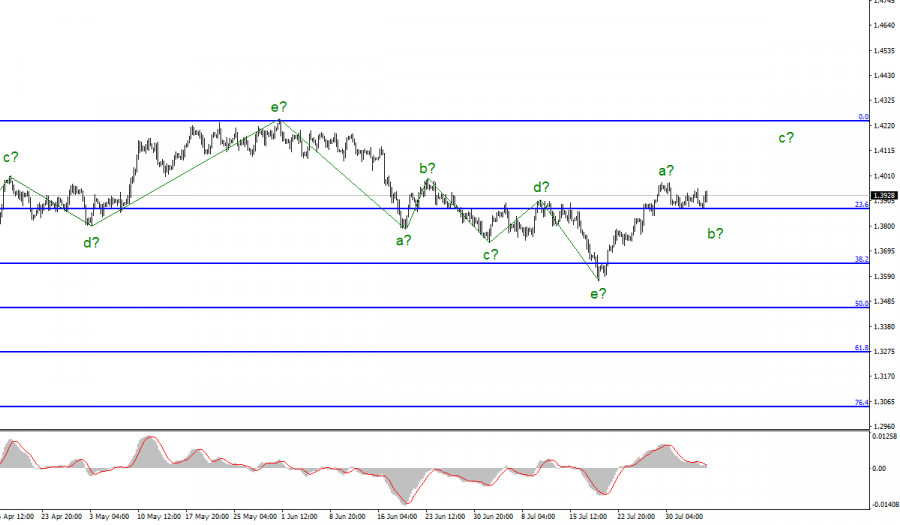 For the pound/dollar instrument, the wave counting has become a little clearer and clearer lately. The instrument continues to build a new upward wave, which now looks very convincing and absolutely does not fit into the wave counting of the previous downward trend section. Therefore, I believe that the downward trend is complete. Moreover, it took on a five-wave form. Thus, I now expect at least three upward waves to form. If this assumption is correct, then the rise in the instrument quotes will resume after the formation of a corrective downward wave, which we could observe in the last few days. However, at the moment wave b does not look complete yet, so the decline may still continue. The targets of the entire upward trend are located near the high of wave e. Therefore, I expect the instrument to rise by another 200-250 points. I also draw your attention to the fact that the new upward trend section may turn out to be impulsive, since its first wave already looks very impressive.

The pound/dollar rose 50 basis points on Thursday. The news background during the day was very strong, however, from what angle. If you look at the names of the events themselves, the news background was very strong. If you look at the content of this news, then no. The Bank of England (BoE) held its August meeting and did not make any important decisions. The key rate remained at 0.1%, while the asset repurchase program was worth $895 billion. No MPC member voted to change the rate and only one voted to change the volume of the QE program. Thus, the markets have been trading the instrument fairly routinely throughout Thursday. It should be noted that even earlier in the UK there was an index of business activity for the construction sector, which in July fell from 66.3 points to 58.7. That is, it practically collapsed. However, the markets did not pay any attention to this report. Consequently, the conclusion suggests itself: the rise in the British exchange rate is associated with a favorable reaction of the markets to the results of the BoE meeting. Since the instrument failed today to make a successful attempt to break through the 1.3870 mark, which corresponds to 23.6% Fibonacci, the rise in quotes can be continued within the framework of a new upward wave c. There were few US reports today and they had no effect on the mood of the markets. We are now looking forward to Friday, when statistics from America can greatly affect the current wave counting.

At this time, the wave pattern has become clearer. The construction of the downward trend is completed. I continue to count on the construction of a new upward trend section, therefore, at this time, it is possible to buy the instrument for each MACD signal "up" with targets located near the 1.4240 mark, which corresponds to 0.0% Fibonacci, for each MACD signal "up"... The instrument may have started plotting a correction wave 2 or b, so the instrument may go down for a while. 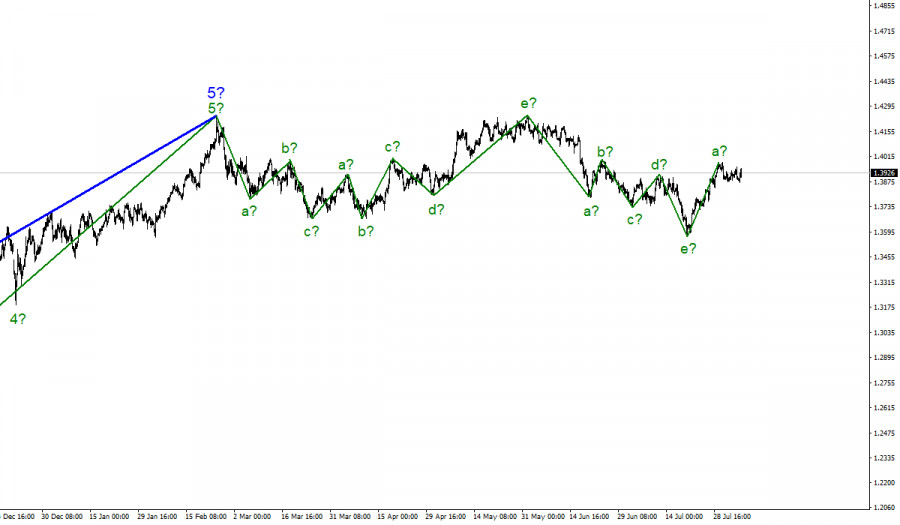 The upward section of the trend, which began its construction a couple of months ago, has taken a rather ambiguous form and has already been completed. A new section of the trend can get an impulse form, its first wave has already acquired a sufficiently extended form and exceeded the peaks of waves b and d. The chances of a new strong increase in quotations are growing.

Interesting? Write a comment below.
 Analysis of GBP/USD. August 5. The Bank of England did not make any important decisions
Forward 
Backward 